It’s 2013 and we now have Star Trek Into Darkness, a film I’ve waited 4 long years to see. After the success of 2009’s Star Trek I knew that a sequel was coming. This new film looks bigger and darker than before, plus it has Benedict Cumberbatch as the villain, how could the film fail right? So does this film succeed in being awesome or does fall short of the previous film’s quality? Read on and find out!

So the story for this film is as follows:

“After the crew of the Enterprise find an unstoppable force of terror from within their own organization, Captain Kirk leads a manhunt to a war-zone world to capture a one man weapon of mass destruction.”

I really liked the story in this film, it was basically an epic game of cat and mouse between the members of the Enterprise and John Harrison. It was crafted in a lovely way with a great deal drama, danger, mystery and sacrifice. The story in this film takes place not to long after the last film and has some great connections to not only the last Star Trek film but other films in the series and the TV show. There was some great developments for the returning characters as well as the new ones who make their mark in this film. The pacing was good and at not point did it feel like the plot was dragging though at first as good as the story was it didn’t get really good until John Harrison came to the forefront of the story. 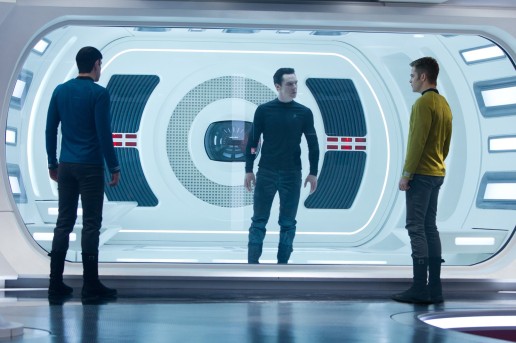 While the story is great, it is the cast that brings these characters to life and makes you care about the events that’s taking place around them. So let’s start with the returning cast starting with Chris Pine as James T. Kirk. I loved Pine as Kirk in the last film, his new interpretation on the character and the transition into the on from the original TV show was great and he continues his good acting in this new film. Here Kirk has a lot more of an emotional story arc and it really tests him as not only a person but as a leader of his crew. And then there’s Zachary Quinto as Spock was simply fabulous! I thought he was incredible in the last film especially with his more emotional interpretation of the character and in this film it is taken to new heights, Quinto was made for this role and really has some great moments verbally and physically too. Also I like how the relationship between Kirk and Spock was still at the forefront of the film and was developed even more than before, Pine and Quinto still have incredibly good chemistry. 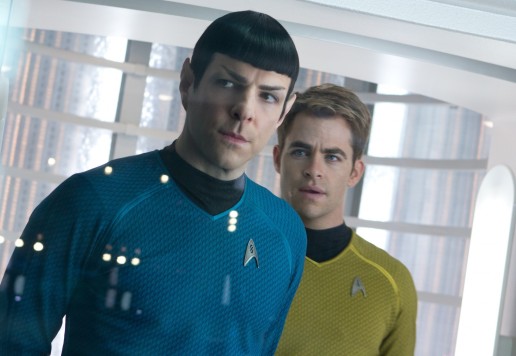 As for the rest of the Enterprise crew their still all on top form. Karl Urban as Dr. Leonard “Bones” McCoy is still funny, enjoyable and has good screen time with Kirk. Zoe Saldana is still hot and efficient as Nyota Uhura and Simon Pegg is still awesome and hilarious as Montgomery “Scotty” Scott too. Also John Cho and Anton Yelchin are still cool as Hikaru Sulu and Pavel Chekov. Even Bruce Greenwood as does great returning once again as Christopher Pike.

As for the newcomers, Alice Eve and Peter Weller add some interesting elements to the story as Carol Wallace and Starfleet Admiral Alexander Marcus.

But the standout performance has to be from Benedict Cumberbatch as John Harrison, HE WAS A BEAST! That is the best way to describe him really. I loved his performance in this film, Harrison plays this former agent of Starfleet who’s now got a beef with them and wants to take down th organization. There is a lot of mystery surrounding his character and the less you know the better really because as the mystery unfolds you get to discover so much and it’ll be totally surprising. Cumberbatch is insanely badass in this film delivering lines and fighting people with intensity, fear and tenacity. Cumberbatch definitely sold the film for me, I thought he was a truly incredible nemesis for the Enterprise crew and he definitely made up for Eric Bana’s Nero in the last film. 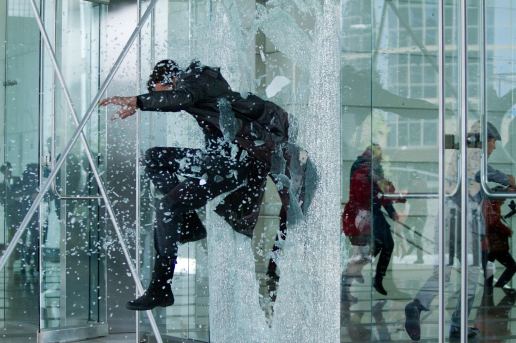 He’s such a badass, only badass people smash through glass like that.

When it comes to the presentation of Star Trek Into Darkness I would honestly say that it is pretty much on par with the 2009. Industrial Light & Magic still know how to make some damn good-looking CGI, there are some great scenes and sequences crafted whether they be on Earth, an alien planet or in space, wherever it is it looks incredible. There some truly epic and larger-than-life spectacles to take in from space battles to seeing the Enterprise in warp drive, it’s just awesome stuff! As for the soundtrack, Michael Giacchino returns as composer and he delivers some truly awesome music while retaining some of the themes from the previous film. There is a music for every scenario and it amplifies the film but ten times, Giacchino still knows how to craft music that is epic, godly, but also soft and emotional too. 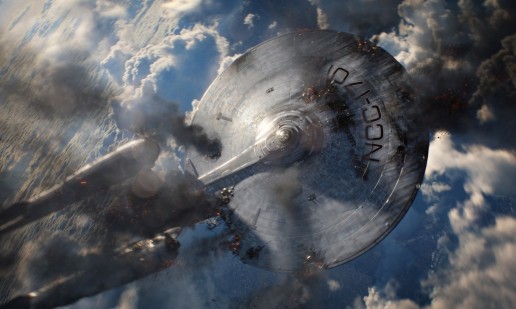 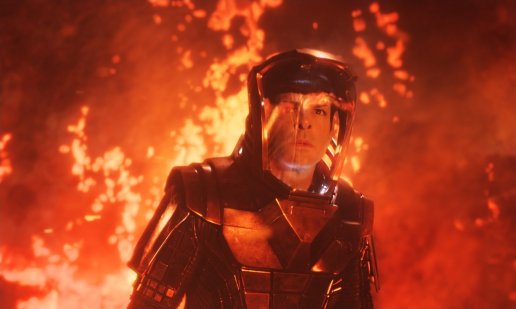 In conclusion Star Trek Into Darkness is a cracking sequel to the 2009 film which not only advances the story and characters from the before but presents much bigger challenges and threats that make the film so much more epic. While there are some elements of the 2009 film I like better, I can easily say that Star Trek Into Darkness is my favourite film of 2013. Go out and watch it now. That’s an order! 😀

So what did you think of Star Trek Into Darkness? Did you love, think it was alright or did you hate it? Whatever your thoughts are drop me comment and let me know! Until the next review later on people! 😀