ONE PARAGRAPH REVIEW: Teenage Mutant Ninja Turtles: Out of the Shadows

Howdy people, it is review time again and today I’m reviewing Teenage Mutant Ninja Turtles: Out of the Shadows. Now I’m one of the few people that liked the 2014 Ninja Turtles, while it wasn’t perfect, but it laid the groundwork for a better sequel. And after seeing it I’m ready to pass judgement.

Here’s the thing about TMNT: Out of the Shadows, I’m indifferent to it, but also quite disappointed. I don’t know. There’s stuff that I liked about this film, but after I left the cinema yesterday I was thinking to myself “I think I lied the 2014 film better.” And that just felt weird to me. Out of the Shadows corrects a lot of the key problems with the last film, but at the same time retains some of the those same issues and creates new ones as well. What works in the film was the Turtles, like the last film the Turtles had the right kind of personalities and chemistry, and I also really liked the Michelangelo as he was quite funny and light-hearted. I also liked some of the references to the old cartoon, some of the action sequences, Brian Tee as Shredder (in the small capacity he was used) and Megan Fox and Stephen Amell were decent as April O’Neil and Casey Jones. However the story was just a little nonsensical with a good few plot holes, several moments of humour felt stupid, juvenile, awkward and insufferable, and while I know this film was clearly aimed at children, I did miss the slightly more serious tone of the previous film whereas this film was more kid friendly but in the worst possible way. And while this film featured a lot of fan service which was fun from a nostalgic point of view, in the grand scheme of things it didn’t add much to the overall film. Also Bebop and Rocksteady, those two, there fluctuated between being stupidly fun to being absurdly strange and annoying. Shredder was wasted, Casey Jones’ integration in this film was horrible, oh and it has to be said, Krang, what the hell man? They ruined him and his inclusion in this film was completely pointless. So to conclude Teenage Mutant Ninja Turtles: Out of the Shadows was decent, however it wasn’t as good as I would have hoped. While some of the action and Turtle moments were good, there were massive issues story, characters, tonal inconsistencies and a lack of good ninja-based action and hand-to-hand combat fights. Fans and children may enjoy this film, but for everyone else I can’t recommend this.

So have you seen Teenage Mutant Ninja Turtles: Out of the Shadows and if so what did you think of it? And did you prefer this one or the previous one? Please leave your comments below and I’ll see ya on the next review, laters! 😀

Good day to you ladies and gentlemen of the internet, time for my latest film review and that will be on the much-talked about film adaptation of Gone Girl, directed by David Fincher. I remember for months, long before this film’s release, I heard about this film every so often and I really wanted to know what the fuss was all about. I do like David Fincher films and Ben Affleck is always fun to watch, but from the way the reviews and media were hyping this film up, I thought it wasn’t going to meet the hype. So I watched it yesterday and now I’m going to pass judgement.

The story for the film can be described as the following:

“On the occasion of his fifth wedding anniversary, Nick Dunne reports that his wife, Amy, has gone missing. Under pressure from the police and a growing media frenzy, Nick’s portrait of a blissful union begins to crumble. Soon his lies, deceits and strange behavior have everyone asking the same dark question: Did Nick Dunne kill his wife?”

I loved how the trailers for this film only gave you a taste of the story that takes place in the film, these days it is rare for a film to leave something left to the imagination when seeing the full film but luckily there is so much more to this film and I thank the marketing team for what they chose to reveal before seeing the film in full. The film deals with themes of relationships, the view of people from the perspective of the media, moral justice and truth. What I appreciated about the film was the whole concept of the truth, what is it? How can it be defined? How much of it do people wish to tell? And how much do people want to believe. It’s hard to talk about this film without saying revealing specific details about the story, but let’s just say that the trailers paint you a picture of what to expect with this story about a man and the disappearance of his wife, but as you watch the film, your perspective on what’s going on changes completely and the film becomes a didn’t kind of tale altogether. I love the way the film cuts between past and present, the flashbacks are swift but are relevant to what is happening at the present. There was also a great deal of tension in this film, and many shocking moments throughout as well, which was another great aspect of this film. 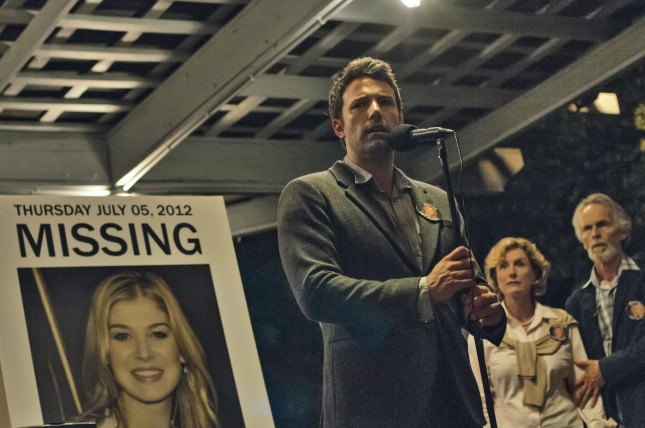 When it comes to the cast they were all very good. So let’s start with Ben Affleck as Nick Dunne. Nick is an average man who is then loses his wife and goes on a campaign to find her, however, from the outset he faces an uphill battle as it becomes apparent that the world is against him due police evidence, media coverage and members of the community, presenting things that put him in a negative light. Affleck was great, the man displayed a great range of emotions and the physicality of his movements only made him more believable. The guy was great, end of. The performance that really stood out for me was Rosamund Pike as Amy Elliott-Dunne, Nick’s missing wife. Holy mackerel, where did that come from? I mean I’ve always liked Pike as an actress and she’s been good in most films I’ve seen her in, but this is the first role where I’ve seen her have such a big part and do such an incredible job. People were hyping up her performance before the film had released and I thought she’d be alright next to Ben Affleck, but honestly her performance outweighs his by a lot. Without going into spoilers, Amy is a very complex and layered character and learning about who she is and how she interacts with her husband and other people was fascinating.

Tyler Perry was pretty good as Tanner Bolt, now I’ve not seen Perry in too many serious roles and I don’t care for most of his directorial pictures, that being said this is the best role I’ve seen him in for a while. He plays Nick’s attorney and the man is confident, humourous and realistic about things and I liked that he was in the film longer than I expected. Carrie Coon was very good as Margo Dunne, Nick’s twin sister who is pretty much the best sibling that anyone could ever hope to have in Nick’s situation. Margo is the moral support for her brother throughout his ordeal even after she becomes a subject of suspicion in the investigation involving Amy’s disappearance. Coon did an excellent job in her role. And there’s Neil Patrick Harris as who was good Desi Collings. This guy clearly doesn’t look too normal from the beginning and you know that there’s something dodgy about him and the way he operates and when he eventually comes into play in the film he has an interesting part to play and Harris was good, not overly memorable, but it was good to see him in a serious role for once.

Kim Dickens was also good as Detective Rhonda Boney, her character was interesting because she had to be objective when it came to the investigation about Amy, but clearly had personal feelings about the matter that she was trying to hold back. Dickens played her role pretty well and I thought that her acting reflected a realistic performance of what a police person would do in a scenario like the one in this film. Patrick Fugit as Officer Jim Gilpin was probably my least liked character in the film, I think it was due to his negative attitude towards Nick from the outset, sure it was part of his job, but it was also personal preference and I thought he was a bit of a douche. Fugit did well in the role, but I just didn’t like him. And finally I wanted to say I enjoyed the performances from Missi Pyle as Ellen Abbott and Scoot McNairy as Tommy O’Hara.

In conclusion Gone Girl is very smart and well-constructed film with a compelling story, good soundtrack and incredible lead performances from Rosamund Pike and Ben Affleck. While it isn’t my favourite David Fincher film, it is definitely in the higher tier of the list, and this is probably the best film I’ve seen since Guardians of the Galaxy and that’s saying something for me. I would highly recommend this film for anyone looking for a thought-provoking piece of entertainment.

So have you seen Gone Girl and if so what did you think of it? Also, if you read the book do you believe it was a good adaptation of the source material? Whatever your thoughts are be sure to drop them below and I’ll see ya on the next film review yo! 😀