Howdy ladies and gents of the internet, as some of you may have seen, in 2016 I started a film podcast entitled Film Focus and on this podcast, I talk about various topics in film and reviews as well on a biweekly basis. And the latest episode is a review of the latest video game film, Tomb Raider.

I’ve done already done my written review for Tomb Raider, however, as usual, there’s always more for me to say beyond my written material. I basically expand upon my thoughts in terms of what I like and what I don’t, and more specifically how the film relates to the game and what it gets right and what it doesn’t. It was also a fun episode to do because it was my 50th episode so I do get a little crazy at points, but hopefully, that won’t make you want to turn the episode off haha. 😛

As I mentioned before I’ll cover a different topic or review in each episode and since I don’t have much in the way of listeners or promotion, I’m here to spread the word about my podcast. 🙂

You can find my main site on Soundcloud here: https://soundcloud.com/film_focus

So if you have some spare time on your hands and would like to listen to the ramblings of a passionate/strange man then please check it out, and share it with your friends if they are fans of film discussion. Also, you have any feedback or if you’d be interested in joining in future episodes be sure to let me know, until next time, laters! 😀 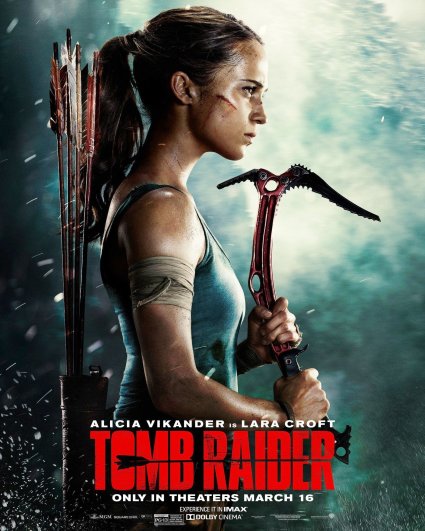 Howdy ladies and gents, time for a new film review and today I’m going to talk about the latest video game film, Tomb Raider. Now I could say a lot about this film but I will attempt to keep things brief this time around. So Tomb Raider, where to start? Well firstly let’s just get some background info out of the way:

So with all that out of the way what did I think of the film? It was fine, but it won’t break the video game film curse.

The story in the film involves a young woman by the name of Lara Croft who goes on a trek to discover what happened to her father who went missing years ago and uncover the mysteries surrounding his research. What follows is a journey of action, danger, self-discovery and interesting revelations. What I applaud the people behind the film for is taking so much of the 2013 game and incorporating into this film. The basic elements of the story, key locations and action set pieces were lifted from the game, and while a great deal was changed and streamlined, some of it was effective and I appreciated how much of that content was put into the film… That being said, the film features so many of the basic and cliché elements that made these big budget action-adventure films so average to watch. The story plays out almost exactly as you’d expect with certain twists and reveals you could see coming a mile away, the dialogue can be so cheesy and dull at times, and while some of the humour works, some of it really cringeworthy and there was one scene in the first trailer I prayed wouldn’t make it into the final film and just near the end it showed up and I was very sad haha. 😛 I’m only harsh on the story because the game had such a great foundation to jump off from and while there was only so much time available, certain story and character elements were needlessly omitted or changed resulting in a story that had less of dramatic and emotional resonance.

As for the cast they did their jobs well enough but none of the characters was all that unique or memorable beyond the main character. Alicia Vikander as Lara Croft was fine, she played the stubborn, smart and physically capable girl with issues relating to her past, she’s a fine enough hero with a great body and can handle herself in tough situations, but she doesn’t have that “je ne sais quoi” that makes a protagonist endearing. Dominic West as Lord Richard Croft was decent, though I wasn’t keen on how his character was handled in the story. Daniel Wu as Lu Ren was fine, I wasn’t sure how he’d fit into the overall narrative but it was revealed in a logical manner and I liked his character, but I thought Wu was underutilized considering his good work on Into the Badlands. Kristin Scott Thomas as Ana Miller was fine, and Walton Goggins as Mathias Vogel was okay as the bad guy, he did what he could with the material he was given, but it wasn’t a captivating or memorable villain, unfortunately. From a presentation point of view, the film has pros and cons. Visually, for the most part, the film looks good, most the visual effects are solid (safe for some questionable CGI and green screen), some of the action sequences were cool especially with the chase scenes, and like I said before, seeing several of the set pieces from the game implemented into this film did make me grin. And the film score by Tom Holkenborg was a little lacking in presence and didn’t do much to elevate the action on-screen.

So to conclude, I think most people reading this may think I hate the film but that is not the case. Tomb Raider a is a fine yet unremarkable film. I think there will be varying opinions about this film from fans of the games and those who are not. It does some things well and Alicia Vikander did a pretty good job in the main role, but alas the film’s story, action and characters are very plain and generic, and I think that there was so much material from the game that could have been adapted much better. Anyway, if you’re curious about this film give it a watch, it wasn’t as inconsistent as Warcraft and nowhere near as boring as Assassin’s Creed, but this isn’t the film to usher in the new era of video game films, nuff said.

So have you seen Tomb Raider and if so what did you think of it? Drop me your thoughts in the comment section below and I’ll see you in the next review, so until the next time, laters! 😀