Howdy ladies and gents, time for another review and today I’ll be talking about The Voices. Now this is a film I saw advertised on TV last week and decided that it would be worth a watch just because I was curious to see what Ryan Reynolds is up to these days. So is it good or not? Well read on and find out! 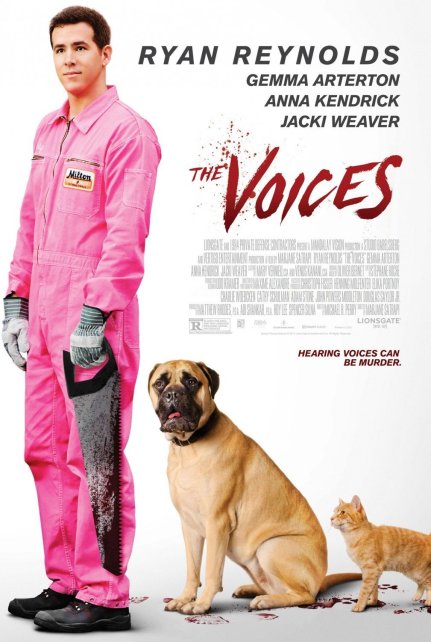 When it comes to the story it goes a little something like this:

“Jerry (Ryan Reynolds) is that chipper guy clocking the nine-to-five at a bathtub factory, with the offbeat charm of anyone who could use a few friends. With the help of his court-appointed psychiatrist, he pursues his office crush (Gemma Arterton). However, the relationship takes a sudden, murderous turn after she stands him up for a date. Guided by his evil talking cat and benevolent talking dog, Jerry must decide whether to keep striving for normalcy, or indulge in a much more sinister path.”

I thought the story here was pretty interesting, it was dark, creepy, violent, but also quite funny and bizarre. I got a lot of vibes from films like Filth, Life After Beth and Warm Bodies where life goes on as normal but there is a something questionable and out of the ordinary happening where people can’t see. At first I was wondering how the film would proceed and whether it would catch my interest, however, once the more dark and corrupt side of things take place the film definitely gets more interesting and as things go from good to bad and worse for Jerry, you just get curious to see how things will pan out in the end. There is a lot of creepy and atmospheric aspects to the story, but at time things can be quite funny as there are scenes and sequences that make light of such dark and dangerous situations. Oh, and the ending for this film, damn! I was not expecting it at all, I won’t say what happens, but suffice to say it was awesome.

When it comes to the cast they are all pretty good, but this film belongs to Ryan Reynolds as he does a terrific job playing Jerry Hickfang and some other characters. Jerry is a lovely, friendly, if somewhat confusing and strange individual, he operates in his own little world but just about functions normally when in the presence of others. At first you wonder what the deal is with him, but as the film goes on you come to understand him and while not all of his decisions are right, you do want to see him find peace. Reynolds is an actor who I’ve liked mainly after I saw Buried which is one of the most underrated films of 2010 and still is Reynolds’ best performance to date, and here he delivers another great performance. While Reynolds has a fairly recognisable face, I seriously didn’t see it that much, the man disappeared into the role and was really convincing as this mentally disturbed man and that takes talent.

Anna Kendrick was really good as Lisa. Any time I see Kendrick in a film I get quite happy, I’ve been a fan of hers since Up in the Air and every film I’ve seen her in, she turns in a good performance and the same can be said here. Kendrick plays such a sweet, innocent and light-hearted girl who pretty much wears her heart on her sleeve and has some fun times with her co-workers and Jerry. Gemma Arterton was also great as Fiona, I haven’t seen Arterton in many films since Quantum of Solace, but I’m glad to report that she is still 1) A very beautiful and attractive woman. But more importantly 2) That she is a very good and compelling actress with a lovely and likeable presence. As for Jacki Weaver she was brilliant as Dr. Warren, she was the doctor trying to help Jerry with his condition and trying to steer him in the right direction and Weaver handled the role like a pro, being calm and authoritative but also kind and understanding. Oh and Ella Smith was quite cheeky and nice as Alison.

In conclusion The Voices is a good film, since it isn’t a big budget film I feel like it will probably get ignored by the general public and that sucks because this is definitely one interesting film with a great central performance from Ryan Reynolds. It probably won’t appeal to everyone as it is quite disturbing and violent, however the intriguing story and good performances on display should not be missed out on.

So have you seen The Voices and if so what did you think of it? Please be sure to leave your comments below and let me know what your thoughts are. Until the next time, peace out peeps! 😀