Good day to you ladies and gentlemen, today I am back once again to give you a review of a gig I went to on Monday and it will be on the Red Hot Chili Peppers at The O2 Arena in London. Now I know that this review should have been out on Tuesday and the latest but I’ve been so busy with work, drawing and playing Final Fantasy XV and Pokemon Sun that finding the time to write this review was next to impossible. But regardless I just had to share my thoughts on the awesome night I had. 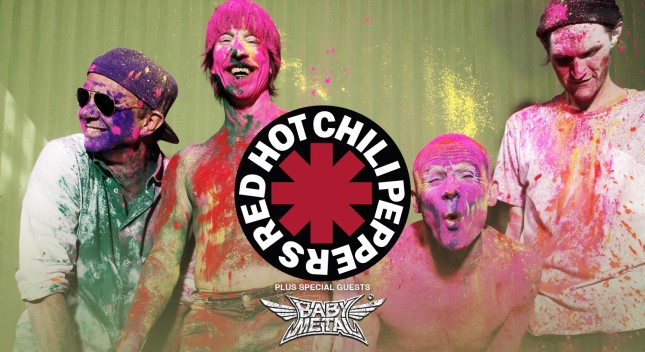 So for those not aware, the Chili Peppers are one of my all-time favourite bands and I saw them the first time back in 2011 when they were playing at Motorpoint Arena in Sheffield. It was a significant occasion for me because not only was I totally loving the I’m With You album, but they were also my first band I’d seen live. It was a beautiful session and it pretty much kicked off my love for live music. So fast forward 5 years, we have their latest album; The Getaway (which I really like by the way) and a new tour, so you knew I had to get on that, and the 3 months after I bought the tickets flew by pretty quick.

Before I get into the awesomeness of the RHCP, I’d be incredibly rude to not mention the supporting act; BABYMETAL who left quite the impression on me after their performance ended. Now this band I’d heard of through friends but I never really knew much about them besides the fact that they were a Japanese girl band who did metal music and I heard some of their music briefly while in Tokyo Toys in London last year, but they were still an oddity to me. However, seeing them live was one of the most different and unique experiences I’d ever have with a live music performance. Seeing all the musicians rocking out so heavy and loudly while these three again ladies ran around, danced and performed all these actions at the same time was mental. I’ve not seen a band so theatrical and charismatic like this ever, it felt like I was watching a butch of excited kids singing and moving around with such a cray level of energy, but they were so bloody cute, beautiful and charming. I was surprised by not only how much I liked the ladies, but also how much I got into the music considering that I’m not super into metal music. Overall they were great and I definitely will be looking into their music in the future.

But let’s move on to the RHCP, when they came on stage it was like the room set ablaze, the energy was completely on another level. And from there the band went on play a collection of notable and newer songs, but in between we got really cool jamming sessions between Flea, Josh and Chad and I adore those so much, they were varied, upbeat and kept the momentum going. I also have to comment on the presentation too, there was this awesome set of cylinder-shaped lights that lit up in various colours and moved up and down via cables and formed waves, big rectangles and other crazy shapes which was so cool. And then there was the screen behind the band that showed them playing with interesting colour filters or had these crazy abstract videos with “2D or cut out animation which was so strange and badass.

As for the set list it was really good, the band played 5 songs from their latest album, a few from By the Way, Blood Sugar Sex Magik and Californication, and one each from I’m With You, Mother’s Milk and Stadium Arcadium. When the band came on-stage and then started with “Can’t Stop” as the first song I lost my mind. That is my all-time favourite Chili Peppers song and to hear it first got everyone moving. Then from there was a lovely selection of songs and most of them I really enjoyed, though some definitely got me more giddy than others. Getting to hear “Dark Necessities” life for the first time was a lot of fun and hearing the sound of “The Adventures of Rain Dance Maggie” live again brought back memories of good times back in 2011, while “Go Robot” really got people moving and I loved hearing it live as it was still really groovy. My favourite choices included: 1) “Sick Love” I think it was both luck and fate that this song ended up being played, but my god I loved them for playing it as it was my favourite inital song off of The Getaway.  2) “Right On Time” is such a swift and beastly song and the fact that tit got played made me SO happy. ) 3) “Higher Ground” felt like the icing on a fantastic cake, its one of my favourite covers of any song in existence and hearing it live set my soul on fire! 😀 But the biggest happy moment I felt must have been from hearing “Under The Bridge“, for a while I thought to myself that there hadn’t been any songs from that BSSM so the band had to be saving it and sure enough they were, that is the song that sing together with friends or fans and it was absolutely stellar. I think the biggest responses the band got were from “Otherside“, “Dani California“, “Californication“, “By The Way” and “Under The Bridge” and “Give It Away“, those songs got everyone freaking out and singing along in unison. If I had any nitpicks I would say that sometimes I wish Josh’s guitar volume levels would have been turned up on a few of the songs, also I wished that Anthony would have reached just a little higher with his vocals on a few songs and finally I wish that I could have heard “Encore” and “Dreams of a Samurai” from the new album, but these are just minor nitpicks at best.

In the conclusion the Red Hot Chili Peppers at The O2 Arena was such a delightful time. As someone who had seen them before, I felt like time hadn’t passed and I was getting more great music and more of the awesome charisma, charm and badassery from the band members. The set list was good, the atmosphere was wonderful and the visual presentation was kick ass. Besides some nitpicks I had with some of the song arrangements, they pale in comparison to all of the great material that I experienced. If you’ve seen RHCP live let me know what you thought in the comments below, and if you haven’t seen them live you should, it is worth it for sure! 😀

Posted by Hypersonic55 on December 9, 2016 in Media, Music, Reviews