Howdy peeps and welcome to Day #30 of Month of Nostalgic Video Game Reviews 2! This is a blog series where I review video games from my childhood. And so it looks like we’ve come to the end of our series of nostalgic game reviews, but before we call it quits I have one more game to review and today’s game is a special one. Since we started this blog series on a Sonic game I thought we should end on one so today I’ll be discussing Sonic R for the Sega Saturn! 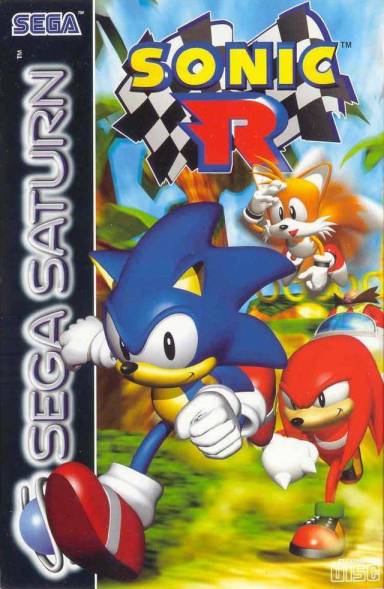 Sonic R was a racing game released for the Sega Saturn in 1997 and it was later ported the PC a year later.

This is a very different kind of Sonic game and while it’s not the first one to attempt the racing style of gameplay, this is the first game that allowed Sonic characters to race on-foot and use their abilities to get through the levels in 3D levels.

There are a total of ten characters to play as, only four are available at first where as the other six have to be unlocked. Each of the characters have different attributes such as speed, flight, weapons, etc. In terms of track you have the choice of five race tracks and you basically compete for the fastest time ahead of the other racers. Sonic R places an emphasis on jumping and exploration as each race track has multiple paths and hidden areas. The race tracks, while original in design definitely have similarities in art design and environments of classic Sonic games such as Sonic 1’s “Green Hill Zone” and Sonic 2’s “Chemical Plant Zone.”

During each race you’re able to collect items scattered in various areas on the tracks that bestow advantages. Rings are all over the place on tracks and a certain number of collected rings can give you a temporary boost of speed or open doors leading to shortcuts or special items. “Item Panels” bestow a random advantage such as speed increase or shields that grant abilities such as being able to run across water or attract nearby rings. Collection of other special items, such as “Sonic Tokens” and the Chaos Emeralds, may lead to the unlocking of secret characters.

Aside from the main game, there is also a “Time Attack” mode, where you can race solo to get the fastest time or tamper with the two player multi-player mode.

Sonic R for the Sega Saturn is a game I, honestly have a bit of soft spot for. Along with Sonic Jam this is the first Sega Saturn game I played at the age of 12. Sonic R was one of the games I really wanted to play for years but I couldn’t because I still had my Mega Drive and parents wouldn’t buy me a new console. Needless to say when I finally played this game I was I was surprised by how questionable the controls were, how short the game was too and I was pissed because I could never save my game because the console always reset my progress every time I turned the console off. Bullshit. But besides that stupid stuff I liked playing this game, I normally picked Tails because his acceleration was the best and had decent control, I mean Knuckles was the most well-rounded character but he was a lot slower. I really wanted to play as Sonic but he was too damn fast and uncontrollable. I mainly played this game once over in the main cup mode going for first place and avoided emerald hunting. I also played this a fair amount with my sister too in two-player mode.

What I really liked about the game was its sense of freedom, exploration and the fact that you got to race against other sonic characters on-foot. Once you got used to the controls and knew how to navigate the levels to find the shortest path was great. Also the presentation for the game was pretty good too, graphically for its time it was good, everything was colourful, sharp and a decent representation of Sonic-based stuff in 3D. And the soundtrack, the soundtrack for this game is generally something that most fans hate with a passion, however there are some that actually like it, like myself! I really like it. The soundtrack was composed by Richard Jacques along with singer TJ Davis and what they came up with was a very happy-go-lucky/cheesy collection of songs which partially relate to the levels themselves. Most people hated the music just because it felt like it didn’t have anything to do with Sonic games or because of the singer or because it didn’t feel like it belonged in a Sonic game. However for me I love some of these songs like Diamond in the Sky, Living in the City, Back in Time and Can You Feel the Sunshine are awesome, beautiful, heartfelt and nostalgic yo.

In conclusion Sonic R for the Sega Saturn is one of those games that’s either liked or loathed by members of the Sonic community. For me this game is a fun little distraction from time to time, sure its controls are questionable, the challenge is kind of hard and the game is seriously on the short side. But for all its faults there is still fun to be had and its a nice piece of nostalgia to partake in. I’d say try it out if you’re looking for a hidden and interesting Sonic game.

Well that is another game review done, THE LAST ONE! And so there we go, after 30 days all the video game reviews are over. Thank you coming on this nostalgia trip with me, it’s been a long month but thankfully you reader stuck around to check out my stuff and I thank you for it. As I’ve said before if you’ve had experiences any of the games I’ve reviewed do be sure to comment below! I guess I’ll see ya around yo! 😀