Howdy ladies and gents time for a new review and today I’ll be talking about Mad Max: Fury Road. This film has been the topic of discussion in the world of film for a while now and considering that all of the early reviews have been extremely positive, its sent my expectations through the roof. So I saw it yesterday and now I’m ready to pass judgement.

Here is the plot in a summary:

“In a stark desert landscape where humanity is broken, two rebels just might be able to restore order: Max, a man of action and of few words, and Furiosa, a woman of action who is looking to make it back to her childhood homeland.”

Overall the story was a really good. The narrative isn’t too dense, but what is on display is interesting and surprisingly deep and dramatic at points. Story-wise the film takes its cues from Mad Max 2 & 3 and has Max as a drifter and then come across people who he helps along the way. The story took a little while to get going for me, at first I was wondering where the story was going and when it would get interesting, eventually it picked up, got very interesting and by the end I was satisfied with the conclusion. While this film works well on its own, I feel like those who are familiar with the previous Mad Max films will get the most out of this new entry in the series. Much like when you’ve read a book or a comic that’s been adapted into film, you get to compare it to what has come before and enjoy updates, changes and references, and this film falls into that category for sure. This film draws from the older films, but Mad Max 2: The Road Warrior feels like the main reference for this film as there are clear easter eggs, story and visual cues taken from that film. Fury Road in a lot of ways feels like the spiritual successor to The Road Warrior, but with modern cinema’s quicker pace and that’s what I loved about this film.

When it comes to the cast they all do really good jobs in their roles. Tom Hardy as “Mad” Max Rockatansky is pretty cool, Max is one of those strong and silent types, doesn’t say much but when he does its for a good reason. Max is also haunted by images of his past which trouble him but in a way also guide him. Hardy brings a certain level of gruffness and physicality to the role and he’s good, but I wish I’d seen more of him in the film. Really it is Charlize Theron who steals the show as Imperator Furiosa. This is a character who is on a mission, has good intents and will stop at nothing to get it completed, even if it means making some dodgy dealings or shooting people. Theron has proved to be a chameleon in the world of film as she can get lost in many roles, and while you can see that it is her, she really is almost unrecognisable as this character and does such a great job being a badass. Nicholas Hoult does a good as Nux, he’s a super charismatic, funny and sympathetic a soldier who wants to be recognised by his leader and goes to great lengths to impress him. 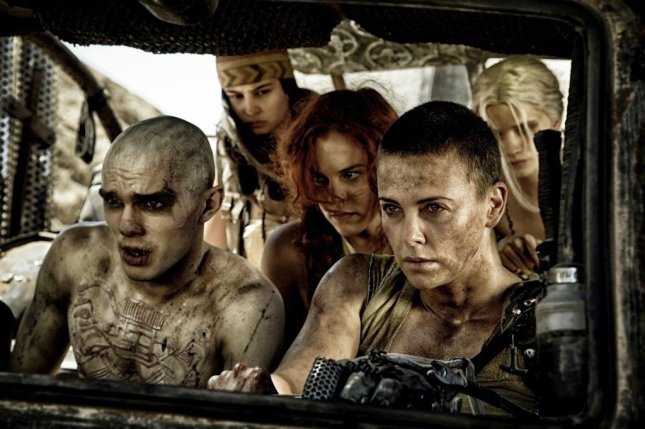 Hugh Keays-Byrne is awesome as Immortan Joe, to know that Bryne is back as the villain in this film like he was in the first Mad Max is just the most insanely cool thing ever, he was one of my favourite parts of the first film and here is subtly strange, crazy and merciless. Rosie Huntington-Whiteley as The Splendid Angharad was surprisingly quite good, of the Five Wives she was probably my favourite because of her importance and screen time. Whiteley has come a bloody long way since Transformers: Dark of the Moon, I almost didn’t recognise her and acting skills have increased a great deal too. Zoë Kravitz as Toast the Knowing (random name) was probably my next favourite because of mean persona and her action moments. Riley Keough as Capable, Abbey Lee as The Dag and Courtney Eaton as Cheedo the Fragile were fine. Nathan Jones was also good as Rictus Erectus and finally Melissa Jaffer was lovely as Keeper of the Seeds.

As for the presentation, what can I say, it was bloody brilliant! Everything about this film just screams of brilliance and insanity. Whether you are talking about the cool costume designs, interesting vehicles or that one guy playing that flaming guitar (who is awesome by the way), it is just so strange and attractive to the eyes. The visual side of this film is bloody impressive, the use of practical effects for all of the action sequences was so beautiful, so nicely choreographed and edited together and there are times when you’re just trying to confirm that you are watching exactly what you are seeing on-screen. I also loved the overall sense of style, colour scheme, cinematography and use of CGI the larger set pieces like that massive sandstorm scene. If I had one nitpick it would be that some of those sped up sequences were a little jarring and off-putting at first but eventually adjusted. Also the music by Junkie XL was really good, it was a very aggressive, loud and intense score and I proper got into the music in the car chase sequences.

In conclusion Mad Max: Fury Road is a pretty damn awesome film. The direction is solid, there is a delightful sense of style and madness, the performances are great and the film literally has some of the best practical action sequences I’ve seen in a long time. George Miller should be commended for being able to come back to this franchise after so long and being able make it work in the modern era of cinema and yet make the film feel in line with his previous Mad Max films. With that being said I still wanted a little more from this film and I wasn’t left in awe or speechless when I left the cinema. But I want to stress again that I really liked this film and I highly recommend it as it deserves to be seen by everyone.

So what did you think of Mad Max: Fury Road? Did it live up to or pass your expectations? Also do you think it is the best film of 2015 or not? AND do you feel like my thoughts on the film are fair or do you think I’m in denial about everything (say what you want, I’m ready to defend myself). Whatever your thoughts are be sure to drop them in the comments below and start the discussions yo! Thanks for reading, laters! 😀

Howdy ladies and gents time for a new trailer review and today I’ll be talking about the trailer for Mad Max: Fury Road. I have heard a lot about this film for many months, from the casting to the reshoots to the first images to the troubled production overall. The trailer came out yesterday and has left a fair amount of buzz on some of my regular websites, so I had to see what the deal is. But now we finally a first look at the film. Is it good or bad? Well read on and find out.

Here is the trailer:

Well damn, I’m kind of speechless after seeing that. That was a bloody insane, I was not expecting what I saw. At first there’s this sandy wasteland, long roads and off-screen talk of a lack of water and I’m thinking “Oh god, here we go again with the post-apocalyptic film where the world’s gone to shit and there’s a lack of proper civilized location, I’m tired of that.” But then you see these groups of people all dressed in such strange attire, very soldier-ish (if that makes any sense), some sporting metal masks and/or face paint. And then there’s the vehicles which look mad, some old-school cars with spiky bonnets, motorcycles and mini tanks. Tom Hardy and Charlize Theron look very rough and ready to kick some ass, and then there’s Nicholas Hoult, what the hell happened to him? He looks unrecognizable, I can’t wait to see what he brings to this film. And then there’s the use of music, that classical music really amplified the madness on-screen and gets you all excited, especially the song towards the end of the trailer, I don’t know the name of it, but I know it is popular. The visual imagery is bloody impressive, the action sequences look intense, the colour scheme and cinematography looks great and the use of CGI for those explosions massive clouds and sandstorms with lightning inside them, madness. I love it! The only thing I can fault the trailer for is the fact that Tom Hardy’s Mad Max doesn’t really say much and comes across as a bit of mute, moody hero with no unique or cool traits. That being said, it is th first trailer, I’m sure Hardy will have something to say. 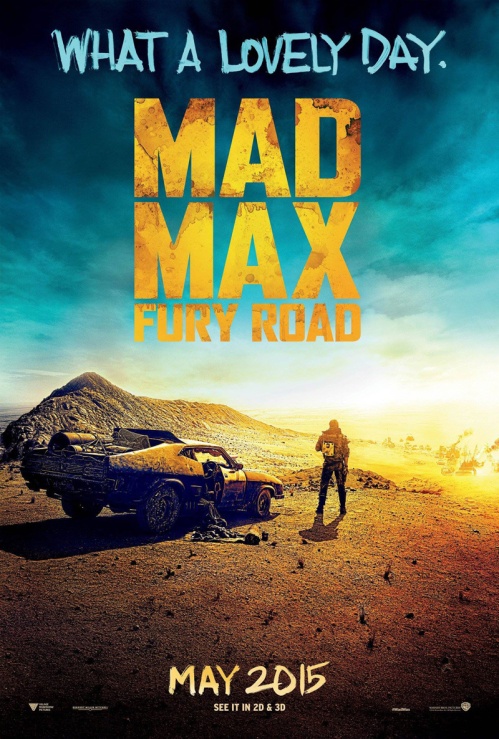 In conclusion the first trailer for Mad Max: Fury Road is pretty damn cool and interesting. This film honestly was not on my radar at all for 2015, but now that I’ve seen that trailer I’m sold. This film has my attention.Bring it the hell on, I’m down with it.

So what did you think of Mad Max: Fury Road‘s first trailer? Are you excited for it or not? Please leave your thoughts below and I’ll see you on the next review, laters! 😀