Good day to you ladies and gentlemen, time for another film review and today I’m finally gonna be talking about Maze Runner: The Scorch Trials, I was meant to see this opening weekend at the latest, but working and timing with my sister had prevented me from seeing it sooner. I really liked The Maze Runner last year, it was a much better film than I expected and even though a sequel was laid out for us at the end of that film, I was curious to see where the next chapter in this series would go. So fast forward a year and now we have The Scorch Trials, so is the film good or bad, well read on and find out! 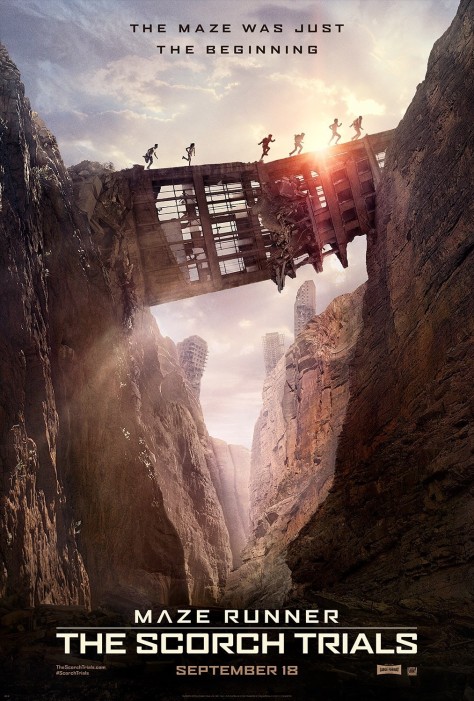 “After having escaped the Maze, the Gladers now face a new set of challenges on the open roads of a desolate landscape filled with unimaginable obstacles.”

I thought the story was good. Scorch Trials isn’t a rehash of the last film, instead it expands into the larger world with these special facilities and remnants of former cities where society have chosen to live. This film expands the mythology of the world, gives more context on the Flare virus and what’s needed to cure it and explores the history of Thomas and his involvement with WCKD. There was a lot of drama, tension and trust issues between not only the Glade people, but also amongst themselves. That being said there wasn’t too much that was significant or amazing about this story, and those who weren’t into the first film probably won’t care for this entry in the series either. 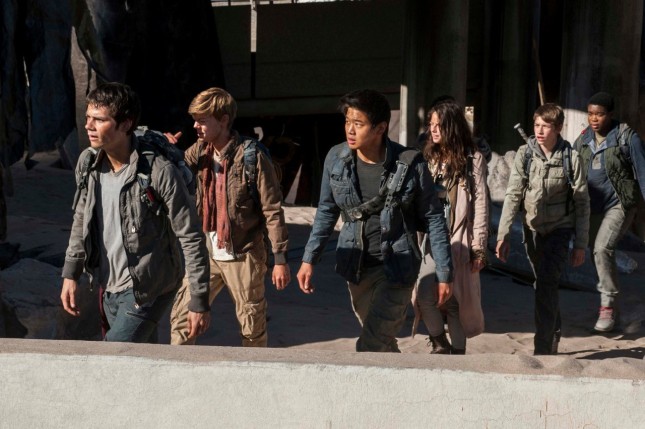 As for the cast let’s start with Dylan O’Brien who was good as Thomas, in this film Thomas is still the main source of a lot of the drama, mystery and danger that goes on in these films, but he’s also dubious of people trying to help him, wants answers to his past and wants to help people affected by WCKD’s schemes. I also liked Thomas Brodie-Sangster as Newt and Ki Hong Lee as Min Ho, both of them had some good moments to shine and be important, especially when it comes to Min Ho (my boy). I also enjoyed Dexter Darden as Frypan, and Alexander Flores as Winston. Kaya Scodelario did well as Teresa Agnes, her character was a little quiet and insignificant at first but then she became much more interesting later on. Also Jacob Lofland as Aris Jones was my favourite new character to come out of this film because of his resourceful nature and slightly odd interactions with people.

Then there’s Rosa Salazar and Giancarlo Esposito who were great as Brenda and Jorge, these two have a history together and I liked how they factored into the story and their interactions with Thomas were great too. Aidan Gillen as Janson, wow, this guy is charming, relaxed and full of info, but he’s also an undercover douche and you can tell from the beginning that something’s off with him. Gillen is just great at playing the bad guy and he does that very well in this film. Patricia Clarkson returns as Ava Paige and she’s just as cold-hearted and into her work as ever, and I enjoyed Lili Taylor’s performance as Mary Cooper, this character helped give more information about the world and connected more pieces about Thomas’ past. Alan Tudyk makes an appearance as Marcus and his character is pretty strange but very funny and enjoyable, Tudyk is just a guy that makes me smile and I love it when he has a memorable appearance in a film. And when it comes to the presentation, its good. Visually the film is good with some nice scenery, visual effects and action sequences too. 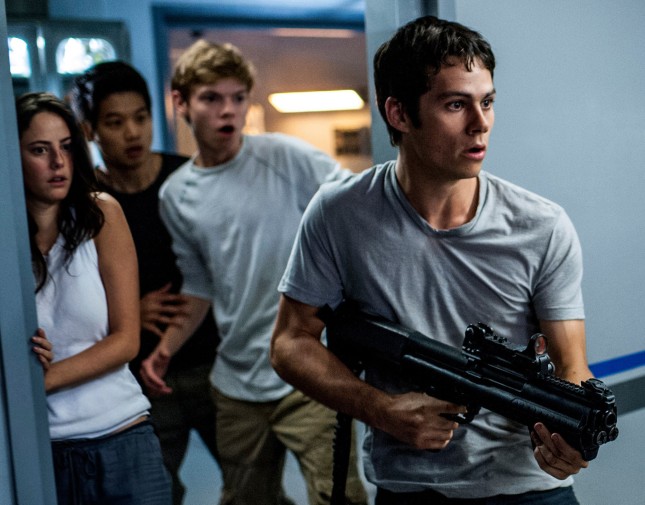 In conclusion Maze Runner: The Scorch Trials is different kind of film from the last one, however it is different in the right kind of way. The story is interesting, the performances are good and the action is pretty good. While it won’t convert people who were’nt fans beforehand, I believe that this is another solid film in this series and I hope that it’ll get a solid conclusion with the next film.

So what did you think of Maze Runner: The Scorch Trials? Whatever your thoughts are be sure to drop them below and let me know. Until the next time, see ya later! 😀

Okay time to review The East, a film looked very intriguing from the trailers and had me very interested for a good few weeks now. So I finally got around to watching it yesterday and I feel like I am ready to pass judgement on it so let’s go. So the story of The East can be summed up in the following premise below:

“A successful operative for an elite private intelligence firm is tasked with infiltrating an anarchist group known for executing covert attacks upon major corporations. However, she finds her priorities changing as she befriends the members and begins to develop romantic feelings for its charismatic leader.”

So while this film is very much about this group of young adult running around and punishing big companies for their effects on the environment and the animals and people that have suffered because of it, it is also about the operative Sarah Moss as she goes undercover and infiltrates the group for information. I thought that the premise for the film sounded great and for the most part the film delivers some great,complex and disturbing moments involving the big companies who have gotten away scott-free with their business’ without properly looking into the problems they’ve created. While the East group are corrupt and immoral in their approach to certain things, you can’t help but root for them sometimes, you can see where they’re coming from and you want them to succeed. But as the story develops complications arise, opinions change and people get hurt which throws everything out of balance. And it is at that point where some of those complications change the story from being really cool to being a little generic and silly. Some what happens in this film was just not what I was expecting and by the end of the film I feel like something more satisfying should have come out of all this.

When it comes the cast most of them do a good job at bringing the drama and emotion to the characters involved. Brit Marling as Sarah Moss was good, she played her role well being sneaky, unsuspecting and diligent and I liked seen the change in her character though she was a bit annoying and naive at times. Alexander Skarsgård as Benji was pretty good, his character was complicated, distant and strange, but I liked that about him, until he got involved with Sarah. Ellen Page as Izzy for me is probably my favourite character, she was the outspoken one, the person who always wanted to take action and was fairly perceptive of a bit aggressive and irritating. Page was great though and I thought her character stood out the most. Toby Kebbell as Doc was one of my other favourite people, his back story was deep and dark and I liked how it was revealed as Shiloh Fernandez as Luca was great, I thought his character was nice, funny and unexpected and Fernandez was a hell of a lot better here than he was in that shitty Evil Dead remake. And then were was good performances from Julia Ormond as Paige Williams, Patricia Clarkson as Sharon and Jason Ritter as Tim. 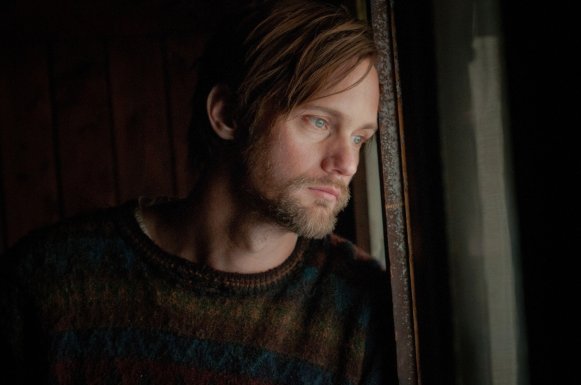 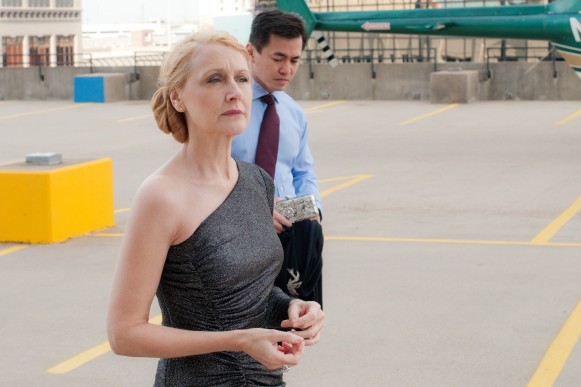 Presentation-wise the film looks nice and there’s not many problems in the way of cinematography or editing and the soundtrack by Halli Cauthery with themes by Harry Gregson-Williams is pretty nice too. 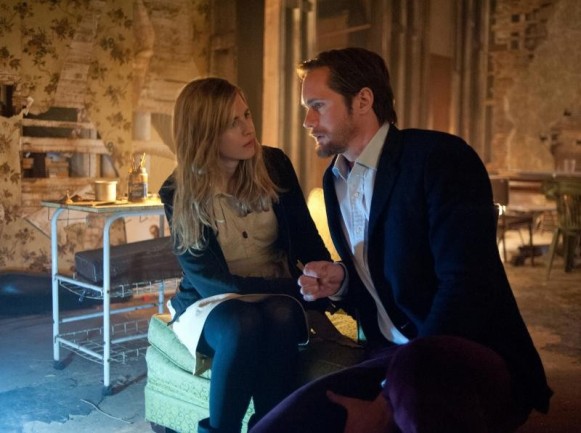 In conclusion The East was a pretty good film with some nice performances from Brit Marling, Alexander Skarsgård and Ellen Page and an interesting story. Though I feel like the film could have been better and the story panned out a lot differently than I expected and in the end I wasn’t totally satisfied with the ending too. However I would recommend this film to those looking for something a little different in the thriller genre, there is quality to be found here.

Rating: 7.5/10 (A few unexpected plot elements keep this film from being amazing for me)

So have you seen The East and if so what do you make of it? Whatever your thoughts drop them below and I’ll see ya on the next film review yo!