So now we’re finally here in April and Oblivion is finally out in cinemas! I have waited for months for this film to come out. Now I have been in two minds about this film since I saw the trailers, I believed it could either be really cool or pretty lame. I’ve been cautiously optimistic. I just want it to be a good and entertaining film because it has two of my favourite actors in it, Tom Cruise and Morgan Freeman. So is the film worth the wait or something you should pass on? Read on my review to find out.

The story synopsis for the film goes a little something this:

“One of the few remaining drone repairmen assigned to Earth, its surface devastated after decades of war with the alien Scavs, discovers a crashed spacecraft with contents that bring into question everything he believed about the war, and may even put the fate of mankind in his hands.”

I thought the plot for the film was pretty interesting. Even though the whole “post-apocalyptic Earth” thing has been done many times before this film’s story carried itself well and had me invested, also there was a lot of drama and emotional elements in some of the characters lives that I was not expecting to. The film does however lack a certain degree of originality as there were times where I made several references to film like Moon, 2001: A Space Odyssey Independence Day and Wall-E. Also there were story elements that I did see coming before the film presented them to me but for the most part I liked the story in this film I just wish the ending was a little more satisfying.

The characters in this film are pretty decent though the key performances that start out are Tom Cruise and Andrea Riseborough. Firstly let’s start with Tom Cruise as Jack Harper, Cruise was great. His performance was solid and engaging and you could see that he was haunted by his past and wanted to know more about Earth prior to the alien war. Jack, even though he repairs just repairs drones, patrol the skies and follows orders wants more and Cruise showed his acting skills well here. Plus the guy’s like 50 and yet he can run, gun and do all these action scenes which is bloody impressive, again I don’t like it when people hate on the guy when he puts so much effort into his work. The other great performance comes from Andrea Riseborough as Victoria Olsen. Riseborough was really great as the colleague of Jack who performed her duties and never asked questions about the past, there was many sides to this woman from her cute and flirty side to her affirmative side. There was a fair bit of emotional stuff for her character and Riseborough looked fabulous and acted very well against Cruise.

Also Melissa Leo as Sally was a performance that was could but also very scary too, Leo came across as so cold and non-human even when trying to be nice. And then there’s Olga Kurylenko as Julia Rusakova, she still looks beautiful these days and she served her purpose for the film giving emotion where possible, but I felt like her character could have done more and Kurylenko wasn’t as good as I hope she’d be. Now let’s talk about Morgan Freeman as Malcolm Beech, a resistance leader stationed on Earth. Freeman was his usual awesome self but was not in the film nearly as much as I would have hoped and was severely underwritten. The trailers made him seem like he had a massive part in the film but it’s actually smaller than Kurylenko’s. And lastly there’s Nikolaj Coster-Waldau as Sykes, its funny, I can’t look at him without seeing Jaime Lannister from Game of Thrones haha. But putting that fact aside he was alright but not in the film as much as I’d hoped.

As for the presentation, all I have to say is DAMN! The presentation is bloody awesome. The CGI and special effects were put to good use here, everything looked so incredibly detailed, vivid and beautiful despite the state of the planet. The action sequences were excellent and I also liked the art direction, the drones looked cool and the ship that Jack uses is also pretty awesome too. And then there’s the soundtrack M83 was great, it had a proper 80s vibe to it with the use of the instruments and I loved how loud and epic it sounded. 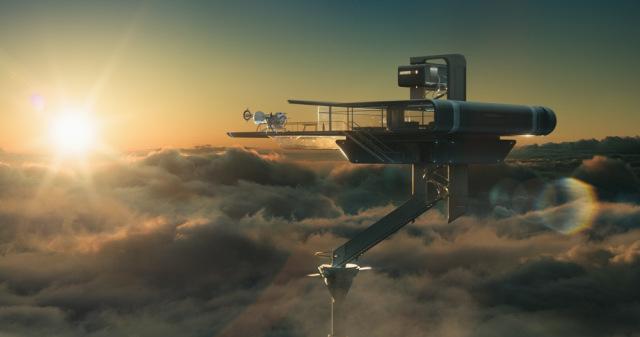 In conclusion Oblivion was pretty awesome. A lot of critics and audience members have bashed the film for the slower pace and lack of originality when compared to sci-fi films that preceded this one. However for me the story was surprisingly deep and intriguing, the cast was solid for the most part and presentation was top-class yo. If you’re a patient kind of film watcher and give this film a chance you’ll probably enjoy it.

Rating: 8/10 (Not perfect but definitely worth a watch!)

So what did you think of this latest sci-fi film starring Tom Cruise? Did you like it or dislike it? Whatever your thoughts lay them down below and I’ll catch y’all on the next review yo! 😀