Howdy ladies and gents people, time for another single paragraph review and today I’m finally, FINALLY getting around to talking about Bad Neighbours 2 (originally titled Neighbors 2: Sorority Rising in the US). Now I enjoyed the first film, and while I didn’t love it, I really enjoyed the carnage and humour that came from Zac Efron and Dave Franco especially. So when I heard there’d be sequel I knew I’d have to give it a shot. 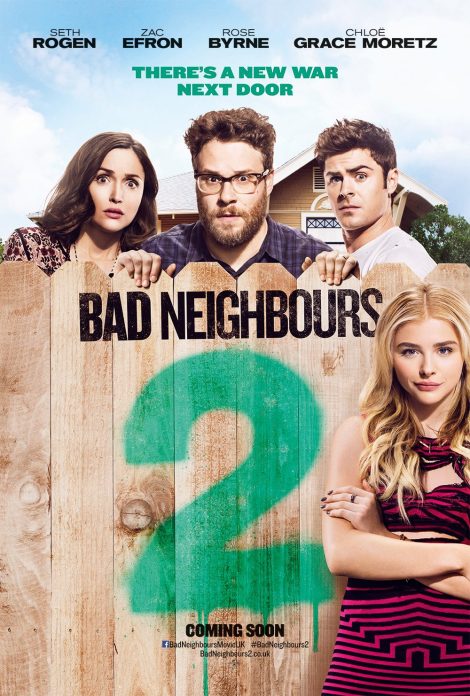 In a way Bad Neighbours 2 is essentially a retread of the last film with a few variations of the basic plot. In this film Mac and Kelly end up living next door to a new sorority who prove to be more troublesome than their previous neighbours, so they team up with their former enemy, Teddy, to bring the girls down. And what I liked about this film was that besides the fact that the humour was order-the-top, silly and full of all sorts of ridiculous situations, there was some heart and emotional themes relating growing up, friendship and finding your place in the world, and as someone who has experienced some of these same issues/anxieties it was pretty effective. With all that being said, not all of the humour worked and some of the emotional moments weren’t as effective as they could have been. When it comes to the cast the returning members did well and some of the new cast were cool too. Firstly Zac Efron (who was my favourite dude from the last film) returned in full effect as Teddy Sanders, and Efron had the same charisma and likability that made him so fun in the last film. Seth Rogen and Rose Byrne also returned as Mac and Kelly Radner, and they were just as strange and good as they were last time. Ike Barinholtz was also as Jimmy Blevins and seeing Dave Franco again as Pete Regazolli was nice even if his role was much smaller. Chloë Grace Moretz did really as Shelby, as she was not only fun and charming, however similar to Teddy, she had a pretty interesting and emotional character arc. And finally Kiersey Clemons as Beth and Beanie Feldstein as Nora had their decent individual moments, but weren’t as funny as some of the other cast members. In conclusion Bad Neighbours 2 was a good follow-up the original film and while not all of the humour and story elements worked, on the whole it was worth a watch in the cinema.

So that was my review, have you seen Bad Neighbours 2 and if so what did you think of it? Please leave your comments below and I’ll see ya on the next review, laters! 😀