Tag Archives: Master of None

QUICK REVIEW: Master of None Season 1

Howdy ladies and gents, time for another TV review and today I’ll be talking about Master of None Season 1. Before this show was released I was immediately interested because of Aziz Ansari, he was not a person on my radar until I watched Parks and Recreation and he killed me with his charisma and humour. However, when I heard and read about the format of the show I wasn’t sure it was for me, but since I had some free time during the week I watched all 10 episodes and I wanted to get my thoughts out about this show.

The show can simply be described as the following:

“The personal and professional life of Dev, a 30-year-old actor in New York.”

What I didn’t expect was how emotionally invested I’d get in this show. For all of the humourous and crazy stuff that goes down in this show, a lot of the stuff that Dev experiences is very relatable and true to life. Each episode’s title is a reference to the theme or key elements of that episode and it is surprising how many topics get presented. There are interesting themes covered like parenting, racism, infidelity, sexuality, feminism, and relationships between lovers and family. Whether it be the complications that come with being an aspiring actor, reconnecting with your family, the highs and lows of being in a relationship or the feelings of uncertainty when thinking about the future, this show covers those subjects in a very realistic and wonderful way. While some of the stories aren’t as riveting as others, I found all of the key stories involving Dev and his interactions with people to be incredibly engaging from start to the really great final episode which was so unexpected and emotionally fulfilling. Oh and I have to say that the choice of music was awesome with some really great with some of my favourite songs being featured at the intro of an episode or at other points of other episodes as well.

But what good would these stories be without its cast? This cast brings these colourful characters to life in fun and relatable ways, but at the end of the day they felt like fully formed people because of their realistic personalities and decision-making. Let’s start with Aziz Ansari who was awesome as Dev Shah, this man has an interesting and fun life, though he has issues with his personal and professional life that keep things engaging and challenging, and it was just fun to see him tackle these scenarios in ways that didn’t feel like network TV. Also great was Noël Wells as Rachel, this woman was smart, witty and not your conventional kind of lady and when she became Dev’s primary romantic interest things got even more interested. Wells and Aziz had such great chemistry and worked really together because of the humour and typical TV-based relationships. Eric Wareheim was also great as Arnold Baumheiser, this character was one of the more wacky/strange people to show up, but he was always very fun and his relationship with Dev was so chilled out, weird and relatable. Lena Waithe did such an amazing job as Denise, she was Dev’s lesbian friend who was always so cool and open about her sexuality, but not in the conventional way, but she was also very funny and gave great advice to Dev on numerous occasions. Kelvin Yu as Brian Cheng was also pretty good, but I wish I had seen more of him. H. Jon Benjamin was one of my favourite people as Benjamin, I’ve never seen Benjamin in anything live-action, but have recognized his voice work from years since Home Movies, Family Guy, Archer and Bob Burgers among other things, and in this show his character was really funny as Dev’s an acting colleague, but beyond that his character was very insightful and offered good life advice. Oh and Shoukath and Fatima Ansari did such great jobs as Dev’s parents, Ramesh and Nisha, especially with Ramesh, he was bloody hilarious with some of his dialogue. 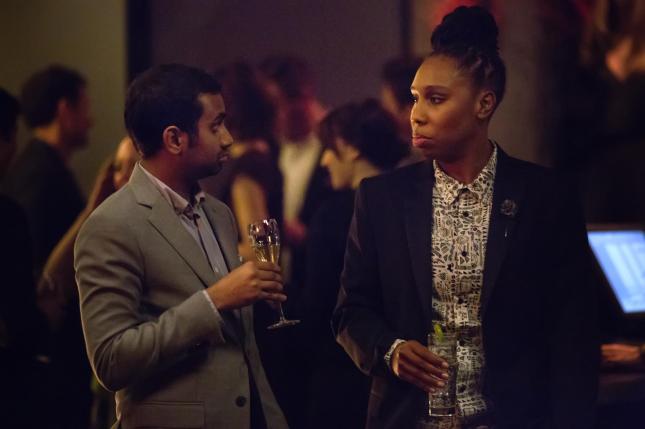 In conclusion Master of None is a very entertaining, fun and heartfelt tale of one man’s adventure in the city of New York experiencing the highs and lows that life throws at him with varying degrees of success. While the show didn’t have me laughing out loud like comedy shows that I watch, it was really was funny, but also surprisingly engaging on an emotional level and covering certain topics in a realistic and unexpected way.

So have you seen Master of None and is so what did you think of it? Please be sure to comment below and I’ll see ya on the next review, laters! 😀