QUICK REVIEW: In the Blood

Howdy people of the internet, time for another review and today I’m talking about a film I’ve wanted to watch for a while now, In the Blood. I remember when the trailer for this came out back in 2014 and was interested because of Gina Carano’s appearance as the main character, but missed it on VOD during its initial release. And since I had some time to spare before heading out tonight I thought I’d finally get it off my watch list on Amazon Video. 🙂 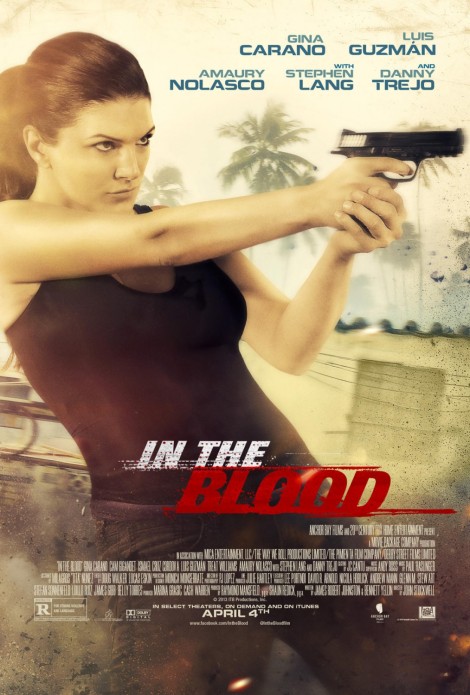 So the story in this film involves Ava and Derek, a newlywed couple who take a trip to the Caribbean on their honeymoon, but when Derek disappears after an accident, Ava goes on the hunt to find her husband by any means necessary.

The style of the plot is simple enough and was fun to watch at times, however it was needlessly complicated once certain mysteries come to light. The first thing that bugged me was the script as there were moments that could have been really cool, dramatic or surprising, but the scenes weren’t written well,  fleshed out enough, or they had such basic/lazy dialogue that lacked impact. Also while a film doesn’t have to spell everything out for you, there’s a difference between finding out information based on the details you are given and making assumptions to fill in the gaps because the film doesn’t tell you anything, and this film sometimes fell into the latter. For example, there’s a clear language barrier for Ava once she’s on the hunt in the Caribbean, but film seemed to address it whenever it wanted in the sense that when:

This happened a lot and was confusing and annoying as the film didn’t properly indicate to what extent that ava could speak or understand the language and vice versa for the people she encountered other people. And while the plot a little extra meat than expected in terms of the overall story it was a little nonsensical for my liking.

But let’s move away from the story and onto the cast. Firstly there’s Gina Carano as Ava who I liked a lot, now while som her emotional material could have used some work, you could see that she was at least trying and where she did succeed was in being a badass. She commanded the screen and had a magnetic presence when fighting or intimidating her enemies, and it also has to be said that she was gorgeous! 😛 I love Luis Guzmán and he had a pretty interesting role to play as Chief Ramón Garza, Cam Gigandet was alright but kind of plain as Derek Grant, Ismael Cruz Cordovawas kind of good as Manny, I also quite liked Amaury Nolasco as Silvio Lugo, and while it was fun to see Danny Trejo as Big Biz he wasn’t in the film nearly as much as he could have been.

When it comes to the action this was where the film shined. While the film wasn’t sure shot as well as it could have been for the fight scenes, overall there were some pretty cool displays of hand to hand combat and firefights which were nicely choreographed and violent.

In conclusion In the Blood was a fun little action film and proves that I’ll watch Gina Carano beat people up in any film, and while the story and script were a little generic and silly, it was servicable. 🙂

So have your seen In the Blood and if so what did you think of it? Be sure to leave your thoughts in the comments below and I’ll see ya on the next episode, laters! 😀

In the Blood Trailer #1 Review

Howdy people and it is once again time for another trailer review and today’s review will be on In the Blood, the next film with a leading role for Gina Carano. Now I happened to catch this trailer by chance and thought that there looked like there’d be enough to talk about, so here we are haha.

Firstly check out the trailer below:

Okay, this seems cheesy as hell, but it also looks like it could be kind of fun.

I mean sure the plot seems very similar to stuff we’ve seen before and there is a lot of absurd and random stuff going on with Gina Carano’s character and the shit she gets up to, but sometimes if handled correctly it can lead to some guilty pleasure fun.

The cool stuff in this trailer just involves Gina Carano running around and kicking ass and to be honest I’m fine with that. Apparently she did well in Haywire and I loved her fight scenes in Fast 6 and while this film doesn’t have the same kind of creative talent, it looks like Carano will still unleash hell on all of these guys. Other cool points to not about the trailer was  Luis Guzmán, love that guy and then there’s Danny Trejo, whenever he makes an appearance in any film you know you’re in for a good time or at least a guilty pleasure kind of time. 🙂

So was there anything I didn’t like about the trailer? Well firstly, any trailer that starts out with dubstep is just asking for trouble, it is such an annoying sound and doesn’t make any trailer look good, AT ALL. Secondly, Carano’s character seems to go to great lengths just to find out what happened to her husband, she better be a cop or something because a lot that stuff she’s doing to people can’t be legal or done by a normal lady. And lastly there wasn’t enough Danny Trejo, that guy is awesome.

In conclusion the first trailer for In the Blood looks decent enough. We have another film where Gina Carano is in a starring role and the action looks pretty mental. The only thing that concerns me is the story, looks very similar to stuff I’ve seen before. This film could just end up being something average or bad, but I’m just hoping that it’ll be good film and that it’ll advance Carano’s acting career a bit.

So what do you think of the second official In the Blood trailer? Whatever your thoughts are, drop them in the comments below and I’ll see ya later! 😀