Dawn of the Planet of the Apes Review

Howdy people of the internet, time to review a film I’ve been waiting to watch for AGES, I am of course talking about Dawn of the Planet of the Apes. Rise of the Planet of the Apes was one of my favourite films of not only 2011 but also of the last few years and I was so hyped for what would happen for the future of this new film series. The trailers have all looked great and the early reviews have just put me in a good mood. So how has this sequel turned out? Well read on and find out! 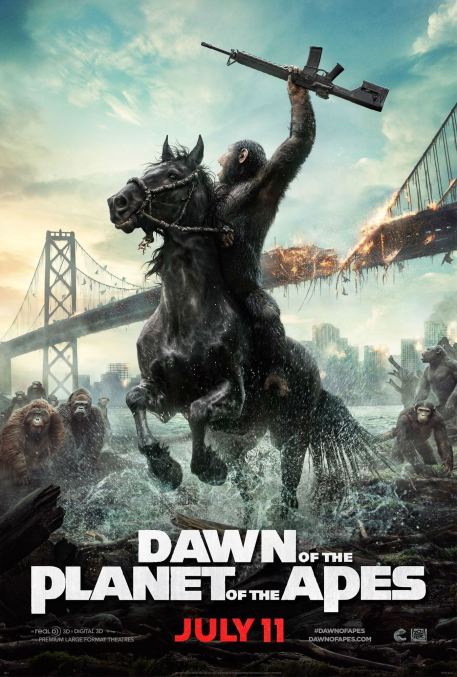 Here is the film’s story in summary:

“A growing nation of genetically evolved apes led by Caesar is threatened by a band of human survivors of the devastating virus unleashed a decade earlier. They reach a fragile peace, but it proves short-lived, as both sides are brought to the brink of a war that will determine who will emerge as Earth’s dominant species.”

This film is pretty damn good as it tells an intelligent, dark, grim and unsettling tale of survival between two species when they unwillingly collide. This film is really grim with barely any happiness in sight, there is violence, war and death and the level of tension throughout the film is so intense that it will leave you gripping you gripping your seat just waiting to see what happens next. It is clear from the outset that both the humans and apes want to survive, but within their ranks some want peace while others want war and it is cool to see the parallels between the apes and humans. The film is also very tricky and throws you a good few curveballs to keep you from guess what will happen next and just when I thought something was going to happen one way, it totally changed direction which was fun and exciting.

As for the cast they are all pretty good, but it should be noted that after the film is over you’ll only remember two characters because of their awesomeness. So let’s start with the first of those characters in the form of Andy Serkis as Ceaser. Now Ceaser is character we got to see grow up and learn to find his place in the world in the last film, here he is a leader. The ape’s grown up, he’s the head of tribe of apes and he’s a family man and it quite beautiful and nice to see how far our hero has developed. We see in this film that Ceaser wants to keep his ape clan united, doesn’t want to fight humans and strives for peace, but due to the complications involving humans and apes within his group he is forced to make very tough decisions. I loved seeing the emotional complexities of this character and seeing how far he would go to help humans but also protect his people. Andy Serkis did such an amazing job in this role and he is making it harder to distinguish the difference between performance capture and normal acting.

The other major character who kicks as is Koba played by Toby Kebbell. Damn this character stepped up, I knew from the trailers he would have a bigger role in this film than the last, but his character is just as important as Ceaser in terms of where the story goes. Koba despises humans because of the torture and experiments they did on him in the past, he even has the scars to prove it and while he is loyal to Ceaser, he cannot accept the coexistence of humans and apes and goes to great lengths to make sure that he gets his revenge on them. Koba is mean, he is a dangerous, corrupt and crazy individual, but for all of his wrongdoings you do feel some compassion for the guy because he has had a my crappy life, he’s suffered at the hand of humans and since Ceaser is showing them mercy where he didn’t get any in the past obviously he’s gonna be pissed. Kebbell did such a great job with this character and I’m glad that he was the one to flesh out this character. 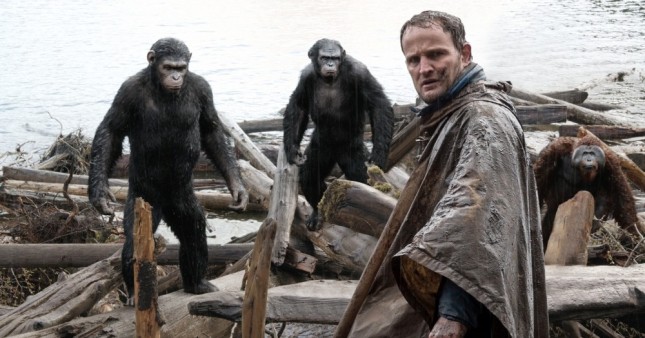 The humans don’t fare as well as the apes as they are not nearly as memorable and for me aren’t as interesting as the cast from the last film bar a few individuals. Jason Clarke is the best of the human characters as Malcolm, a man who has many similarities to Ceaser as he too is a family man and only wishes to coexist with the apes. Malcolm is a courageous and strong individual who goes to great lengths to try and keep things under control even when the situations he’s in are going south fairly quickly. Gary Oldman as Dreyfus was good but severely underused, I love Gary Oldman, any time he’s around you are in for a good time, however while I understood his character’s motives, at the same time he wasn’t in the film nearly as much as I would have liked. Kodi Smit-McPhee as Alexander and Keri Russell as Ellie did their parts well but I wasn’t overly fussed about them. The last mention I want to give is to Kirk Acevedo who played Carver, now this guy was a douche, he pretty much doesn’t care for the apes and blames them for everything that has gone wrong for the humans and his actions pretty set off sparks between humans and apes. I love Acevedo as Charlie from Fringe but here is so cruel and foolish, such bad guy.

When it comes to the presentation it is simply incredible. Visually this film is insanely beautiful, the CGI work by Weta Digital is nothing short of amazing, they have created incredible environments and along with the motion capture work they’ve brought the apes to life in a way that is so realistic, you actually forget that you’re watching CGI apes. Couple these great visual effects with some lovely cinematography and an interesting colour schemes and you have a wonderful-looking film. Also the soundtrack by Michael Giacchino is pretty cool too, the more subtle and tension-filled themes were among my favourites and use of the wooden xylophone was so cool, but I will say that while I am a massive fan of Giacchino this isn’t one of his memorable soundtracks.

In conclusion Dawn of the Planet of the Apes is easily one of the best films not only of the summer but also of the year. While the film didn’t turn out the way I expected, the film is still one of the most engaging and dramatic blockbusters we have gotten for some time and while Michael Bay continues to throw dumb and soulless material at audiences with Transformers 4, this happens to be a the total other end of the spectrum. I highly recommend that you go out and see this film as it is SO good and worthy of your time.

So what did you think of Dawn of the Planet of the Apes? Did it make you happy or make you sad or angry? Whatever your thoughts are I’d love to read them, so be sure to comment below so we can start some discussions yo! Laters. 😀