Howdy people of the internet, time for another review and today I’m going to be talking about Spotlight. I first heard about this film during a live Q&A with Mark Ruffalo on Facebook a few months back and once I saw the trailer I was interested, and then when all the Oscar buzz started floating around I really got hyped. So I saw it last night and now I’m ready to pass judgement. 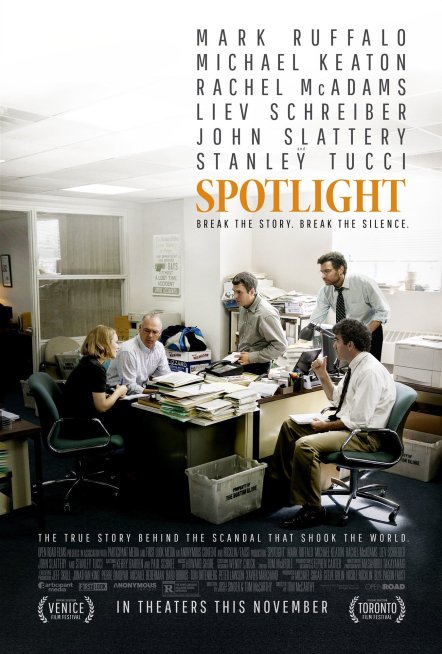 “The true story of how the Boston Globe uncovered the massive scandal of child molestation and cover-up within the local Catholic Archdiocese, shaking the entire Catholic Church to its core.”

I thought this was a fascinating tale of conspiracy, corruption, and the search for the truth, and it was handled with a great deal of detail and care. I will admit that at first the story was interesting but not all that engaging when the news team began their investigation into the questionable priests and victims, however, there was a point when a major revelation gets dropped and then the film had my attention. And from there the level of damage and cover ups done by the church and legal system just got larger and larger, and the depths of the moral and ethical corruption went so deep that it becomes emotionally engaging and heartbreaking to know that this actually happened. Watching this film made me feel dirty and it wasn’t just because priests had their way with children, but it was because of the system they were part of and how they allowed it to happen and went to great lengths to keep it from going public. While some of the details were a little hard to follow because there’s a lot of history and individual stories to take into consideration, it was balanced very well.

The cast was fabulous and this was certainly a case where you could say that this was a team effort as there wasn’t a single bad  performance. When it comes to the Spotlight team Michael Keaton was great as Walter “Robby” Robinson, I really enjoyed seeing Rachel McAdams who was wonderful as Sacha Pfeiffer, and Brian d’Arcy James was really good as Matt Carroll, but Mark Ruffalo as Michael Rezendes stood out the most, Michael was very passionate about this issue and to see him get so worked up and emotionally invested made me root for him. Liev Schreiber’s calm yet stern demeanour worked well as Marty Baron, also John Slattery did a great job as Ben Bradlee Jr. and Stanley Tucci was fantastic as Mitchell Garabedian, an attorney who had a lot of knowledge of the corruption of church activity but a fair amount of issues to deal with professionally and personally.

So while Spotlight wasn’t the mind-blowing, amazing film that some critics made it out to be, it was an incredibly dramatic, intriguing and unnerving and it’s a film that I believe everyone should watch because it has a story that needs to be seen.

So have you seen Spotlight and if so what did you think of it? Be sure to comment below and I’ll see you on the next review, laters!