ONE PARAGRAPH REVIEW: In Bruges

Howdy ladies and gents, time for another quick review and today I’m talking about In Bruges. So this is a film I’ve been meaning to watch for a while now, I’ve not only heard a lot about it via some film critics/fans I follow online, but also from my mate at uni who told me to check it out back in 2012 or 2013. So is this film a good watch or not? Well read on and find out! 😀 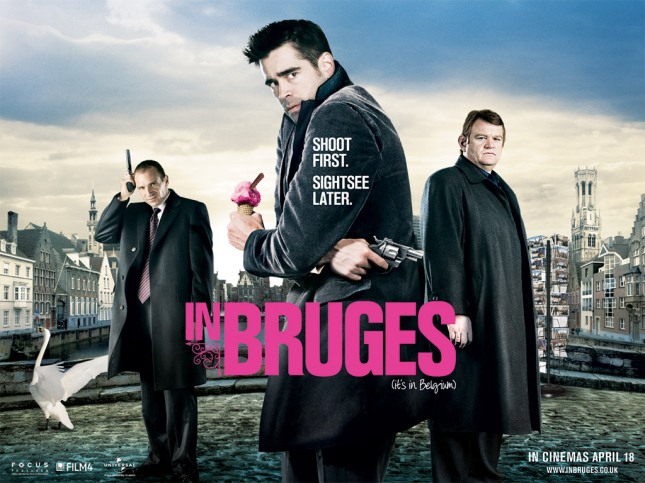 The plot can be summed up as the following: “Guilt-stricken after a job gone wrong, hitman Ray and his partner await orders from their ruthless boss in Bruges, Belgium, the last place in the world Ray wants to be.” I have to say that was engaged from the beginning due to the fact that I not only liked the two main actors but also because of their current situation. They had essentially come from a hitman job that had gone wrong in the UK and had to lay low and wait for instructions, and while it wasn’t clear what had happened yet. I liked the mystery that surrounding these characters and suspense surrounding the call from their boss, Harry. While it was fun to get to know both characters and see their differences in personality, I wasn’t super captivated by the story. I was interested but was waiting for something to hook me. And then when you found out what happened with Ray and why these characters are in their current situation, that’s when the film got me. And from there, what followed was a series of unexpected scenarios that ranged from being hilarious to shocking to strange and crazy. I liked the film’s sense of humour, it was dark, twisted and blunt and while not all of the dialogue landed for me, some of those lines were frigging funny as hell, and luckily the humour never came at the expense of the serious moments as it was well-balanced throughout the film. The cast was great. First you have Colin Farrell as Ray who is a charismatic, straightforward and rude kind of guy who I found  little funny but mostly unlikable for a while, until I saw what happened to him in the past and how he acted around some other characters, he isn’t a complete douche, he has a heart and can be good occasion and Farrell was just delightful. Brendan Gleeson was great as Ken, I have yet to see a film where Gleeson disappoints me and the same rules apply here, he’s serious, yet witty and is a nice counterbalance to Ray. Farrell and Gleeson have great chemistry, they’re like an old married couple bickering, but you can see that there is a solid bond there. But it might be Ralph Fiennes who steals the show as Harry. Good gravy, what a guy! From the time he’s introduced via a phone call he leaves a solid impression, and from there he has so many scene-stealing moments with his magnetic presence and his hot and cold personality, he’s cool, but when you piss him off he’s merciless and crazy, and this might be one my favourite performances from Fiennes ever because he reminded me of Ben Kingsley in Sexy Beast. I also enjoyed Clémence Poésy who was delightful as Chloë Villette and Jordan Prentice brought some good humour as Jimmy, and I also liked Thekla Reuten as Marie and Jérémie Renier as Eirik. In conclusion, In Bruges was a film I enjoyed far more than I expected with interesting themes, great performances, good humour, a really nice and melancholy film score and unexpected revelations.

So have you seen In Bruges and if so what did you think of it? Leave your thoughts in the comments below and I’ll see ya in the next review, laters! 😀

Posted by Hypersonic55 on December 7, 2017 in Film Reviews, Reviews