ONE PARAGRAPH REVIEW: The Circle

Howdy ladies and gents, time for another quick review and today I’m talking about The Circle. Now I was really excited to see this film back in January of this year, however, once the film was released and got average to bad reviews, it left me a tad disappointed so I gave the film a skip. But once it showed up on Netflix not too long afterwards I put it on my watchlist with the intention to see it before 2017 ended. So is this film a good watch or not? Well read on and find out! 😀 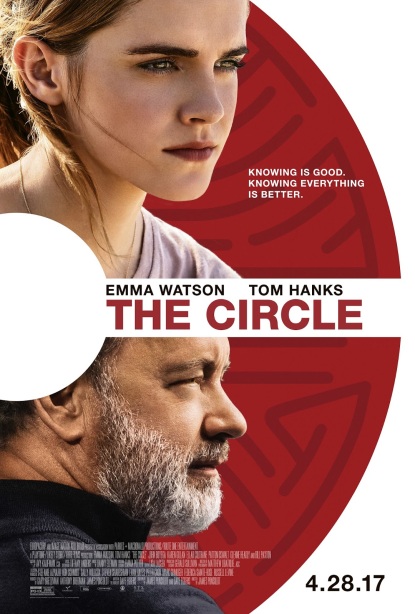 The plot can be summed up as the following: “A woman lands a dream job at a powerful tech company called the Circle, only to uncover an agenda that will affect the lives of all of humanity.” Firstly the film’s plot reminds me a lot of an episode of Black Mirror, just without the mystery, subtly, intrigue, depth and unsettling nature. The story was interesting and had some really great elements in the beginning and certain moments throughout, but as the story went on, things just went in strange and bizarre directions, and by the end, it felt weird that that’s how everything wrapped up. It was interesting to learn about The Circle, their innovations and the subtle/not so subtle plan to essentially see everything everyone is doing anywhere in the world. This film felt like what could potentially happen in real life if certain companies and individuals took social media and transparency and amped it up to a ridiculous degree which was certainly engaging and scary at times. That being said some of the dialogue and scenarios that play out didn’t feel very realistic like it was artificial and took place in some heightened version of reality instead of being a plausible future. When the plot ended I felt unsatisfied, like certain plot and characters elements were brought up only to be forgotten or used in a minor way. The cast was solid however some of them weren’t utilised to the best of their abilities. Firstly there’s Emma Watson as Mae Holland, Watson was good, and at first, you’re on board with her character, however, as the film continues she sort of changes into a totally different character capable of making decisions that seem unlike her. We’re given no sense of progression towards this change and even though she discovers a lot of bad stuff and ends up in some bad situations, she preserved making some bad decisions that made her hard to root for. Tom Hanks was good as Eamon Bailey, Hanks has a warmth and captivating presence that makes him likeable even when he’s playing not so nice guys, and even though we’re meant to like this guy, you can tell that something’s off through some of his dialogue and facial expressions. I liked Karen Gillan as Annie Allerton, she was very bubbly and energetic, but also had some dramatic moments too. John Boyega as Ty Lafitte was good but very underutilised, Patton Oswalt as Tom Stenton was good but like Eamon you could see he’s dodgy from the time he was introduced, and Ellar Coltrane as Mercer, Coltrane was fine in the role but the character was so dull and uninteresting that I didn’t care much about him until a key moment later on in the film. And finally, the late Bill Paxton and Glenne Headly played Mae’s parents Vinnie and Bonnie Holland, they were both good in their roles. In conclusion, The Circle was a film with an interesting concept but lacks a compelling story with a weak sense of direction and some questionable plot choices, it wasn’t the worst film I’ve seen this year but it could have been better.

So have you seen The Circle and if so what did you think of it? Leave your thoughts in the comments below and I’ll see ya in the next review, laters! 😀

Posted by Hypersonic55 on December 23, 2017 in Film Reviews, Reviews