Howdy ladies and gents, time for another review and today I’m talking about Alien: Covenant. Now I wasn’t the biggest fan of Prometheus (review available here), I’ve only seen that film twice I think and while really beautiful, the story and characters didn’t grab me at all. So when Covenant began its marketing I wasn’t overly keen, but the trailers did pique my interest. Now that I’ve seen the film I’m ready to pass judgment.

“The crew of a colony ship, bound for a remote planet, discover an uncharted paradise with a threat beyond their imagination, and must attempt a harrowing escape.”

The story did well to get back to the basics of what made Alien and Aliens so much fun by having a plot that was more familiar and straightforward, but in addition to that this film took certain plot elements from Prometheus (the previous film), and attempted to answer some of the lingering questions that film left up in the air. What I liked about this film was not only how it strengthened some of the plot elements from the last film but also made both feel naturally connected rather than forgetting what had come before. It was suitably dark and mysterious and brought up some interesting themes about the morals and ethics of creation, life and death and the need for humans to prolong their existence. It is unfortunate that not all of the answers from Prometheus were answered and there were certain plot details that Covenant brought up that weren’t properly clarified or felt left out in the main story. Plus this story doesn’t do much in the way of creating new material for this universe, sure there are some minor interesting additions to the mythology, however this is a story and set of scenarios you’ve seen before so if you were hoping something fresh you may be a little disappointed.

As for the cast there were fine, for the most part I liked this cast more than the Prometheus crew minus David, however, these characters were fine to forgettable as you can tell a good few of them are going to die at some point and sure enough they do. There are only a handful of people that stood out. Michael Fassbender once again was the best of the cast playing both as David and Walter, the android from the first film and the current android with the Covenant crew. Fassbender did well to portray these different characters both with different personalities and agendas, and I just loved watching him. Katherine Waterston was better than I expected as Daniels “Dany” Branson, since watching the trailers I thought the film was setting her up to be a Ripley-like character and while she does embody some of the those traits, Dany was a little more unique and she went from being someone a little dull to being quite captivating towards the end of the film. And Danny McBride was a surprise standout as Tennessee, I’ve never really like McBride, I’ve always found him annoying and repetitive in most of his comedic roles. But this role was very serious, aggressive and grounded and he was engaging in a way I never expected.

When it comes to the presentation it was pretty damn good. Just like Prometheus this film looks incredible, the art direction, cinematography, digital and practical effects was incredible. I also really liked the gruesome nature of the violence and action and the sound design really helped with that. As for the film score by Jed Kurzel it was pretty effective, channelling feelings of wonder, tension and discovery, while not always as effective as I would have liked, overall it was good.

In conclusion Alien: Covenant was not all bad and was actually better than I expected. While it didn’t do much to reinvent the wheel, it was a solid film much more in line with the first two Alien films with good violence, grim atmosphere and a great performance from Michael Fassbender. If you’re curious give it a watch. 🙂

So have you seen Alien: Covenant and if so what did you think of it? Did you like this film more or less than Prometheus? Whatever your thoughts are be sure to drop them in the comments below and I’ll see ya on the next review, laters! 😀

This Is The End Review

Okay peeps, time for me to review a film that I’ve been hesitantly interested in for some time. Today I’m talking about This Is The End, the comedy that loads of people have been going on about for weeks now. I saw the trailers and I thought the film looked good and then I saw them like 10+ times more and I kind of got sick of it. So then I wasn’t too interested in the film, but I decided to give in and watch the film yesterday and what follows is a film I wasn’t expecting. 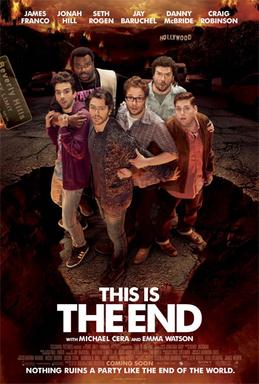 Story in This Is The End involves Jay Baruchel going over to meet Seth Rogen in Los Angeles, the two hang out for a bit until Rogen suggested that they head over to James Franco’s for a massive house party. While initially apprehensive about it, Baruchel agrees. The two go to Franco’s house and at this party there are celebrities left right and center who are drinking, doing drugs, singing and doing all sorts of other madness. It is during this party however that the world decides to bring on the apocalypse with the fire, earthquakes, cracks in the ground and so on. The initial event kills loads of people in the process, so then we are with Seth Rogen, Jay Baruchel, James Franco, Craig Robinson and Jonah Hill who have barricaded themselves inside Franco’s house. Eventually Danny McBride shows up too and these guys all have to try and survive together with crazy results happening along the way.

The story in the film is alright, but not what I expected it to be. You have your standard abundance of drug and sexual references, swearing, crude humour and ‘what the fuck?’ kind of stuff too, all of which you’ll either be a fan of or won’t be. Oh and did I mention that all the good parts in the trailers ruined the those supposed funny points in the film? Darn marketing. I though the story was good at the beginning, but once you actually saw the direction in which the film was going I started to lose interest and its comedic tone really started to drop. Now in most comedies there’s always some kind of emotional subplot going on that’s meant to meant to have a little heart and meaning behind it, and while that’s the case with this film I don’t really feel like it works due to not only the drama that goes on between the characters, but also because of the religious aspects too. I also felt like the story went on for far too long, there were moments in the middle of the film that dragged like hell and I felt like 10-15 minutes could have been trimmed off of the runtime. The one saving grace about this film for me is a kind of spoiler but I have to say it anyway… The Backstreet Boys! They’re one of my favourite nostalgic boy bands and they make the film, I won’t say how or when, but that was my favourite moment hands down.

When it comes to the cast, they’re really hit or miss for me. They’re all playing exaggerated versions of themselves which kind of works but then kind of doesn’t in some regards. So let’s start with Seth Rogen, he’s a person I actively hate just in general, but luckily he wasn’t as annoying as he was in his usual films. Jay Baruchel, I have to ask who is this guy? I was asking myself that for ages, but other than that I didn’t care for him because all he did was wine, bitch and moan. James Franco was my personal favourite, he acted like a douche, but that was okay because he was funny. Craig Robinson was a bit over-the-top with his humour but he was definitely one of the funnier people in the group. Jonah Hill was also funny and was just being the nicest person ever, though he has his moments of weirdness too. And as for Danny McBride, I really don’t like him in general and in this film I just hated him, he was such annoying man.

The rest of the cast is all just smaller roles or cameos. Emma Watson’s part in this film wasn’t nearly as funny or useful as I’d hoped. Michael Cera was humorous but didn’t make me laugh that much. Then there was Rihanna, dunno why she was in the film. The only other cameo that stood out was the appearance of Channing Tatum, so bloody unexpected haha.

As for the presentation, This Is The End is okay in both departments. The visual side of things has a decent use of practical effects and CGI though some of it is fairly crude and over-the-top. And the soundtrack by Henry Jackman is okay, but nothing memorable, the film fairs a lot better when there’s music taken from artists in the real world (example: the use of PSY and Backstreet Boys).

In conclusion This Is The End is okay, but the film is not nearly as funny as I thought it’d be. It’s just typical american humour that just doesn’t do anything for me. I’m sure most people who have seen or are going to see the film are gonna find it hilarious, but for me it wasn’t THAT good. I had more fun and laughter with Despicable Me 2 and The World’s End, in the end the film has its moments but it wasn’t my kind of humour yo.

Rating: 6/10 (I was gonna rate it lower but the Backstreet Boys saved it)

So what did you think of This Is The End? Was the film the hilarious masterpiece that you were expecting or was it overhyped? Whatever your thoughts are, drop them in the comments below and I’ll see you on the next review yo.