Good day to you ladies and gentlemen of the internet and welcome to a new music review, unlike the regular song or album reviews, this one will be on the live concert that Janelle Monáe did at Manchester Academy last night. Now I’ve been a big fan of Monáe since about 2010 when she first released “Tightrope” from her first album and since then I’ve tailed her and she’s grown to become one of my favourite musicians ever. Since hearing her latest album The Electric Lady which I loved, I knew I’d have to see her live and when it announced that she was gonna make three UK dates, I was all over it.

So after months of waiting was the concert worth the wait? Well read on and find out. 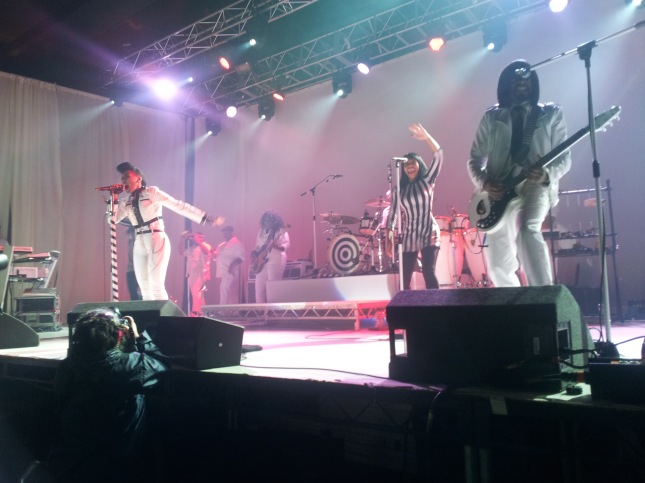 Prior to getting in and before seeing the live performances start, it was interesting to the different types of people that Ms. Monáe attracts. There were people of many ages and races and it was surprising, yet very delightful to see so many people coming to see her. My favourite person was this little girl, she looked no older than eleven or twelve, but she full-on fan and knew all the songs and considering the horrible stuff that kids listen to today this was a refreshing surprise that made me feel hope for the future. 🙂

Anyway, on to the performances. Before Monáe came on, we had a live show from Cody Chessnut. Now honestly I had no idea who he was or what to expect, but my goodness he was bloody impressive. Chessnut along with his band of very talented musicians gave us some really funky soul jams that got everybody bouncing because the songs were so cool, accessible and had a great liveliness to it. Chessnut himself was super charismatic, dancing all over the stage, shaking his hips and singing his heart out with style and flair. Overall it was unexpected, but very welcome surprise. 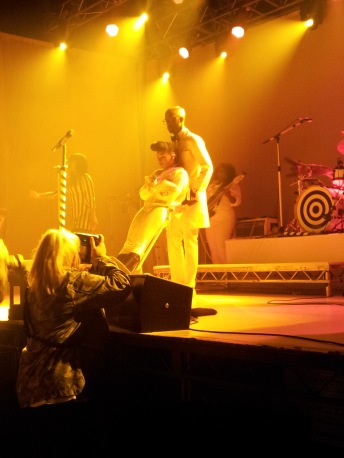 After Chessnut the crowd were anxiously waiting for Monáe to come on stage, but it took a while for the technical staff to move the previous band’s stuff off stage, set up for the next act and sort out the sound equipment. It was frustrating because the performance was meant to start at 9pm and didn’t really get going until 9:30pm, however it was worth the wait when the background music faded out, the lights went dim and the musicians took the stage. One of the men comes on as a character, gets everybody all fired up and introduces us to Ms. Monáe and then everyone went nuts. So then the band start playing “Suite IV Electric Overture” and everyone freaks out some more, but the real moment when everyone lost they’re minds is when Monáe, in a straitjacket get wheeled on to the stage. If one thing can be said for Monáe is that she loves her theatrics, just like her music videos and songs, they all have a theatrical, fictional and larger-than-life feel about them and Monáe applied it in her performance by having men in white suits watching them while they perform or carrying her off the stage or trying to relive her with an imaginary defibrillator among other things. I think the most random point came with the fluffed pillows, there were people in white suits passing these pillows into the crowd and then, next thing you know it was a mental pillow fight with feathers flying everywhere, on the stage, in the crowd, it was every and it was insane and totally out of nowhere. Now we’d already been surprised by fancy confetti flying everywhere before, but this pillow fight was on a whole new level of interactivity, fun and madness. It was crazy, but incredibly fun and inventive. 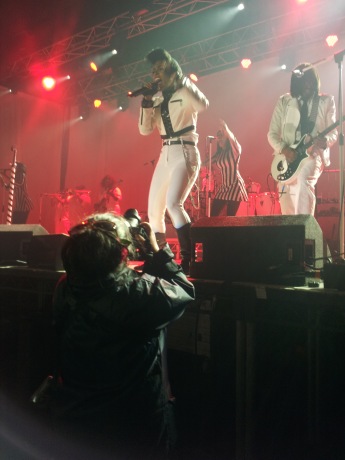 Also it has to be noted that Janelle Monáe had full control of the crowd, she interacted with them by getting them to see along with her, constantly switching from one side of the stage to the other, even getting the whole crowded audience to lower themselves as she climbed over the barriers and cruised through the audience or when she crowd surfed later on. Everybody loved her and she was clearly loving every second of it. On top of that her dance moves were totally fly, so cool and stylish, the woman is constantly full of energy and I dunno where she gets it from, but it makes her incredibly fun to watch. She is charismatic and a bit crazy, but that’s what makes her so fun to watch, she’s so unique there’s no one else like her. If I had to give comparison of who she reminds me of, I’d say she’d be a cross between James Brown, Elvis Presley and Michael Jackson, all of them had great stage presence, style and dance moves and Janelle has it too (she did the moonwalk several times which was kick ass too!). 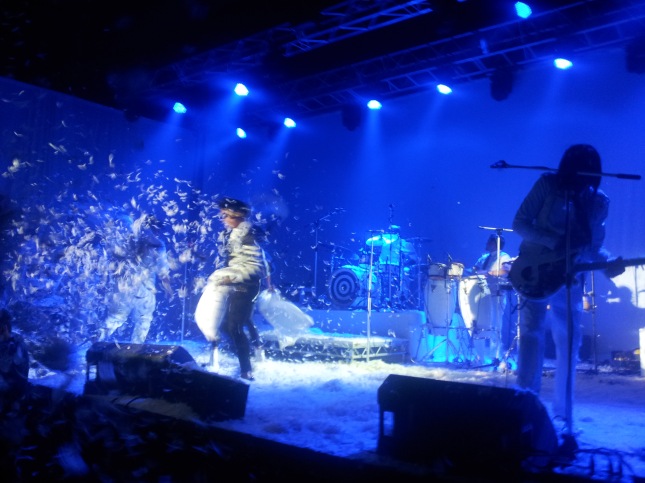 Okay let’s get back to the music and what a selection we got given. While the majority of songs were from her latest album, we were also treated to some songs from The ArchAndroid and Metropolis. From the latest album we were treated to “Giving Em What They Love”, “Dance Apocalyptic”, “Q.U.E.E.N.”, “PrimeTime”, “Electric Lady” and “What An Experience”, from the first album we were treated to “Cold War”, “Tightrope” and “Come Alive (War Of The Roses)”, and finally from her EP we got “Sincerely. Jane“. The other two songs were covers, firstly with the Jackson 5’s “I Want You Back” and then with Prince’s “Let’s Go Crazy“. To keep it short all of the performances were incredible, just incredible. Monáe was on-point with an incredible vocals and her band were insanely talented, all of them got their chance to shine especially Monáe’s guitarist Kellindo Parker, that guy is absurdly talented and really was one of the highlights of the entire concert. But if I had to go into more detail on the songs I would say that “Giving Em What They Love” really got things going especially for me as it is one of my favourite songs from the latest album, “Sincerely. Jane” was a song I hoped would make the set list and to hear it made me SO happy beyond words, “Electric Lady” was gorgeous and “Cold War” and”Tightrope” went down incredibly well with the crowd and especially with me because they’re the oldest songs I know by her and it was performed masterfully. And finishing on “What An Experience” was just a perfect way to end things. 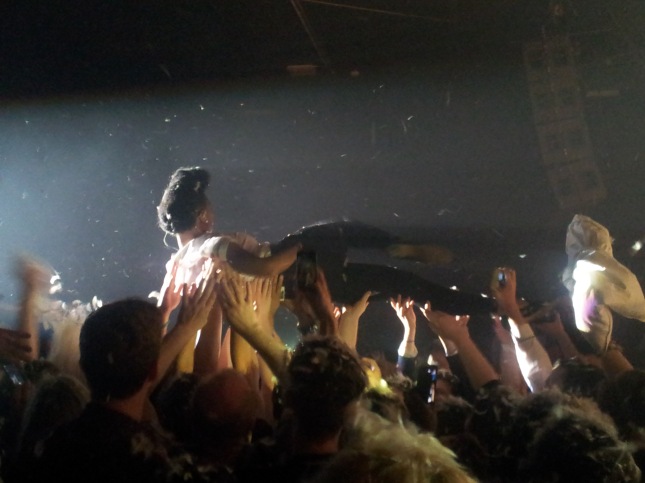 In the end Janelle Monáe’s live performance at Manchester Academy was amazing and unforgettable. Beyond the great dancing, music and singing, there was a great level of fun and excitement that came from the concert that I haven’t experienced before. It was fun and if you ever do get the chance to see Janelle Monáe live at some point be sure to do so, she’s got talent that needs to be seen live. 🙂