Howdy ladies and gents and welcome to another film review, today I will be reviewing Chef, a film that was released in the summer that I really wanted to see, but due to limited film screenings I missed it. However, thanks to Cineworld’s “Take 2 Thursdays” I got the chance to check it out and now I will pass judgement in this small review.

The film can be summed up in the following premise:

“A chef who loses his restaurant job starts up a food truck in an effort to reclaim his creative promise, while piecing back together his estranged family.”

I thought the story for the most part was pretty good, it did take a while for the film to find its feet and there were some tonal problems here and there, but for the most part this was an interesting film that deals with the pressures of life, pride, reconnecting with your past and doing what you love. The film’s main story surrounding Carl was pretty interesting and emotional at times, but I felt like it worked best when his son and co-workers were involved. The dramatic elements were the best parts of the film as I they felt genuine and were better executed than the humour which I felt wasn’t as snappy or witty as some other comedies I have seen this year.

When it comes to the cast they are all very good. Jon Favreau as Carl Casper was very nice, I haven’t Favreau in many films, however, this is probably the best performance I have seen from him. Carl is a man who has been through a lot, he loves food and is very passionate, but has a hard time doing things his own way and finding a way to connect with his son. The man goes on a journey which is very emotional and Favreau brings his A-game. Emjay Anthony as Percy was really good as Carl and Inez’s son. Percy’s a boy who wants to be part of his father’s life, however, because the nature of his parents’ relationship and his father’s work, he does feel lonely. Anthony was pretty good in this role and I believed in his struggles and emotions when it came to his father and his cooking. John Leguizamo was awesome as Martin. This man is Carl’s friend and partner, they both share the same love for food and he has Carl’s back when they go off on their food adventure. Leguizamo is a man who I’ve really started to like over the last year and that continues in this film as he is very charismatic and funny.

Sofia Vergara as Inez was good, she was beautiful and funny, Scarlett Johansson was gorgeous as Molly, another friend of Carl, who always supports him and wants him to strive for more. Bobby Cannavale was hilarious as Tony, he had a lot of good scenes and it was great/strange to see Cannavale in this role after his appearance in Boardwalk Empire. Dustin Hoffman is great as Riva, while Robert Downey, Jr. as Marvin, could have been played by anyone, that being said RDJ’s contribution to the film was greatly appreciated because of his charm and finally Oliver Platt as Ramsey Michel is very good as the online food critic. 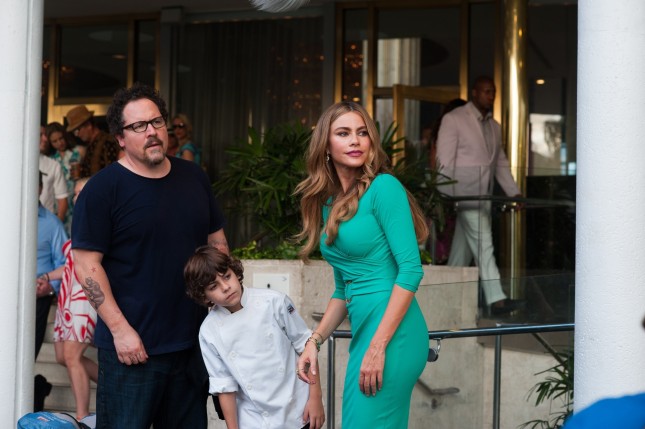 In conclusion Chef is a feel-good film with a good if somewhat familiar story with fun performances, beautiful food and a lovely soundtrack. It isn’t perfect and the humour’s a bit off, but overall it works.

So have you seen Chef, and if so what did you think of it? Leave your comments below and I’ll see ya on the next review, laters!