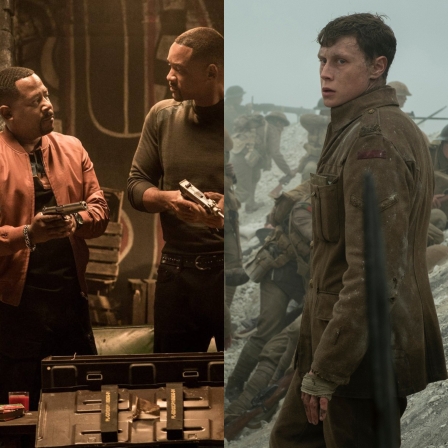 Howdy ladies and gentlemen of the internet, yeah I’m still alive haha. Today I am here to share my thoughts on both Bad Boys For Life and 1917 via my podcast Film Focus.

On episode 97 of Film Focus, I’ve got a double film review for Bad Boys For Life and 1917. Now I was initially going to do separate reviews for both but decided to put them together in the same episode as it’d be an interesting balance between something fun and something serious. Both films left me with thought I just had to share, so how did these films fare? Well, listen to this episode for some spoiler-free thoughts on both films! 😀

So have you seen Bad Boys For Life and 1917 and if so what did you think of it? Drop your thoughts in the comments section below and I’ll see ya in the next review, laters! 😀

Posted by Hypersonic55 on January 30, 2020 in Film Reviews, Reviews

Good day to you ladies and gentlemen, it’s a new year so once again its time for my preview of this year’s films that I believe are worth viewing entitled: Films to look out for in 2020! In PART 1 I’ll be covering films released from now until April, and while these aren’t necessarily the best films that’ll be coming out during this period, I do believe there’s merit to all of the films on this list.

Now before we begin I have one thing I need to specify:

I’ve never been the biggest fan of the Bad Boys films, but I’ve definitely enjoyed them more than most of Micahel Bay’s filmography. And for what they are, just fun action films with moments fo humour, there’s fun to be found in them (though I really like the first as opposed to the sequel). I’m interested in this film for a couple reasons: 1) This film has been talked about for YEARS and for it to finally be happening feels so surreal. And 2) I want to see what a Bay Boys film looks like in the modern era of Michael Bay post Transformers, Pain and Gain and so on. Will it have the better elements of his filmmaking or the worse stuff? Here’s hoping for the former.

I only found this film was in existence recently. I think this looks like a pretty compelling film with a story that gets more complicated as it progresses. I enjoy films that involve cover-ups and deception on a large scale and an individual who has to uncover the truth against tough odds. Plus I love that Sebastian Stan is the leading role alongside other actors I like including Christopher Plummer, William Hurt, Ed Harris and Samuel L. Jackson.

Oh my gosh, this was one of the films I put on my list this time last year! Then I remembered seeing the trailer for this in the cinema a good few months ago and was like, “Oh, is that Blake Lively? Interesting.” While this kind of thriller has been before, the premise seems intriguing enough that if handled well it good be a good time. I’ve never big into Lively but this looks like it could be a good/different role for her, plus I like Jude Law and Sterling K. Brown.

Look, I know this film probably won’t be very but damn it I have to know how bad it’ll be. After all media buzz surrounding the film with its first trailer and Sonic’s initial design which was atrocious to the redesign and second trailer which people liked a lot more, I just need to see what kind of madness these filmmakers have crafted. I mean I hope that it’ll be good, that’s all I can hope for (says every Sonic fan about any new material especially when it comes to the video games).

I never saw the TV show, though I am aware of its existence and some of the parodies that have come over the years, but I am always down for a new reboot if it looks good enough, and this film looks like it could be fun. Now granted it has a lot of the tropes of modern horror films which I do make me want to roll my eyes, but the premise of going to an island, having fun and fulfilling your desires with a dark twist seems like it could be fun. Here’s hoping it is at least entertaining.

Well, this certainly looks interesting. At first, I thought I was watching some sort of variation on Lord of the Flies, but as the trailer continues I’m like “Is this like a different take on The Lost Boys from Peter Pan?” Now I’m intrigued. I’ve never been the biggest fan of Peter Pan in many of the adaptations that exist besides Hook, but there are several aspects of the world and characters that’s always stuck with me and this new twist on that world might be what I’ve been looking for.

This has one of the most emotionally effective trailers I’ve seen for a while and that’s due to not only the brilliant choice of song, but also because of Ben Affleck’s character and how much it relates to what was happening recently in real life. Seeing Affleck playing an alcoholic trying to make his life better but struggling with his demons, fuck man it just hit me in a certain way. And sure we’ve seen films like these before and probably know how it’ll play out, but I like Affleck as an actor plus Gavin O’Connor did a great job with Warrior and The Accountant so I believe this film will be another win.

I think this film has the potential to be fun, the premise is pretty unique and it looks like it could be a good role for Vin Desiel to play around with. The action and visual effects looks solid, I just hope it’s not too predictable and generic with the story material.

A Quiet Place was one of my favourite films of 2018 because of the unique story, great acting, sparse dialogue and the brilliant utilisation of sound and the lack of it. So when I heard there was a sequel, while I didn’t think it’d be necessary, I was also down for it regardless. And after seeing that new trailer I’m in. This definitely looks more expansive than the last film with more action, but I hope the tension and scares remain intact and I can’t wait to see what Cillian Murphy brings to the sequel.

Feels crazy that this film is actually coming out after so much talk online from various parties talking about whether the film would be released or shelved or changed because of some background details going on with the Disney acquisition of Fox. But it was just announced recently that the film will come out in April and the newest trailer definitely looks like fun with these characters who all have different abilities and troubled histories. And I hope the story, horror and suspense are solid.

No Time To Die

Now I’m not gonna lie I haven’t been too hyped for this upcoming Bond film. Spectre left a bad taste in my mouth and I wasn’t sure that, despite the assembling of a solid cast and the great director in the form of Cary Fukunaga, that they would be able to entice me to watch another adventure. But this new film does look like fun, I’m feeling the mystery and intrigue and some of the action sequences look pretty cool. Plus I want t see what Rami Malek brings to this film because I like that guy.

I didn’t know this film even existed until today and I have to say it’s piqued my interest very much. I’m not big into horror, but I do like creepy stuff with a supernatural twist. Plus I like Kerri Russell and Jesse Plemons and the fact that 1) Guillermo del Toro is producing is cool. But more importantly 2) Scott Cooper is directing, a name I didn’t recognise, but when I looked up his filmography I’ve enjoyed almost all of his films besides Hostiles which I haven’t seen ey. So I’m curious to see how he’ll handle his first horror film.

I didn’t know this film existed until today and now that I’ve seen the trailer I’m actually stupidly excited to see it. The concept seems so intriguing and scary to me. You have Carey Mulligan running around as a crafty lady on a mission to fuck some dudes up in a strategic and possibly/probably painful manner. Good god, I’m so interested not only because it looks like it’ll touch upon current issues surrounding sexual misconduct between men and women that’s become more notable in recent years, but also because o the different kind of character Mulligan is playing. And finally, I can’t deny how much I love that sexy version of Brintey Spears’ “Toxic“, man it just intensifies the unsettling nature of this film. I’m all in.

And here we have another film I didn’t know about until day and you know what I’m all in again. You had me when you said Janelle Monáe was gonna be in it. But beyond that, it looks creepy, unsettling and confusing and I love it. Such a short trailer with a serious of clips arranged in such a way that you can’t help but be intrigued and want to know what’s going on. Someone in the Youtube comments section described it as a black person’s nightmare and yeah I can definitely get those vibes from the trailer. I hope that it’s good.