Rant 15: Ash Ketchum, A Failure of a Pokemon Trainer.

Howdy people and welcome to another instalment in my blogging rants. Today’s rant will be on something that I’ve wanted to talk about for quite some time over the last six months or so, and it concerns one of the biggest failures in the history of cartoons and video games… I am of course talking about Ash Ketchum, the Pokemon trainer.

Just look at this fool, he makes me angry just looking at him. 😡

So you may be wondering, why do I have such a massive beef with this little guy? Well I would like you to cast your mind back to the late 1990’s where fads were coming in left, right and center and Pokemon was the biggest thing in the history of the world. Besides the massive popularity and success of the video games and the trading cards, there was a little TV show that was probably just as big, if not bigger than the video games. This anime series focused on Ash Ketchum (pictured above), a ten-year old kid on a quest to become a Pokemon master. With his main Pokemon, Pikachu and his two friends Brock and Misty, Ash travelled all of the region of Kanto capturing Pokemon, defeating average trainers, taking on gym leaders for badges, beating up three idiotic members of Team Rocket on a regular basis. The show was made for kids and at the time it was pretty badass, to see all of the Pokemon in an animated form with voices, doing all their crazy moves and seeing Ash go on these crazy journeys it was fun, thrilling and exciting stuff. And some of us gamers had some things to say about the way in which the anime changed some of the basic elements of Pokemon Red and Blue, for the most part we liked it.

But by the time we got to Pokemon: The Johto Journeys (the third season of the anime), I started to notice the cracks in the foundation that made Ash Ketchum a likeable character. I mean he’d made some pretty foolish decisions before but I forgave him because I knew that the adventure wasn’t over and I assumed he would improve, however it was at this point I was like, “Dude what are you actually doing? Are you some kind of fool?” And unfortunately as time went on my respect for this boy declined more and more. By the time Pokemon: Advanced came around I was pretty much hanging on by a thread, the guy had come so far and yet still didn’t seem like he learnt anything plus he’d gotten rid of all his cool Pokemon for some really boring ones from the Ruby and Sapphire series. And when I had a look at the Black and White and saw that Ash was still chasing the same dream but was by no means any better of trainer than anything I had done in several of the games I had played, I knew that he was pretty much a failure.

Let’s just look at facts. Ash Ketchum wants to be come a be the ultimate Pokemon trainer and succeed at everything, but he’s so many things wrong like:

Ash Ketchum started his adventure in 1997 and 18 series later he’s still trying to do what all of us in the video game world have done several times over across 6 generations of portable video games.

Now those of us that have played the Pokemon games we have captured, battled and trained our Pokemon and completed everything and yet this prick, Ash Ketchum can’t even advance past the first Pokemon League in the first season. Weak. But what makes it even worse is that the game equivalent of Ash known as Red from Gold and Silver who you find in Mt. Silver is a beast! He pretty much has most of Ash’s Pokemon in their max evolutions (besides Pikachu) and their all in the 80’s, he’s a dangerous man if you’re not prepared… He is more of a man and a trainer then that Ash Ketchum will ever be.

Bloody hell just talking about Ash pisses me off. Over the years he has just gotten worse and worse.. I have re-watched some of his older adventures and it is his whole attitude, the way he battles, the type of Pokemon he’s collected, his lack of progression, everything about this boy screams of failure! And what makes him even more of a failure is that after watching Red’s performance in Pokemon: Origins he accomplished in a 4-part OVA what Ash has been doing for how many seasons of the main anime show. He sucks. Period.

So if you think that Ash is such a hero, just look at the following images: 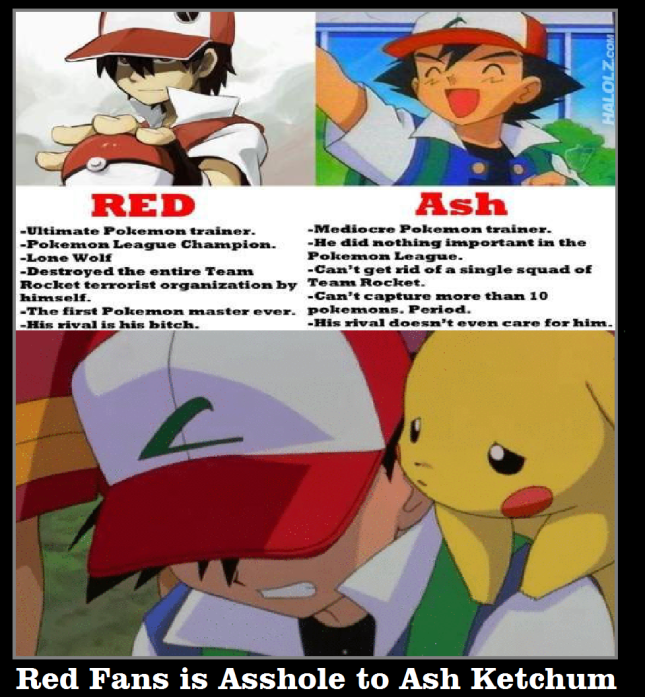 Well that’s it really. I hope this has been an insightful rant and if you’ve had any similar experiences please be sure to comment about it in comments below. Until the next time people, laters. 🙂