Howdy ladies and gents, time for another new film review and its time to talk about Anchorman: The Legend Continues. I really liked the first film, it was weird, but creative, unexpected and funny. When I heard they were making a sequel I shook my head in disbelief, but then the trailers started to win me over. So I just watched the film a few hours ago and now I’m gonna tell ya what I thought of it. “With the 70’s behind him, San Diego’s top rated newsman, Ron Burgundy, returns to the news desk. Also back for more are Ron’s co-anchor and wife, Veronica Corningstone, weather man Brick Tamland, man on the street Brian Fantana and sports guy Champ Kind – All of whom won’t make it easy to stay classy… while taking the nation’s first 24-hour news channel by storm.”

The story in this film is pretty decent, its funny how the film looks at the concept of news and the way it changes and develops, which obviously is normal for us now, but back then stuff like 24-news and news on random subject matters was unheard of. Also the journey that Ron goes on in this film is also pretty interesting and funny, however the story does lose some steam towards the last third of the film where something quite absurd happens which kind of ruins the whole film, its eventually rectified but is still kind of silly. Also one has to ask; was the film funny? Well as a guy who really isn’t into comedy that much I found the film to pretty hilarious and while it wasn’t consistently laugh-out-loud material, there were a few points when I laughed a lot.

When it comes to the cast, several of the actors from the original return to their characters while we’re introduced to some new ones too. Will Ferrell is still on point as Ron Burgundy, he is so charismatic, stupid and strange but he’s the guy you like because he has a personality and certain charm that you can’t help but love. Ferrell was good for the most part though there were points where I thought he was a bit over-the-top at times. The other main person to talk about is Steve Carell as Brick Tamland, he was practically the only person I’d hear people talk about in the last film and that probably won’t change with this film as Carell is just as crazy as before offering up some great moments of insane, inappropriate and downright weird behaviour.

Paul Rudd as Brian Fantana is still cool with all of his sexual references and awesome hairdo and David Koechner is just totally great as Champ Kind offering some really funny lines in the film. Christina Applegate as Veronica Corningstone was alright, she was my least liked character in the last film and that sort of continues in this one I dunno what it is that makes me not engage with her character but yeah she was just there to me. James Marsden as Jack Lime was awesome, I liked his over-confident attitude and really cruel personality, he was a good antagonist and Marsden such a good job. And then there’s Meagan Good as Linda Jackson, she was terrific as this intense, scary, confident and intellgent woman who has a way of doing things and has little time for people not playing in the same ballpark as herself. I think this has to be Good’s biggest role in years, I’ve been following her since around 2001 and she did really well and my god, she is still sexy as hell! 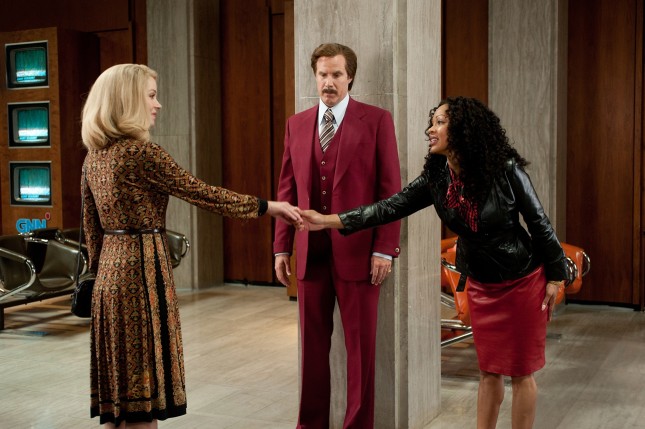 There were also good performances from Fred Willard as Edward “Ed” Harken, Chris Parnell as Garth Holliday and some funny moments with Kristen Wiig as Chani. Oh and by the way Harrison Ford as Mack Tannen was pretty pointless, his role could have been played by anyone. And then there are the cameos, holy crap like the first film there are some incredible cameos and I swear so many of these come right out of nowhere, some of my all-time favourite people ended up there. I don’t wanna ruin the surprise for those who haven’t seen it, but suffice to say that its badass.

In conclusion Anchorman: The Legend Continues is a pretty good sequel to the original, it has everything you liked about the first film with some new stuff thrown in the mix to make it stand out. While it does have some story issues and lacks some of the charm from its predecessor, this film is definitely recommended for fans of the last one.

Rating: 7/10 (A solid sequel with plenty of laughs but it loses its way during the last third of the film)

So have you seen Anchorman: The Legend Continues and if so what are your thoughts on it? Whatever your opinion is drop it in the comments below and I’ll see ya on the next review yo! 😀