Howdy ladies and gents, time for another new film review and today I’m talking about the latest X-Men film in the form of X-Men: Apocalypse. Now I’ve gone on record stating that I wasn’t wowed by the trailers for this film, but have been cautiously optimistic about it and after seeing it last night I’m ready to pass judgement!

“In this latest X-Men chapter, the ancient being who is said to be the first mutant known as Apocalypse rises after years of slumber of cleanse the Earth of the humans and create a new world for mutants. So it is up to the X-Men to stop Apocalypse from completing his nefarious plan”

The story of X-Men: Apocalypse is one of intrigue, surprise and familiarity. The tone is dark and grim with some very dramatic and emotional stuff, however there is also a good deal of humour and light-heartedness to slightly balance things out. What we have is another world-ending adventure, but it was the small character moments in between and the build up which was the most engaging material for me. What this film did well was to introduce Apocalypse and his history in the world, and introduced us to new and returning X-Men characters in a great way (with some having better appearances than others). Also for long-time X-Men film viewers there’s some awesome throwbacks to previous X-Men films which were so delightfully sprinkled throughout. The issues I had with the story was that it felt a little larger than life when compared to the previous X-Men films which were a little more grounded, certain plot points don’t completely pay off, and even though the X-Men timeline is messed up already, this film doesn’t help make things better either. And with director Bryan Singer at the helm I really love it because he helped craft this film world and has a certain style with his direction which makes me smile, but at the same time some of the issues I have with the way he handles these films haven’t been rectified yet, and makes me wish someone else mix things up (like Matthew Vaughn did with First Class). 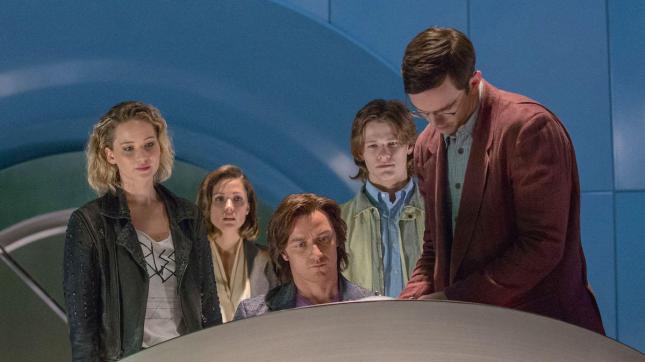 As for cast it is a pretty large ensemble and for the most part everyone was great in their roles, though some were definitely short-changed. Firstly James McAvoy and Michael Fassbender kill it once again as Professor X and Magneto. Since First Class both of these characters have had very important and captivating story arcs and that continued into this film. I really enjoyed seeing more of an older Professor X with him teaching and still trying to co-exist with humans, but what was much more interesting was Magneto’s arc as he continued to be one of the most tragic and complex characters in the film series with all the drama and conflict he faced. As for Jennifer Lawrence as Raven/Mystique she was fine, the arc that they gave her in this film felt logical and made me understand her motivations, even though several times she felt a little schizophrenic at times. Also Oscar Isaac as Apocalypse was good but also a little underwhelming, I liked the character motivations and what he represented at first, however he was hard to engage/relate to because he felt so alien/robotic. Evan Peters as Quicksilver was certainly a more fully formed character than before with more development and screen time, and luckily he’s just as delightful as he was in his previous adventure except much better in this latest appearance. Oh and Wolverine’s appearance (it’s not a spoiler since he was technically shown in the last trailer), loved it, was a great sequence.

Nicholas Hoult was good as Beast and the return of Rose Byrne as Moira MacTaggert was welcomed too, and Josh Helman was good and had definitely gotten more settled in his role as William Stryker. And then there’s the new versions of the old characters. Of all of them Sophie Turner fared the best as Jean Grey, he character felt fresh and yet familiar, and Turner brought a lovely energy and presence to the character which felt similar to both the comics and films. Tye Sheridan as Scott Summers/Cyclops was also very good and had a lot more of a presence and charisma than what we’ve seen in the past, and I really liked Jean and Scott’s interaction, felt like they had a good introduction and nice chemistry. Kodi Smit-McPhee did great as Nightcrawler, he was able to capture the spirit of what Alan Cummings brought to the role in X2, but added a whole new level of youthful charisma and humour to the role. And Alexandra Shipp as Storm was decent, but the least interesting of the new X-Men as she felt a bit plain and lacking flair.

And then there were was everyone else. Olivia Munn as Psylocke, well, she was alright I guess. I mean maybe I was expecting too much, but I didn’t get to know much about her and she didn’t do much beyond what was seen in the trailers, that being said Munn handled her action scenes well. Ben Hardy as Angel/Archangel was fine, but he felt very plain and undeveloped, while Lana Condor was good as Jubilee but for all the hype that was made about her being in the film her part was incredibly minor. And Lucas Till returned as Alex Summers/Havok had some really good scenes but was in the film much less than I liked.

When it comes to the presentation it was pretty good. Visually the CGI was good with some good attention to detail with the special powers and crazy large-scale action sequences (shout out to the Quicksilver sequence), but I will admit that some of the fight scenes weren’t that exciting and it didn’t help that several of the action scenes were shown in the trailers. And the film score by John Ottman was great and maybe his best work in the X-Men film series so far, this music was diverse, intense, dramatic and was always relevant with what was happening on-screen.

In conclusion X-Men: Apocalypse is another solid film in the X-Men film series, it was not only better than what I’d expected considering that trailers didn’t wow me, but it also featured some of my favourite moments in any X-Men film so far. However there were a few story and character motivation issues that just prevented this film from being greater.

So have you seen or are you going to watch X-Men: Apocalypse? Whatever your thoughts are be sure to drop them in the comments below and I’ll see ya on the next review, laters! 😀

Howdy ladies and gents, so some big casting news for X-Men: Apocalypse broke yesterday (early this morning for us UK people) and I feel like I need to talk about it. The following information comes from ComicBookMovie:

For the past few months, several names have been thrown in the mix for the roles of Ororo Munroe aka Storm, Jean Grey, and Scott Summers aka Cyclops, as the younger iterations of the mutants will be appearing in Bryan Singer’s X-Men: Apocalypse. While those shortlists have shortened this past month, the director has just taken to his Twitter account to announce that actors Alexandra Shipp (Storm), Sophie Turner (Jean), and Tye Sheridan (Cyclops) have officially joined the ensemble cast. Shipp is probably best known for portraying the late songstress Aaliyah in a Lifetime biopic, while English actress Sophie Turner is known for her role on HBO’s Game of Thrones, and the relatively unknown Tye Sheridan has been praised for his role in 2012’s Mud. Anyhow, the trio join a mutant roster made up of Jennifer Lawrence, Michael Fassbender, James McAvoy, Nicholas Hoult, and Oscar Isaac, while X-Men: Apocalypse is set for release on May 27, 2016.

So what do I think of this news? I’m totally down with it, I like these choices a lot. Like with X-Men: First Class, the cast are young and mainly unknown, though there are exceptions to the rule here. Firstly let me talk about the person I’m most excited about and that’s Sophie Turner as Jean Grey. Turner is great as Sansa Stark in Game of Thrones and for her to land a role like this, I’m so happy for her and it’ll definitely get her some more publicity. The girl can act and I wonder how she’ll transition into the more action-based material. Then there’s Tye Sheridan as Cyclops, while I’ve only seen him in Mud, I thought he was very good and I hear a lot of good things about him The Tree of Life and Joe. I hope he’ll brink a bit more attitude and badassery to the character that’s been lacking so far. The only person who I don’t know about is Alexandra Shipp who will be playing Storm. I’ve not seen her in any of the films or TV shows she’s been in. All I know is that she played Aaliyah in Aaliyah: The Princess of R&B last year, but other than that she’s pretty much unknown to me. I can say that she’s pretty though. All I really want from these younger versions of Storm, Jean Grey and Cyclops is more screen time, better action sequences and character traits more in line with the comic books.

So what do you think of this casting? Whatever your thoughts are be sure to drop them below.