Howdy ladies and gents, time for a more recent film review and today I’m going to be talking about San Andreas. Now when I heard about this film and saw the trailers, I wasn’t sure if I’d want to see it or not. I mean it was just another disaster film right? And I’ve seen plenty of those, would the addition of Dwayne Johnson sway me? Probably not. But since my dad wanted to see it the other night we gave it a shot and now I’m ready to pass judgement. 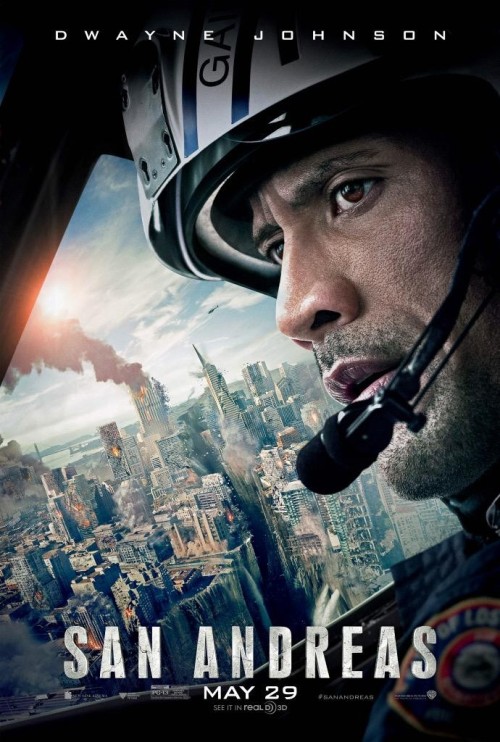 The plot can be summed as the following:

“In the aftermath of a massive earthquake in California, a rescue-chopper pilot makes a dangerous journey across the state in order to rescue his daughter.”

The story in this film is familiar and yet serviceable. I got a lot of The Day After Tomorrow vibes from this film as there are very similar story elements and if we’re talking just in general, then I was also reminded of 2012 too. But those previous films aside, this film is about a rescue mission in addition to the seismic activity, earthquakes and people caught in middle of these crazy situations. as usual there’s an emotional aspect added to the main character and the people surrounding him, it’s not bad but it’s not great. I think the one thing that bugged me was the forced romance that I saw a mile off as soon as said characters laid eyes on each other. There is also a fair amount of humour too, some of it works and some it really feels forced.

Now let’s talk about the cast. Dwayne Johnson was awesome as Chief Raymond “Ray” Gaines, the film mainly works because of him. Johnson has this natural charm, charisma and a muscular body that helps draw us fans in, but beyond that the man is becoming a better actor and with each serious role he shows his talent more and more and I bought his character, his troubles, his occupation, he sold it well and it helps that he’s just magnetic presence on-screen. Carla Gugino was good as Emma Gaines, Emma has history with Ray and while its nothing we haven’t seen before Gugino handles her material well enough. Alexandra Daddario as Blake Gaines was fine too, I’m not going to lie I was distracted by Daddario’s beauty in this film, but otherwise she was charming and fine in her role. Also Paul Giamatti was good as Dr. Lawrence Hayes, I liked his character, he seemed very smart and looked like he wanted to use his knowledge to save the lives of many people in danger.

Ioan Gruffudd was pretty good as Daniel Riddick, this was the first major film I’ve seen him in for a while and he was fine in the film, though his character was a douche though. Hugo Johnstone-Burt as Ben Taylor was alright, but his character felt quite annoying and dull at times. Art Parkinson, who played his brother Ollie Taylor fared a little better, this guy had some comic relief moments and some worked well and others not so much. Archie Panjabi was good as Serena Johnson. I was surprised to see Kylie Minogue as Susan Riddick, but she was fine too, but my biggest surprise was seeing Colton Haynes as Joby. I kept looking at his face but I couldn’t pinpoint where I’d seen him before until I got some and realised it was Roy from Arrow, the frigging blonde hair threw me off! 😛 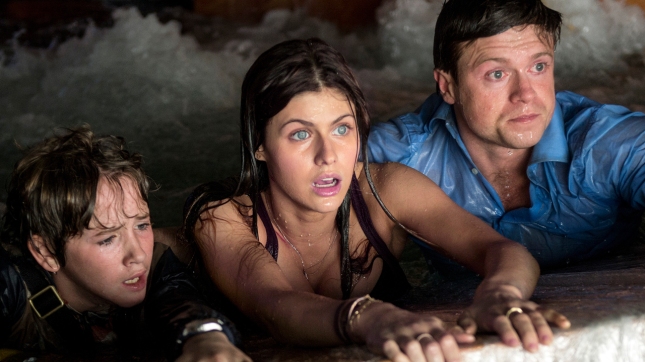 When it comes to the presentation, its pretty damn good. Visually the film boasts some kick ass action sequences thanks to some well-crafted CGI to demonstrate on this destruction and chaos whether it is buildings falling, a rock slide, earthquakes or a tsunami, it looks very cool. I would say however that some of the special effects look a little blurry and not as polished as some other scenes. Also the soundtrack by Andrew Lockington is quite nice with a good sense of energy and power.

In conclusion San Andreas is pretty good disaster film. While it does have all of the standard codes and conventions of this genre of film and it does get a bit dull during some of the talking moments, the film mainly succeeds thanks to the central performance of Dwayne Johnson and some pretty cool action sequences. I was surprised by how much fun I had with this one and I would recommend it to all that are interested.

So have you seen San Andreas and if so what do you think of it? Please be sure to leave your thoughts on in the comments below and I’ll see ya on the next review, laters! 😀

The Actresses & Actors Up for Marvel’s Jessica Jones & Luke Cage

Howdy ladies and gents, time for some film news and once again it is Marvel-related. So with Daredevil well in the works now, it seems like Marvel Studios are finally moving ahead with the next set of Netflix characters with actors and actresses potentially up for the roles of Luke Cage and Jessica Jones. The following information comes from superherohype:

The outlet also reports that two names have emerged as the front runners for the Luke Cage role: Lance Gross (“Crisis”) and Halo: Nightfall‘s Mike Colter. Cage will reportedly appear in seven of the 13 episodes in the “Jessica Jones” series before going on to appear in his own 13-episode series.

“Dexter” and Twilight scribe Melissa Rosenberg is set to executive produce the “Jessica Jones” series, which focuses on retired superhero Jessica Jones hanging up her tights and opening her own detective agency. Rosenberg is no stranger to female superhero shows either, having worked on the short-lived “Birds of Prey” series on The WB.

“Jessica Jones” is the second of five Netflix shows Marvel will roll out starting next year with “Marvel’s Daredevil.” Following the two will be both “Luke Cage” and “Iron Fist,” with all four leading into a “Defenders” mini-series.

UPDATE:Deadline has learned that Marin Ireland (“The Divide”) and Cleo Anthony (“Transparent”) are also up for the roles of Jessica Jones and Luke Cage, respectively.

So what do I think of these choices? Very interesting. I’m not fully familar with all of these people and their work but I am curious about the what each other could potentially bring to the table.

So let’s start with the actresses up for Jessica Jones. Krysten Ritter is someone I liked in Breaking Bad, however I haven’t seen any of her other work to be able to judge whether she would be a good fit for the character. Ritter has been in a good few films and TV shows so I guess she most be good for her to be considered for the role. As for Alexandra Daddario, she’s a lady I’ve heard much about but have never seen her in anything, besides a small role in The Squid and the Whale (but I barely remember that film). She’s apparently worth watching in True Detective but until I see more from her, I can’t pass judgement. Teresa Palmer was good in Warm Bodies) she’s been in a good few films, whether she would be a good fit for this character remains to be seen. Jessica De Gouw, yes. I loved this woman in Arrow, she was both gorgeous and deadly as Helena Bertinelli/The Huntress and definitely had the acting chops to back up the action side of things. And finally there’s Marin Ireland, who was in Side Effects, but I don’t recall her in that film and the rest of her filmography is completely alien to me, however the amount of awards and experience she’s had in film, TV and theatre is pretty impressive.

And then there’s the actors who don’t have a filmography nearly as impressive as the women. Firstly there’s Lance Gross who’s just been in Tyler Perry films, that just doesn’t bode well for me at all. Mike Colter is a little better with a more expansive filmography in film and TV, but nothing that’s really too notable for me besides his appearance in Men in Black 3 which I recalled from 2012. And finally there’s Cleo Anthony, this man has been in a few big things here and there but nothing too notable.

In the end these are some interesting choices. If I had to pick out of the actresses then I would pick either De Gouw because of her work in Arrow or Palmer because she’s pretty or possibly Ireland because of her wide experience. As for the men I would go with Mike Colter, he seems like he has the most acting experience, simple as.

So what do you think of these choices? Are they up your ally or do you think that they’re miscast? Whatever your thoughts are be sure to leave them in the comments below.