Howdy ladies and gents, time for another one paragraph review and today I’ll be talking about Tower Heist. Now I’ve been meaning to watch this film for a while because I missed in this the cinema due to its mixed reception, but over the years I’ve heard it wasn’t too bad so I decided to check it out and see what it was like.

The plot can be summed up as the following: “The plot follows a group of employees of an exclusive apartment building who lose their pensions in the Ponzi scheme of a Wall Street businessman. So the group enlist the aid of criminal, a businessman and another employee of the apartment building, to break into the businessman’s apartment and steal back their money while avoiding the FBI agent in charge of his case.” I thought Tower Heist was a fun little film, I’ve always enjoyed a heist film and the fact that it was mixed with comedy was an added bonus. I liked the story, it was humourous but a enough heart so you cared about most of the key characters and their motivations. The pacing was swift, the action set pieces were good and while the humour wasn’t the funniest material, there were a good few moments that made me laugh. The plot wasn’t what I expected and while it hit some familiar beats that I’ve seen in films like this before, there was enough unique and unexpected aspects that made it worth a watch. The cast was all really solid too, I really enjoyed Michael Peña as Enrique, that dude is just naturally charismatic and funny, also Casey Affleck is someone I don’t think I’ve seen in a comedy before so I was pleasantly surprised at his performance as Charlie. Gabourey Sidibe was pretty funny as Odessa despite the questionable accent, Alan Alda was also good as Arthur Shaw and Téa Leoni as Claire Denham was great as she was very serious and by-the-book, but also sweet and funny. But the real stars of this film were Ben Stiller, Eddie Murphy as Slide and Matthew Broderick as Josh Kovaks, Slide and Mr. Fitzhugh. Stiller is normally fun to watch and he brought a lot of charm and humour to this film, Murphy was also really great in this film, he had all of the key elements that make him so funny and magnetic as a comedic actor and this was the best film I’ve seen from him in a while and then there’s Broderick who I havent seen in many films in recent years, but here he was so funny because of his character’s cowardice and weak yet likeable persona. In conclusion Tower Heist was a good time and I’m glad that I watched it, the humour, action and music was solid and I would recommend it.

So have you seen Tower Heist and if so what do you think of it? Be sure to leave your thoughts on the comments below and I’ll see ya on the next review, laters! 😀

Posted by Hypersonic55 on November 19, 2016 in Film Reviews, Reviews

Howdy people of the internet, time for another film review and today I’ll be talking about Bridge of Spies. I’ve been following this film since it was announced and had early set photos released online and was curious to see what Tom Hanks and Steven Spielberg would come up with. So now that I’ve seen the film I’m ready to pass judgement.

“During the Cold War, an American lawyer is recruited to defend an arrested Soviet spy in court, and then help the CIA facilitate an exchange of the spy for the Soviet captured American U2 spy plane pilot, Francis Gary Powers.”

I thought the story was pretty good. At the center of this film is an American man trying to get a potentially dangerous Soviet spy justice and send him back home in exchange for another American pilot. The subject matter and time period for the events that took place in this film were great as it was a time full of unease, uncertainty and preconceived notions went it came to the tension between countries during the Cold War. Times were different, everyone was looking out for number one and while certain parties had their countries best interests at heart, the means they used weren’t always right especially when you looked at it from a moral, ethical or logical point of view. But what this film did well was to illustrate the fact that there was no right way of doing things, that situations good or bad could switch at the tip of a hat and that there was lot of grey areas when it came to the way in which the law, government and politics work as a whole. While there was certainly intense or dramatic moments of action, this film felt very personal, intimate and emotional thanks to the dialogue and these key scenes that took place between the may key characters, oh and it also helped that there were good moments of humour sprinkled in too which helped keep things from getting to depressing. 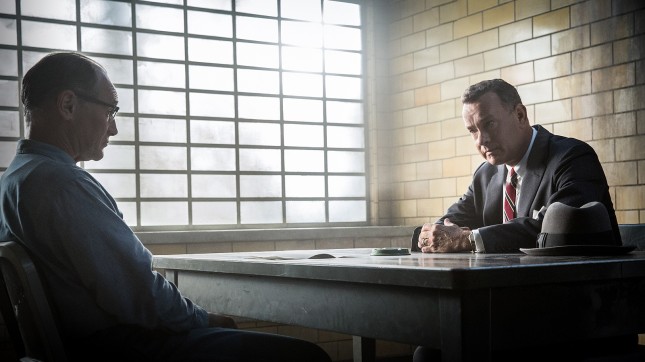 As for the cast, they did a fabulous job in their roles. Tom Hanks once again proves he’s the man as he turned in another good performance as James B. Donovan. Here we had a character who was smart, noble and passionate about not only the nature of his job but about justice and you could really get behind him because it was so righteous, likable and committed to his mission, plus the guy goes through hell being public enemy number one in America, had to travel to other countries and had to make tough calls and negotiate the heck out of some of these impossible scenarios. Thankfully Hanks had that right level of charm, subtly, sternness and passion that makes him so engaging to watch. Mark Rylance as Rudolf Abel was really great too, this guy was one of the most calm and collected people I have ever seen in a film in years, he barely showed emotion, yet was able to portray a lot of with just his words and Rylance was really engaging in this role. I also liked Amy Ryan as Mary McKenna Donovan and Scott Shepherd as Hoffman, Alan Alda and Austin Stowell were great as Thomas Watters and Francis Gary Powers. It was great to see Domenick Lombardozzi again this year (after his appearance in Marvel’s Daredevil) as Agent Blasco and another one of my favourite TV people, Jesse Plemons was also good as Murphy. and the rest of the cast were solid as well in addition to the really nice cinematography and soundtrack by Thomas Newman.

In conclusion Bridge of Spies was a film with an interesting story to tell full of many engaging, shocking and dramatic elements. The lack of action and the film’s duration may turn certain audience members off, however if you are interested in seeing character driven drama with some solid performances then you’ll enjoy this.

So have you seen Bridge of Spies and if so what did you think of it? Please be sure to drop a comment below and I’ll see you on the next review, laters! 😀