Today I get to talk about John Wick Chapter 2, a sequel I’ve been looking forward to for some time. I saw the first film not too long ago and really enjoyed it, and while I wasn’t in love with the idea of a sequel, I was curious to see what the filmmakers could do with this series going ahead. 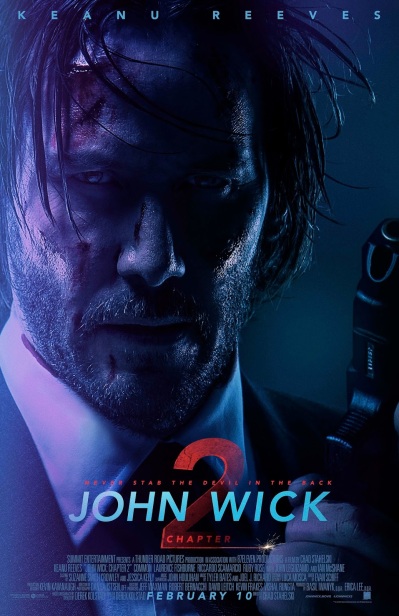 The plot can be summed up as the following: “After returning to the criminal underworld to repay a debt, John Wick discovers that a large bounty has been put on his life.” What I appreciated about this film was how it similar to the first but also how it found a way to be different at the same time, this sequel not only advanced John’s story, but also expanded the world and added extra layers to certain characters and information about the Continental and the nature of the assassin business. The plot felt like a natural progression from what’s come before and it was a fascinating and cool ride that added so much more to this series than I expected. The cast was all super effective. Firstly Keanu Reeves as John Wick, what a beast. Reeves really suits this kind of role, he’s intimidating, tough and acts with a physicality and purpose that makes Wick so fun and engaging to watch. Riccardo Scamarcio also made for a great villain as Santino D’Antonio, here we had a character with purpose, motivation and a cool and charismatic demeanour. Common was also really great as Cassian, this is probably Common’s most notable role for years and I loved his performance and how integral his character was to the plot. Ruby Rose as Ares was pretty effective, while I didn’t think much of her too much at first I feel like the end of the film I did enjoy Rose’s performance especially with her fight scenes. Laurence Fishburne as The Bowery King was also quite interesting, while Ian McShane was really good as Winston,and the appearances of John Leguizamo, Lance Reddick, Peter Stormare, Franco Nero and Peter Serafinowicz was very much appreciated. Oh but the best part was the visual presentation, good god, this film brought it! This film had good lighting, a striking use of colour and sweet cinematography during the action scenes, and speaking of the action scenes… Dear god, I thought the first film handled the action pretty well, but this film cranked things up to eleven! The gunfights were longer and more intense, the hand-to-hand combat was brutal and car chases were fast and chaotic. And the violence, damn, there was a lot of great broken bones, car crashes, blood splatter and so on, and the way everything was set up was incredibly creative, and some of the death scenes were just badass!! I also really enjoyed the film score by Tyler Bates and Joel J. Richard, it was very energetic and helped accentuate the action on-screen. In conclusion John Wick: Chapter 2 was a lot of fun and far better than I expected, with a solid story, good characters, awesome action choreography and violence, this is a sequel that’s worth watching.

So have you seen John Wick: Chapter 2 and if so what do you think of it? Be sure to leave your thoughts on the comments below and I’ll see ya on the next review, laters! 😀

Posted by Hypersonic55 on February 22, 2017 in Film Reviews, Reviews

One response to “ONE PARAGRAPH REVIEW: John Wick: Chapter 2”