Good day to you ladies and gents people, sorry for the lack of reviews as of recent but I’ve been busy with my new job, so my schedule’s been SO out of wack, but I’m back again to do a single paragraph review and it will be on the classic Beverly Hills Cop. This is one of my favourite 80’s films and since I hadn’t seen it in a few years I decided to check it out again. So without further ado here we go: 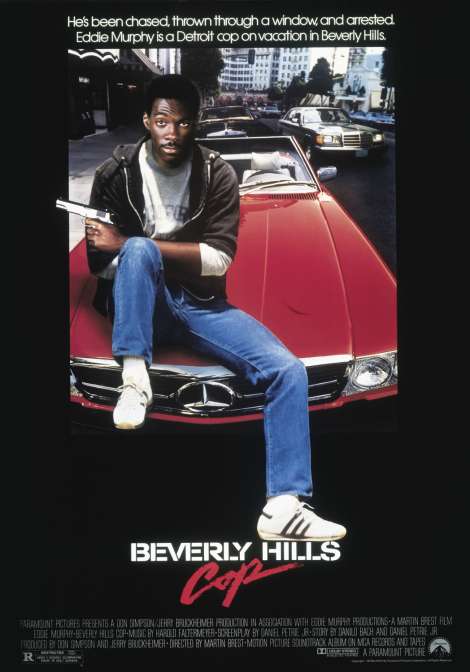 After Beverly Hills Cop, what can be said about this film that hasn’t been said already? It is a frigging awesome film and is one of the best examples of action comedy being done right. I love how this film is mainly about the main character, Axel Foley going on an adventure to figure out the murder of his best friend, but it is layered with humour, action, drama, conspiracy, drugs and other elements that culminate in one hell of a ride that’s super entertaining from start to finish. Straight from the beginning the film’s hilarious, the dialogue is so well-written with some great jokes and physical comedy, and thanks to the cast they really make these jokes pop. And speaking of the cast, let’s talk about Eddie Murphy as Axel Foley, damn, talk about a force of nature. Foley is wise-cracking, no-nonsense and hilarious dude, but he’s also very smart and creative and has a serious side when needed, and Murphy is pretty much in his element as he rides this perfect line between being a hilarious smart-ass and a likeable/relatable hero. John Ashton and Judge Reinhold are also brilliant as Sergeant John Taggart and Detective Billy Rosewood, these two have great chemistry and comedic timing as the officers tasked with stopping and then eventually helped out Foley. Ashton’s rough and ready style was nicely balanced but Reinhold’s lighthearted and silly approach. Steven Berkoff made for a really fun and captivating villain as Victor Maitland. Lisa Eilbacher also does well as Jenny Summers as she was not just a throwaway character, and was not only quintessential to the plot, but also had great amount of charisma and screen time too. Ronny Cox is also really good as Lieutenant Andrew Bogomil, Gil Hill has some of my favourite moments as Inspector Douglas Todd, and even Damon Wayans’ quick appearance is frigging awesome as well. Also, this film also has one of the most delightful and positive-feeling soundtracks I’ve come across in any film I’ve ever seen, the music selection is absolutely of its time period with such energetic, upbeat and fun 80’s song choices, but it is really about the gorgeous “Axel F” jam crafted by Harold Faltermeyer, and while one could argue that the song is overused during the course of the film, but I can’t get enough (much like “Danger Zone” from Top Gun). In the end Beverly Hills Cop is just a lot of fun and miss the simplicity of films like this especially when it comes to the blending of action and comedy, and the feel-good 80’s time period. If you haven’t seen this I would recommend it 100%. 😀

So that was my review, have you seen Beverly Hills Cop and if so what did you think of it? Please leave your comments below and I’ll see ya on the next review, laters! 😀