Howdy people of the internet, time for another review and today I’ll be talking about Ride Along 2. Now I had no intention of seeing this film because it was sequel no one asked for and from the trailers it looked like the first film again just with a slighty different story and set of characters. But when my friend invited me along to see it I said “Fuck it why not?” And now I’m gonna give you my thoughts on this sequel. 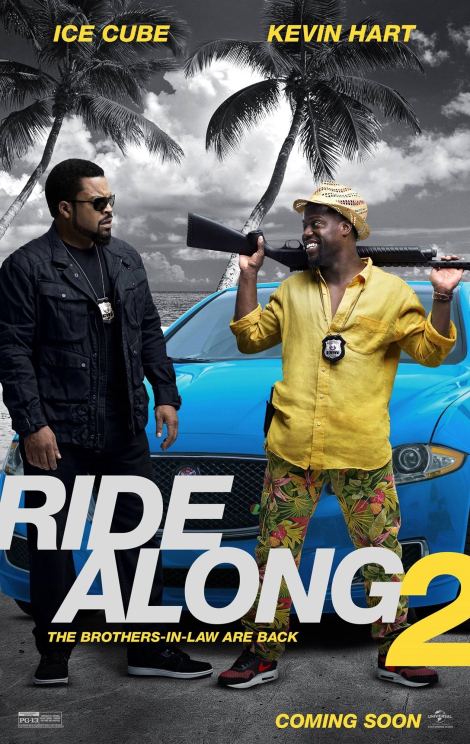 The story for the film can be described as the following:

“As his wedding day approaches, Ben heads to Miami with his soon-to-be brother-in-law James to bring down a drug dealer who’s supplying the dealers of Atlanta with product.”

I was actually going into this film ready to shit on it, but it was better than I expected, just a bit haha. This film was basically the same as the last film in the sense that there’s a lot of the same jokes, scenarios and story beats repeated and some of it is tolerable and some it just felt tiresome. I didn’t really care for the story, it wasn’t that engaging, I was just looking for laughs and to my surprise this film actually had me laughing. The humour in this film is pretty ridiculous and stupid, but once I got into the silly nature of the film there were several points where I actually laughed and was having a good time.

When it comes to the cast they’re fine. Ice Cube and Kevin Hart are the same as the ever were as Detective James Payton and Officer Ben Barber, while some of their personal situations have changed, Cube and Hart are pretty much just being themselves again. Sometimes it worked and sometimes I felt like rolling my eyes a little. Ken Jeong as A.J. felt similar to some of his previous roles that he’s done, but it didn’t stop him from being pretty fun at certain points. Also Olivia Munn as Maya Cruz, besides being super gorgeous Munn’s performance felt a little wooden and I didn’t really by her playing this tough lady cop and Benjamin Bratt was fine as Antonio Pope, he was charming and sneaky. And finally Bruce McGill was fine as Lieutenant Brooks and Tika Sumpter still looked hot as hell as Angela Payton-Barber and it was nice to see more for her in this film.

In conclusion Ride Along 2 was much better than I expected considering the negative reviews I’d seen online beforehand, while I won’t be watching it agin anytime soon, it made me laugh and it wasn’t a complete waste of time at the cinema. If you’re a fan of the first film or Kevin Hart then you’ll have fn with this, but for everyone else I would probably say skip it.

So have you seen Ride Along 2 and if so what did you think? Be sure to comment below and I’ll see ya on the next film review, laters! 😀

2 responses to “QUICK REVIEW: Ride Along 2”