Howdy people of the internet, today I am here to give you my review of Pokémon: Symphonic Evolutions, the orchestrated concert based on music in the Pokémon video game series. Last night, along with my sister, I went to London and witnessed this amazing musical sound and I just have to talk about it. 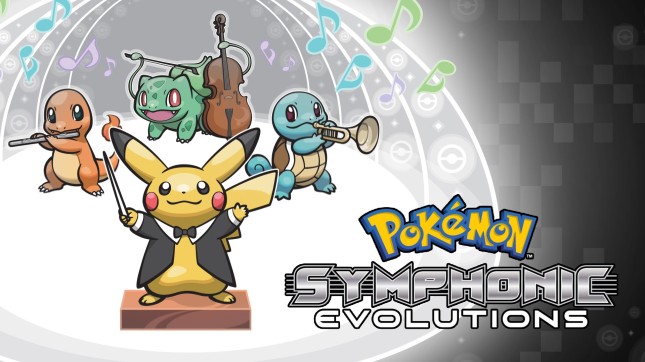 As soon as I got into Hammersmith Apollo, I noticed hundreds of people around all buzzing about the show, some in cosplay and others in general Nintendo-based attire, and use I sat down, I turned opened my 3DS and checked my StreetPass and after that it just didn’t end. I was constantly getting StreetPass hits and I loved it haha. Also during the waiting period there was a huge screen below the seating area of the orchestra which had the whole “Who’s That Pokémon?” thing going on with various Pokémon throughout all six generations showing up in silhouette and then being revealed, I did alright, but some of them I could guess for the life of me. 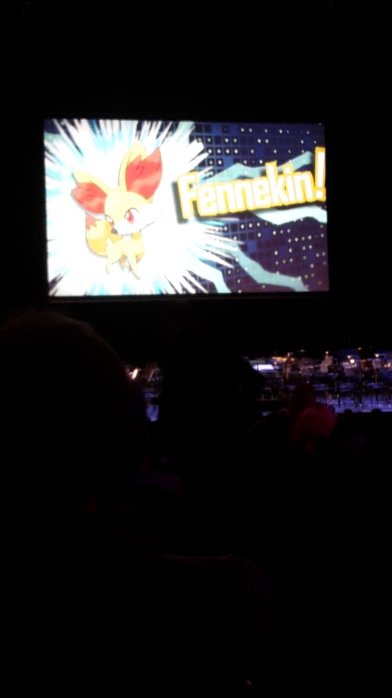 Sorry about the picture quality, but this was the view from my seat before the concert took place.

Oh but when the concert started, man, the mood in the room was elevated and the feeling amongst all the fans was electric. And once everything started, the feeling overwhelming happiness never left my heart.

This was the setlist:

What made the concert so great was musical was a combination of nostalgia, interesting musical arrangements and the sense of unity amongst the crowd.

So let me start with the nostalgia factor. For me, I’m not a hardcore Pokémon fan these days, however, back in the 90’s to early 00’s this franchise meant so much to me and even these days I still show love to Pokémon when appropriate. But seriously, hearing the “Overture” and seeing the title screens of all the Pokémon games from beginning to end was special and I could feel the emotion right in the center of my soul being lit up. After that hearing a lot of the music from Generation 1, 2 and 3 was kind of magical, like there was that feeling of being a kid/young teenager stepping into these games again for the first time when entering new places, going into battles or going to the Pokémon League.

As for the music, oh dear god. The music was gorgeous. Just like Symphony of the Goddesses, this concert really opened my eyes to how creative and surprising orchestrated versions of video game music can be when handled well. I mean to be honest there’s at least two or three well-known versions of the main Pokémon theme thanks to the 90’s anime show, and Super Smash Bros. Melee, but when the “Overture” came along, I was like “Damn, this is even more incredible than I imagined.” It was like if the main theme of Pokémon descended from heaven. Yeah it was that good and it set the tone so well. But what was cool about the concert was that not every arrangement was so powerful, intense or large in scale, some were quiet, intimate and had certain genre differences especially when it came to some of my favourites like “Ecruteak City“, “Songs of the Towers” (from Gold, Silver, and Crystal) and “Professor Sycamore“.

There were some beautiful moments in “Falling Ashes” (based on the music from Route 113 which was one of my favourite pieces from Ruby & Sapphire), while “Born to be a Champion” was delightful and “…” featured some of my favourite pieces from Gold, Silver, and Crystal especially the battle with Red which was AMAZING! But my favourite arrangement by far was “Prepare for Trouble” which was the music from the Silph Co building in Red, Blue, and Yellow, that’s always been one of my favourite songs in the series and to hear this dark, super dramatic, overwhleming beast of a song come and just rock my eardrums was fabulous. It sounded like something out of a film, maybe a thriller or a sci-fi adventure, either way, you could feel the impact of the song and it was just intense and badass. I WAS IN LOVE!

And then finally there was the sense of community. This crowd was very vocal, whether they were reacting to some of the funny dialogue on-screen from the NPC’s or just reacting to conductor Susie Seiter or the MC (who’s name I can’t reemember at the moment), everyone had moments to scream and shout in happiness. Oh but my favourite moment was when we all got to sing the main theme from the Pokémon anime, any fan knows the song, we’ve all sang it and to sing it there was frigging awesome! 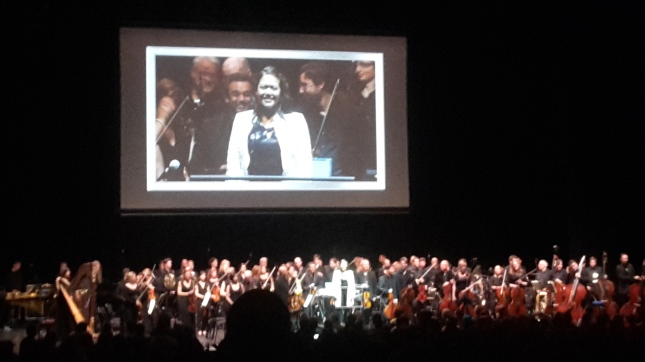 In conclusion Pokémon: Symphonic Evolutions was a fantastic experience, it was nostalgic, powerful and interactive. Like when I went to the last two Zelda concerts, these concerts have presented very different and impressive orchestrated versions of classic video game music, and while I wasn’t completely familiar with all of the music, it was gorgeous and I would highly recommend it.

So if you’re a Pokémon fan have you experienced this concert before and if so how was your experience? Leave them below in the comments section and I’ll catch ya on the next review yo.