Howdy ladies and gents of the internet, time to talk about some Marvel’s Agents of S.H.I.E.L.D. with season 3, episode 10 “Maveth“. So here we have the mid-season finale and after a pretty good episode last week, how did this one fare? Well read on and find out.

S.H.I.E.L.D battles Hydra head-to-head, which sees Coulson and Fitz take the ultimate risk while Daisy and the Inhumans try to keep Hydra at bay.

Let’s start with the stuff on the blue planet. A lot of stuff went down in this desert wasteland. Ward along with Fitz and some other Hydra agents went on the hunt for the ancient Inhuman and on their travels some interesting stuff happened like:

Seeing Coulson acting take out Ward with that brutal hand to the chest was pretty dramatic and impactful, and I’m glad that it was done. Ward had left a trail of pain too great to be left alive, and while a more flashy death would have been cool, the slow and personal approach that Coulson used left an impact for sure. I also liked the additional mythology added from Will (aka the ancient Inhuman) about the old society that was taken out and seeing that decayed city and Hydra statue in the background was nice as well.

Back on Earth there was plenty to enjoy like:

There was also a lot of great humour from Joey asking questions about abilities or Hunter’s explanation about SHIELD plans changing on the fly or May’s line about her not being afraid went Lincoln said that everyone felt like Joey did. These were really awesome lines of dialogue, oh and how cool was Coulson’s Tatooine line when he was on the blue planet? And in the end while a bit formulaic, it was great to see Mac and Daisy return to the plane along with Coulson and Fitz, oh and the slow motion moments of celebration between the characters was great, well besides Simmons, and that look that Coulson gave Fitz at the end of the episode, that was pretty emotional like he was saying, “The stuff that happened on that planet, I did what I did and we will never divulge those events to any of our friends.” 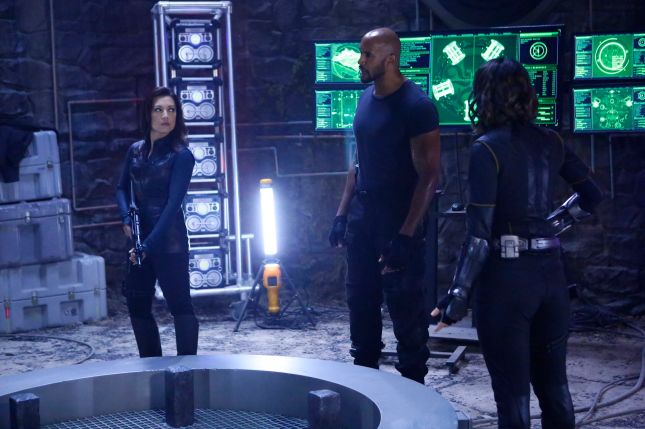 I was a little gutted that Andrew’s appearance in this episode didn’t really go anywhere, after being absent for a little while he was found, had a quick interaction with Simmons before being released, then turned into Lash and killed Hydra agents and suspended Inhumans before escaping off-screen. I had just hoped for something more with that character. Also when everyone was together at the end of the episode I didn’t care for Daisy and Lincoln kissing as I still don’t buy that relationship at all and I was also gutted when Simmons completely dismissed Fitz and went straight to the flying container to look for Will, and only after she found out he was gone, she accepted Fitz’s hug, proving that her feelings for Will were stronger than her connection to Fitz. I seriously think Fitz needs a new love interest because the people of this show really like making him suffer in the friend zone for some reason.

In conclusion “Maveth” was a pretty solid episode with a lot of plot points from the first side of season 3 taking shape with the mystery behind the monolith, Hydra’s agenda, Coulson’s revenge and the origins of Secret Warriors finally coming together. While this mid-season finale wasn’t as mind-blowing as I had hoped, it certainly had some

So what did you think of “Maveth“? Did you enjoy it or were you unimpressed? Whatever your thoughts are, be sure to drop them in the comments below and I’ll see you next year when Agents of S.H.I.E.L.D. returns in March, laters! 😀