Howdy ladies and gentlemen, today I’m gonna give you my thoughts on the London Film & Comic Con took place on the past weekend. I went last year and had a pretty good time (read my review here), so I decided I to go again because there was people at the convention this year I just had to see. Unlike last year I’ll only be talking about the one day that I experience rather than the three-day experience that I had before. There’s a lot to get through so let’s get started!

Now for those unaware, this convention is to do with films, TV, comics and video games. But the big focus is primarily on the special guests who attend, most people who go are normally coming to meet the celebrities who are there for talks, photo sessions and autographs signings. Otherwise you can buy a range of merchandise including, clothes, toys, anime and manga, DVDs, comics, artwork, posters and so on. In addition to that you can play video games new and old, see writers and artists of comic books or take pictures of cosplyers. So now I shall talk about my experience.

This was the scene from the entrance around 10am, yeah it was this full already.

My experience started out fine, I got the venue okay (even though I got one wrong train beforehand) and when I stepped outside the building I lined up in a long queue around 08:45am and for the first 20-30 minutes it was fine, but then the line stopped moving and there was nothing, for AGES. There was also a line across the road that was moving and yet we stuck at a stand still for at least an hour. My legs weren’t too jolly and I was getting a bit irritable, but EVENTUALLY the line moved and I got into the building just after 10am. So what did I get up to? Well I cruised around, talked to some fellow attendees. Got to see some cool toys, t-shirts and art. I even got to meet up with an old friend at the convention who I’d met at last year’s convention too. And of course I got to take some pictures of cosplayers but I didn’t do nearly as many as I would have liked because it was too crowded and I constantly had to be somewhere.

But I spent most of my day in queues, just moving from one to the other especially after 2pm. The only downtime I got was when I went upstairs and played in the video game section, while it was significantly smaller than last year’s it still had the one game that mattered and that was Super Smash Bros. Melee and you had to get stuck in. Just like last year I got into my groove real quick and started schooling some kids. I felt kind of bad because two of them weren’t that familiar with Melee’s game mechanics, one of them didn’t know how to do recovery attacks! I felt terrible and had to give them pointers. Out of the three there was one kid who was pretty good with Kirby. That being said I still kicked all of their asses on multiple occasions as Link, Donkey Kong and Captain Falcon to name a few. At one point the youngest kid got really pissed off and really wanted me dead shouting “I hate Donkey Kong!”, “Let’s all team up and kill him!” And when he did kill me on the odd occasion he got so happy like “Oh yeah, I killed you! I’m happy when I kill you!” I was like damn, this kid has issues. But it wasn’t like I was going to play badly, I’ll never pull my punches especially when it comes to Smash Bros. and even played with characters I’m bad with like Yoshi, Zelda/Sheik and Marth and I still laid waste to my enemies, besides one sudden death match which I won, every other match was a straight win. After around 30-40 minutes I pulled out to give other people a chance to play haha. 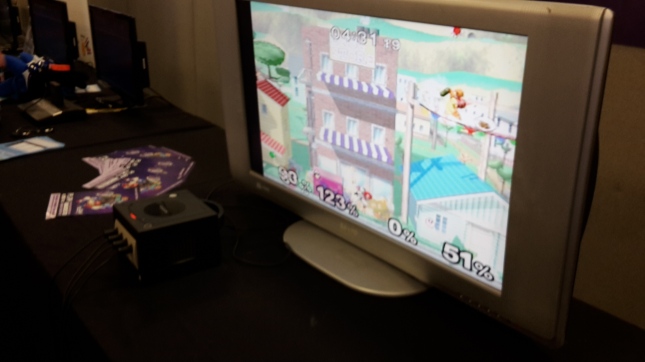 Once again I came to Smash Bros. Melee and just owned people.

But the best part was meeting the celebrities. Firstly I got to meet Erin Cahill who played Jen in Power Rangers Time Force. Ever since 2001 she’s been my favourite Pink Ranger because she was tough, more fleshed out and was just as much of a main character as Wes (Red Ranger) was. And Cahill played the part so well and I’d been dying to get to meet her in the flesh, and on the weekend I got to and I was beyond happy. I was basically fangirling in front of her saying how nice it was to meet her and how I’ve waited so long, but she was so nice, warm and receptive to my admiration. Erin said she liked my smile and said that it was fans like me that make her like conventions like this. I felt so honoured to be in her presence and she hugged me twice. I was pretty much in the best mood ever and it wasn’t even midday yet. 😛 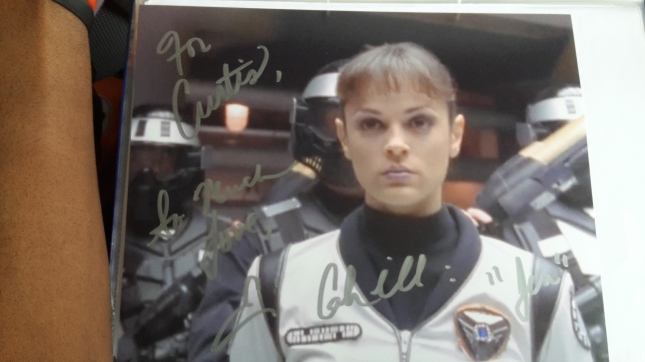 Erin was so cool!

Then after that I got to meet Jason David Frank, legendary Green and White Ranger from Mighty Morphin’ Power Rangers (a good few other PR series’). Meeting him was a childhood dream, I’ve had a mad appreciated this guy for years and in the last few years where he’s appeared in Super Power Beat Down and at all these conventions through social media has only made me love him more, but seeing him, shaking his hand and getting actual photo with him has been the most surreal experience ever, possibly more so than Stan Lee (with Stan I mentally prepared for it, but this was different). He was so cool, enthusiastic and just genuine. 😀 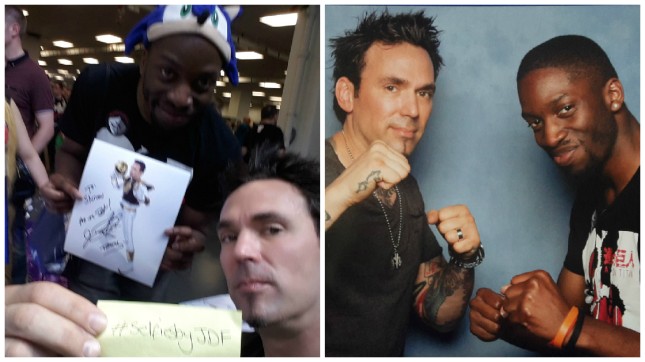 I got to meet one of my favourite actors from childhood. JDF is such a legend and is just as amazing in person! 😀

I also got a photo with the awesomeness that is Bill Paxton! I knew I had to see him in person after loving him in Twister, Aliens and Agents of S.H.I.E.L.D. and he was such gentlemen. So funny and kind, I went over to him and he asked me how I was, I said “I’m fine, haha hail Hydra.” He laughed, we took the picture and he said “Haha, hail Hydra indeed.” Don. That was singlehandedly my favourite photo session moment. 🙂 But then I got to meet Sigourney Weaver, she was one of the main reason for attending the convention. I mean when else am I going to meet Ellen Ripley or Dana/Zuul in the flesh? Weaver’s an amazing actress and I was so giddy to meet her, after I took my picture she asked me “Are you having fun?” and I was like “Yeah!” So happy! 😀 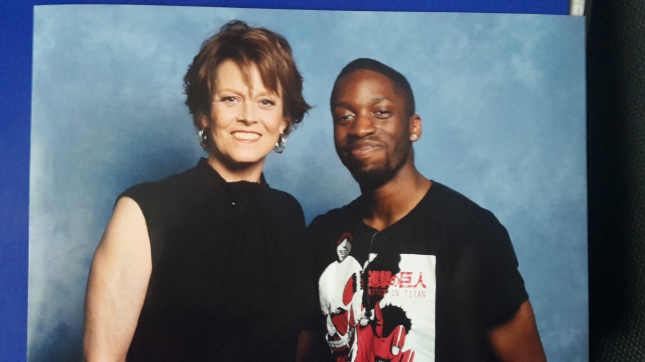 There were people I didn’t get to see/meet and stuff I never got around to doing. I never got to see Hayley Atwell (who I didn’t even know was attending until the morning I arrived, so gutted), I never got to see Michael J. Fox or Christopher Lloyd (super gutted especially about Lloyd) and Jason Faunt (Wes/red ranger from Time Force) even though I was right next to him on a few occasions I didn’t talk to him because I was short for time. I also didn’t get to talk to any of the artists at their stands and this time round I never got to sit down and see any talks at all. See, that’s how busy things got haha.

The thing about LFCC is that it is a pretty massive undertaking, the event is huge with A LOT to see and do, and if you’re not prepared you can be overwhelmed by the amount of chaos going on. There’s so many people, many places to go, so much to buy and SO MUCH SCHEDULING TO DO if you’re going after the celebrity signings and photo shoots. I had a lot of fun this year, but I was definitely done after my final photo shoot because all of the queuing I’d been doing. I’m not sure how I managed all three days last year, but I think that may have been because of the friends I was with and the fact that it was my first time. I will say that the venue was pretty big and cool but getting around proved to be quite troublesome and tedious because of the elevators that were always jam-packed and the stairwells that were full of constantly shifting people. And, just like last year, the organisation when it came to queueing not only to get inside the venue but also for the photo sessions was messy. While it was slighty better than last year, I still felt like the people who worked there just going with the flow and didn’t always have the situation under control.

In conclusion my second year at London Film & Comic Con was frigging mint. Besides all the queuing, unorganised waiting areas and super sweaty movements while getting from point A to point B, I had a hell of a good time. I got to see so many famous faces, live out some of my childhood dreams and get my game on with Smash Bros. Melee. I left this event with such a good feeling and lovely memories. Something tells me I’ll probably be back again next year if I’m available.

So if you attended London Film & Comic Con this year what did you think? Did you go for one day or the full weekend? And if you didn’t go would you consider going next year? Whatever your thoughts are be sure to leave them below and I’ll see ya on the next review. Laters! 😀