RSS
← Tom Holland is the New Spider-Man and Will be Directed by Jon Watts!
Month of Superhero Film Reviews 2: Spawn →

Howdy people of the north, south, east and west, and welcome to Day #24 of Month of Superhero Film Reviews 2! During this month I’ll be reviewing of some of the best, average and worst comic book adapted films. Today talking about that film where “I AM THE LAW!” is a very funny thing to say, I am of course talking about Judge Dredd.

LAAAAAAAAAAAAAAAAAAAAAAAAAAAAAAAAAAAAAAAAAW! Haha, Judge Dredd, oh yeah I remember this film. This is another film I’ve seen before and I consider it fun for all the wrong reasons. These days officially we have a much better version of this character with 2012’s Dredd, but before that awesomeness we have this version from the 90’s which is an experience to say the least.

The story can be summed up as the following:

“In a dystopian future, Joseph Dredd, the most famous Judge (a police officer with instant field judiciary powers) is convicted for a crime he did not commit while his murderous counterpart escapes.”

The story is certainly interesting but the execution is terrible. This is a tale of good versus evil, but also about betrayal, deception and revenge, that all sounds good on paper but the way this film handles these elements is very messy, muddled up and confusing. Had the film just streamlined itself and taken out a few of the narrative elements tied to other characters it would have been so much better. It also doesn’t help that there is a massive tonal inconsistency, the film is trying to be serious, but with all the one-liners, generic plot points and terrible comic relief you can’t take it seriously so when the film is trying to add drama or some emotion it feels out of place because of the cheesy and comedic tone. Also what is the scriptwriters obsession with the law? I understand that it is a very important aspect of the film, but all of the characters feel the need to mention it in every second sentence that they speak, its ridiculous and you could probably make a drinking game from it too. You’d be smashed afterward for sure. 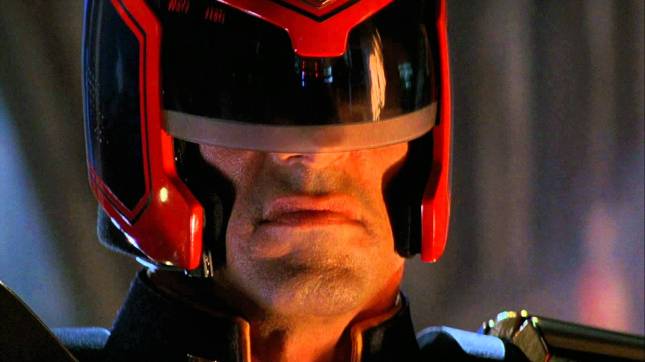 Now let’s talk about the cast. Firstly there’s Sylvester Stallone as Judge Dredd. Listen Stallone, I like him he’s a good actor, however, he was just terrible here. Sometimes you can’t understand what he’s saying because he’s shouting or mumbling which makes his words hard to comprehend, it also doesn’t help that he’s full of cheesy dialogue and one-liners that get old pretty fast and for a person whose supposed to be emotionless Dredd certainly likes to be a douche to people and does a lot of smiling and scowling.Rob Schneider as Fergee… This guy, he just pissed me off. Schneider tries his very best to be one of the most over-the-top, wise-cracking, wacky, silly and annoying people to ever come into existence in a film. Fergee thinks he’s witty and smart, but he’s just a fool who moans about everything and is such a little pain in the ass, I wanted him to die so many times. Oh but the person that takes the cake when it comes to over-the-top is Armand Assante as Rico Dredd. What the actual fuck man? This guy seemed like he was on some kind of drugs as he was so hyperactive, crazy, animated and ridiculous. If he’s not being creepy getting up in people’s faces then he’s shouting his lines at the top of his lungs, it does make for some humourous moments for sure but Assante is just on another level of madness.

I liked Diane Lane as Judge Hershey. This lady is smart, loyal, confident and logical, she’s also tough and can speak her mind and Lane acts with the most amount of realism and restraint out of the main cast. Max von Sydow was good as Chief Justice Fargo, like Lane, Sydow acted with restraint and realism and wasn’t cheesy in his performance. The same can’t be said for Jürgen Prochnow as Judge Griffin, he was fine up until a point and them went a little hammy towards the end. And finally I want to give a shout out to James Earl Jones as the Narrator at the beginning of the film, it was nice and I felt like Mufasa was reading me a bedtime story or something haha.

Now let’s talk about the presentation. Visually the film is okay but messy.  The film was trying very hard to be visually distinctive with the look of the city and the use of special effects, but it doesn’t look to polished and the green screen and CGI doesn’t look real enough to work in the advanced environment these characters live in. The costume design was also a bit bulky and silly and I think could have been slimmed down and refined for the Judges. As for the soundtrack, Alan Silvestri does a decent job with the score creating these dramatic and heroic themes, though the use of some them in certain scenes really doesn’t match what’s happening on-screen.

And lastly how does it compare to the comics? I have unfortunately not read the source material so I can’t comment.

So to conclude Judge Dredd is pretty bad film. I can understand what it was trying to do but it failed due to its messy story, over-acting and bad dialogue. Upon second viewing things that I didn’t like were more noticeable and while I can still laugh at the film it’s not that funny this time around. This is another one of those films you can only watch if you’re in it for the comedic aspects and if you’re drunk.

That’s 24 reviews done, only 6 more to go. So have you seen Judge Dredd and if so what are your thoughts on it? Drop me a comment and let me know your thoughts yo! Come back tomorrow and I’ll have a new film review online, until then peace out!

← Tom Holland is the New Spider-Man and Will be Directed by Jon Watts!
Month of Superhero Film Reviews 2: Spawn →