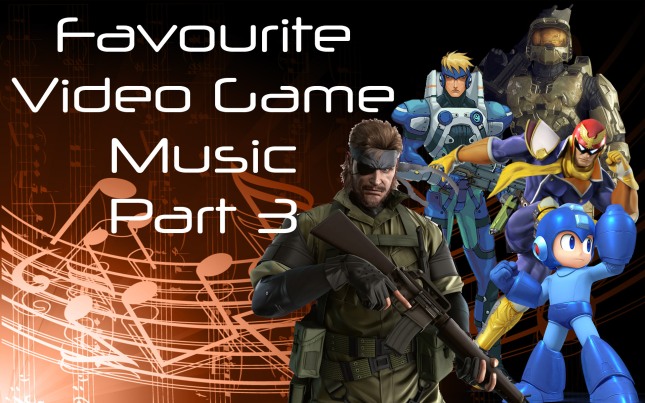 Howdy ladies and gents, and welcome to PART 3 of My Favourite Music In Video Games, a blog series dedicated to some of my favourite tunes in video games that I feel everyone should hear too. If you haven’t done so already, be sure to check out PART 1 and PART 2 of my music assessments. Today I’m gonna get a little more modern with my music findings today, but still have some blasts from the past as well. So let’s get started:

When it comes to the Phantasy Star series I’m not the biggest fan, I actually discovered this series after I played Phantasy Star Online Episode I & II for the GameCube in 2004. It was only after some research when I found out that the series had been since the days of the Sega Master System, Mega Drive/Genesis and Saturn as well as the compilations and remakes on the PlayStation 2. PSO Episode 1 & 2, was my window into the world of Phantasy Star which I loved and then there was PSO Episode 3: CARD Revolution which was very different kind of gaming experience but was still fun. But one thing is for sure, both games had awesome music. PSO Ep. 1 & 2 (the stronger of the two games) has awesome sounds like OPENING THEME ~ The whole new world ~ (Lala Version), the gorgeous For Eternal Glory, Pioneer 2, Mother earth of dishonesty PART 1 & PART 2, Growl, from the depths of the earth, From seeing the rough wave, Codes of Silence, OPENING THEME ~ The whole new world (Episode 2), Silent Palace and A longing to ancient times – PART 2 as some of my favourite examples. Then there’s PSO Ep. 3 with Via Tubus, Tower of Caelum, Scenario – Courage, Tener Sinus -Tener Coast-, Unguis Lapis, Mortis Fons -Fountain of Mortis-, Morgue PART 1 and Code -Deck- to name a few of the best tracks.

Yes, this is my jam. While I love the opening song for PSO Ep. 1 & 2 and the sound of Code -Deck- from PSO Ep. 3, I that think this is a great song. I don’t even know how to describe what this song sounds like, it is some kind of funky electronic sound and it isn’t overly epic or subtle, it’s one of those sort of songs you chill out with, like jazz in a way. I can’t describe while this song sounds so good, maybe it is because I spent so much time going to the shop in single player, but every time I hear this song, I feel like I’m falling in love and sitting through the summer of 2004 all over again, and that was a good time.

I’m going to be frank, I have never played a game in the Metal Gear series, well, besides the demo for Metal Gear Solid 3: Snake Eater on 3DS. I have been a gamer who has looked on at this franchise from the sidelines and has appreciated all of its unique qualities in terms of the gameplay, detailed stories, great graphics, in-game cinematics and of course great music. I never came across any of the music in the franchise until Super Smash Bros. Brawl, and it was there where I was introduced to such awesome tunes like Theme of Solid Snake (Metal Gear Solid 2), Yell “Dead Cell” (Metal Gear Solid 2), Calling to the Night (Metal Gear Solid Portable Ops), and the awesome Theme of Tara (Metal Gear MSX2).

The first time I heard this song wasn’t in MGS3, but in Super Smash Bros. Brawl and after my first listen I fell in love. True love. Not even a joke. This is a jazzy/classical piece of music that is sophisticated, super stylish and sexy. I know that the original has vocals, but I prefer this version because it is just about the music and my god it sounds so good as it goes from being subtle and mysterious to big, loud and impactful. The thing I immediately noticed about the song was how much it sounded like a James Bond film, you know, that sexy/classy sound from the Sean Connery/Roger Moore days of Bond and then to see that composer Norihiko Hibino actually referenced Bond as influence for this song only makes me smile even more.

Now we move on to the Halo series, this is another series I’m not a massive fan of. I’ve played Halo 1-3, but that was it because I never really had many friends who were interested in the series after the third game and that’s when I lost interest myself. I think I may have played Halo 4 one time last year, but I can not confirm that at the moment lol. The one thing I can still give the Halo series credit for is the music, the soundtracks in each game have a way of sounding so epic and large in scale, like you’re watching an incredible film that touches you on every emotional level, but it also manly as hell. There are many great sounds from Halo 1, 2 and 3, but the song I’ll always remember is the Main Theme from Halo 1, sure there have been many incarnations of the theme since the first game but this one beats them all. This song is one of the most manly and hardcore themes of any game in the history of existence.

In truth I could have easily picked the Main Theme and that would have been it, however then I came across this song and had to choose it over the main theme because it is longer, more dramatic and in the end it still features the main theme in there so everything works out just fine. The song starts with a soft, subtle and dramatic intro before breaking into the main theme of awesomeness. After a while the song drops into this dark, psychologically creepy sound and eventually picks up in the last minute and a half with the upbeat main theme, so cool.

Ever since the first game in the series on Super Nintendo, the F-Zero series has been home to many memorable tunes that fans have enjoyed since the 90’s. The most classic of these tunes in Mute City, it is the signature song of the franchise in a way and has had several incarnations in F-Zero, F-Zero X, F-Zero GX, Climax and in Super Smash Bros. Melee & Brawl. However F-Zero isn’t just about Mute City, there are a number of other great songs from the series like White Land (SSBB version) and Fire Field (SSBB version). But the best game for music really was F-Zero GX with a rock/techno soundtrack which is bursting with life and energy with some of my favourite tracks including U-Rays, Like A Snake, Big Blue and the brilliant Planet Colors.

This is my jam for life! I swear since I hearing this song in F-Zero GX it changed my life, this is the kind of song that sets my soul on fire. It has a gorgeous rock/jazzy sound with a quick pace and a crazy switch up when it reaches pitch mode. The song gets me in a good mood and makes me feel happy and feel the thrill of racing in F-Zero even when I’m not playing the games, it is that powerful.

Ah the Mega Man franchise. This is a series I’ve always known about, but never really played until 2008/9. In truth I’ve only played three MM games; firstly there was Mega Man Star Force 3: Black Ace, Mega Man 2 and Mega Man & Bass. I think after playing Mega Man 2 I finally understood the importance of the game series from not only a gameplay perspective but from a musical one and the more I explored the main series of games, the more I noticed how much they’ve been in fan-based videos, reviews and covers by people on YouTube. In terms of tunes I like Spark Man Stage from Mega Man 3, but I’m primarily a lover of Mega Man 2‘s soundtrack, call me generic, but you can’t argue with the awesome sounds of Title Music Part 1 & Part 2, Crash Man Stage, Metal Man Stage, Wood Man Stage and Air Man Stage to name a few. And then of course there is the remixes from Super Smash Bros. 4 with Airman Stage Remix, Sparkman Remix and the badass Mega Man 2 Melody.

It was honestly a close call between this and the Mega Man 2 Melody but in the end you can’t beat a classic. Dr. Wily Stage Theme is pretty much the quintessential MM song, it is a classic for a reason. This is the song that gets you in the mood to battle, gets your heart racing and feels your heart and ears with happiness. I was familiar with this song before I even knew that it was from MM2, however when I got to Wily Stage 1 and heard this, I knew I had arrived at the best song in the game. This song just sounds beyond amazing and proves that songs from before the 16-bit era of gaming can still sound badass.

So there you have it, my another five picks. Tell me if you’re familiar, like or dislike my choices in the comments below. Also, if there are any that you’d like to see in the future let me know. Other than that, make sure to come back for some more music madness in the world of video games. Bye bye for now! 😀

One response to “My Favourite Music In Video Games Part 3”