I Feel Good In This Get On Up Review

Good day to you ladies and gents, time for a new film review and today I’ll be talking about Get On Up, a film I have been eagerly anticipating as of late. I wasn’t initially fussed about another biopic, however since the main star, Chadwick Boseman became part of the Marvel Cinematic Universe recently I knew that I had to give this film a watch, especially because of the buzz that was coming from America. So does this film meet the hype or not? Well read on and find out. 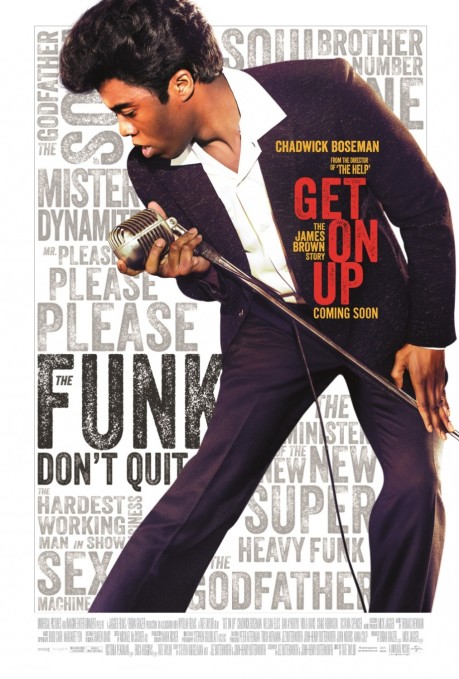 The story for the film can be summarised as the following:

“A chronicle of James Brown’s rise from extreme poverty to become one of the most influential musicians in history.”

I thought the story was pretty good, what we got was a film documenting the major points in James Brown’s life from childhood to the early 90’s. I thought it was interesting to see the Brown go from strength to strength to become to the person who he always wanted to be through, talent, luck and help from his friends. The film didn’t shy away from the dark side of James Brown’s life in show business and his personal life too. Overall the story was an enjoyable and engaging one with go piece-to-camera moments that make you feel like you’re part of the action. If I had to fault the film I would say that the story here felt like it omitted certain details of Brown’s life, especially when it comes to his family and because of the time jumps between years it felt like there was so much more that could have been explored. Plus since the film was non-linear and hopped forward and backwards throughout Brown’s life, sometimes it was easy to lose what time period you were in or feel like there wasn’t enough time to take certain things in. 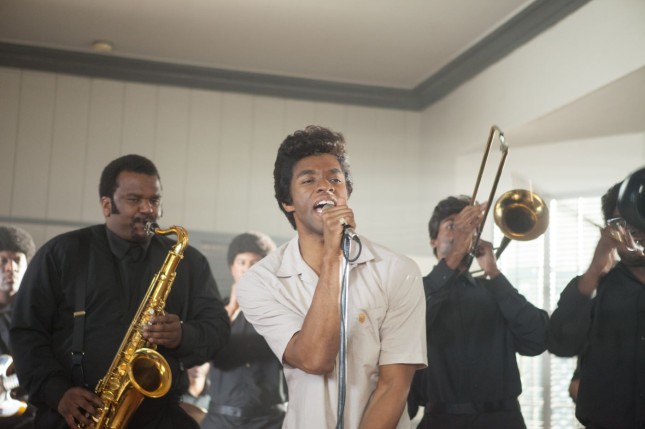 When it comes to the cast they are very nice, but this is Chadwick Boseman’s time to shine as he just kills it as James Brown. Now I liked Boseman in 42, however his acting talent is just one another level in this film. My god, Boseman is just on fire as the godfather of soul. The man struts, dances and talks in a way that embodies the legendary artist. I’m not a Brown expert, but it felt like Boseman took on the role with such care, charisma and tenacity that you forget that he’s even there, just the subtle mannerisms are well-done and my god Boseman dances so well too. What a don! The other strong performance came from Nelsan Ellis as Bobby Byrd, Ellis played the role of Brown’s long-term friend and music colleague. What’s interesting about Byrd is the fact that he was Brown’s back and respects his musical talents, however he also has aspirations of his own and sees that when Brown is in the wrong. I also loved seeing Dan Aykroyd as Ben Bart, just seeing Aykroyd in a substantial role for the first time in ages was a great feeling. Viola Davis as Susie Brown is pretty good, while Octavia Spencer as usual does a fine job as Aunt Honey. I also enjoyed seeing Craig Robinson in a more serious role as Maceo Parker, while Jill Scott was almost unrecognizable and good as Deidre “Dee-Dee” Jenkins. I liked seeing Lennie James (from The Walking Dead) as Joseph “Joe” James and finally Brandon Mychal Smith did a fine job as Little Richard.

And then there’s the music, damn, if you’re not in the mood to dance during this film then there is something wrong you because it is badass. This film is pretty much a best of collection of the most classic James Brown songs and I was loving every minute of it. While I’m not the biggest Jame Brown fan, I’ve known of his music since childhood and several of his songs make me feel joy and happiness in ways that cannot be put into words, and this film had SO many good jams. The highlights for me was hearing “Super bad” and “Get Up (I Feel Like Being a) Sex Machine“, the former being one of my favourite songs of all time. The soundtrack by Thomas Newman is also very nice and dramatic too.

In conclusion Get On Up is a pretty good biopic with a strong central performance, an intriguing look into James Brown’s life and has a beautiful selection of music. While there is certainly story aspects that are left out and some similarities to 2004’s Ray which I couldn’t separate while watching the film, that being said, this film is a good time and I would recommend it especially for fans of Brown’s music.