Howdy ladies and gents, time for a fresh film review and today I’ll be talking about Nightcrawler. Now this was a film I had seen the trailers for but wasn’t initially interested in, I mean it looked interesting enough but I wasn’t sure what the film was about exactly and whether it would be my kind of film. But the other day I decided to check it out and now I’m ready to pass judgement.

The film’s story can be described as the following:

“When Lou Bloom, a driven man desperate for work, muscles into the world of L.A. crime journalism, he blurs the line between observer and participant to become the star of his own story. Aiding him in his effort is Nina, a TV-news veteran.”

The way I explain the story would be in following sentence: this is one maniac’s journey to be the best at what he does and he’ll do whatever it takes to get there regardless of the moral, ethical or legal ramifications.

I feel like that is a good summary for the main character and his actions throughout this film. Nightcrawler is a great film and that is largely thanks to its story, it presents you with something that you are familiar with (TV journalism) and presents you with the darker side of how it gets prepared before going to air. The film moves at a decent pace, and as we follow Lou things only get murkier and more dangerous with a great level of tension, suspense and action, all of it making the film more and more enticing. Now while these practices I doubt are used in real life, to see it portrayed in this film does give you a few things to think about like:

Obviously some of these questions only relate to the film, but it does leave you wondering about a few details here and there. The one thing I can say that could be considered a nitpick is the ending, the ending for this film really surprised me and I left thinking “Really? Damn, okay, well that was unexpected.” Some may not agree with the way it was handled but I thought I should just point that out. 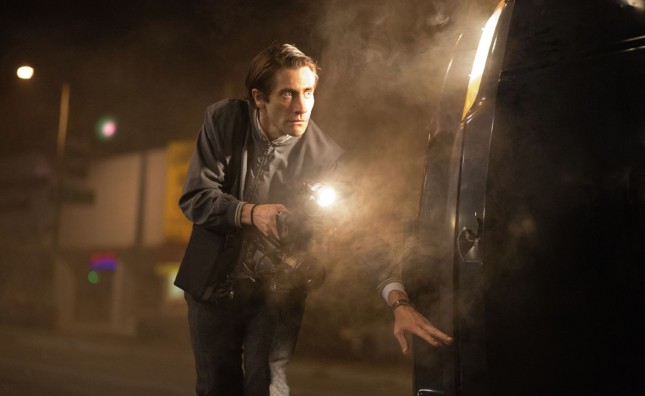 When it comes to the cast they were all pretty good, but it is the brilliant performance Jake Gyllenhaal as Louis Bloom that steals the show. Lou is a man with ambitions and determination, however he is also corrupt, pathological and has serious issues with anger and being denied anything that he wants. There is something wrong and yet hugely engaging about Lou, he is a man who lies, cheats and uses blackmail to get a better life which makes him terrible, but he is also smart, a quick leaner, adaptable and can fight himself out of any corner he gets pushed into. Gyllenhaal is one of the actors I’ve seen people give a lot of grief to, much like Mark Wahlberg, people have questioned Gyllenhaal’s acting abilities or just his credibility, I believe that before 2009, he was just alright actor, good but nothing special. But after I saw him in Brothers and Source Code I became a fan and in this film he’s pretty much excelled to his highest level yet. The guy can act very well and takes on the persona of this very questionable human being who you would not want to associate yourself with.

Rene Russo was also great as Nina, she played a character who basically knows the way TV news works and is always interested in the next big story, so when she comes into contact with Lou and they form an alliance, she gets what she wants and so does he, however as things progress Nina finds herself in a bit of a tight spot and it seems like Lou is the only one who can help her. In the end she wants success just as much as Lou does and because of her assertiveness and self-centered attitude she will bend the rules to have her way. Russo was really good, I liked seeing her in the role that allowed her to be versatile in terms of her emotions so she could and she was believable too. Riz Ahmed as Rick was pretty good, he’s Lou’s sidekick. He joins Lou’s line of work not really knowing too much about it and having to learn on the go while questioning certain things along the way. I think his character was there to say what most audience members were thinking and get responses from Lou that you couldn’t say yourself. On and Bill Paxton was awesome as Joe Loder, any time Paxton is around in a film you’re normally guaranteed to like him and this film is no exception. This character pretty much taps into Paxton’s more charismatic and humorous side and it is delightful to watch. And another element about the film I really liked was the soundtrack by James Newton Howard, this man has done a lot of good soundtracks and this film’s sound is great, I liked the use of instruments and how the score had this strange balance between optimism and despair throughout.

In conclusion Nightcrawler is a great film and is far more interesting and engaging than I thought it would be. The story is unbelievable and explores a lot of morals and ethics in the business of television news reporting and Jake Gyllenhaal gives is best performance to date as a character who is both which may just surprise you in a few days.

So have you seen Nightcrawler and if so what did you think of it? Whatever your thoughts are be sure to drop a comment below and I’ll see ya on the next film review yo. 😀