RSS
← Let’s Talk About The Guardians of the Galaxy: Awesome Mix Vol. 1
September’s Here & Summer’s Over. →

Howdy ladies and gentlemen and welcome to another TV review and after a little while away, I return to Buffy the Vampire Slayer. So after a good introduction with season 1 and then falling in love with season 2, I now step into season 3. Annoyingly, I’ve had to watch the first half of this season twice as I started it last December, then dropped it after university got more intense and didn’t start watching again until July. Before going into this season my friends told me that the show only gets better from season 2 onwards and to say that I was hyped would be an understatement. Anyways, enough chatter, time to talk about season 3 of Buffy. Minor spoilers follow… 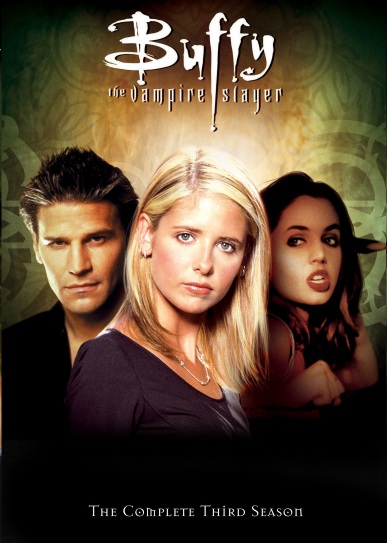 As usual, we follow the life of Buffy Summers; normal teenager by day, vampire slayer by night. As part of the “Scooby Gang” along with Giles, Xander and Willow, except this time with less Cordelia and more Oz, as they take on the supernatural happenings that go on in Sunnydale. The show continues to have episodic stories, but also has stories that continue over the course of the season that relate to things that have happened in the past and present too. This season deal with the relationship status of  Buffy and Angel, the new slayer Faith, the ascension of the mayor of Sunnydale and what happens when Xander and Willow get more screen time.

Story-wise this season 3 was another great season filled with a great deal of drama and heartbreaking situations involving the main characters. Coming off of a fairly emotional climax at the end of season 2, this season provides plenty of challenges for not only Buffy, but also for Willow, Xander, Oz, Cordelia and Giles. This season predominately revolves around love and relationships and this leads to some really emotional and unexpected territories for all the main characters involved, but on top of that there is a theme of the future and moving on and that applies to the characters, their relationships, school lives and then eventually moving to college as well. One of the things I never highlighted in my reviews of season 1 and 2 is how well this show gets the balance between humour and drama just right, because even in a scene that’s very emotional or super serious there will always be someone around to crack a joke to break the tension. The rise of power for the mayor and the appearances of the different types of demons kept things varied and different, plus the twists and turns this show throws at you always keeps you guessing which was fun. I also feel like this season, for all the drama that took place, was a little lighter in tone and featured a lot more comedic moments and because of that I wasn’t left as emotionally scarred as I was at the end of season 2. I also wanted to mention how much I liked the action in this series, from the crazy and varied monster designs, to all the cool hand-to-hand combat scenes, it was all badass with my highlights definitely being the final fight between Buffy and Faith and the war at Sunnydale High’s graduation, that was some epic and mental stuff.

As the cast they are all awesome as recurring cast members really get some great moments to show off their acting skills and get better as their characters, while new cast members add a lot of interesting flavours to the show’s regular dynamic. What I liked was that everyone had relevance and even when some characters went bad the show still tried to show some moments of redemption.

So let’s start with Sarah Michelle Gellar as Buffy Summers. SMG is still amazing as Buffy, her acting is believable, raw and really feel for her in these moments of crisis. In this season Buffy pretty much has everything thrown at her as the slayer and yet still has to deal with her school life, her mum, friends and relationships too. At times she is a bit of an emotional wreck, but considering all the stuff she has to deal with it is hardly surprising and this leads to some very difficult fights and conversations. All of this happens and SMG still looks beautiful and cute as hell haha. Then we have David Boreanaz as Angel. After the events of last season, I wondered if he would return for this season, but at the same time I knew he would be back and he is totally on-point as he still a brooding, complex and an incredibly layered person who has a great deal of knowledge and experience of life because of his immortality. I like how he and Buffy had to rekindle their relationship and be in love, but also have issues and eventually break up. Both Gellar and Boreanaz have great chemistry and you totally buy the fact these two are undeniably in love but have aspects of their lives that won’t keep them together permanently.

Nicholas Brendon is still awesome as Xander Harris, in the earlier side of this season his jokes are not as funny as usual, but eventually he finds his rhythm and delivers some of my favourite laughs in this season. I like how this show gave him moments to shine and finally address his lack of usefulness in the main gang. Alyson Hannigan really got more interesting as Willow Rosenberg, last season really built up Willow’s character, but here she totally got to be more than she ever was before. Even though she was still her cute and smart self, this time round she seemed more assertive, adventurous and was in the thick of the action a lot more, and I loved her for that. Charisma Carpenter still looked incredible and was interesting as Cordelia Chase, she pretty much goes from being one of the members of the group to going back to her old ways in season 1, you know, being cruel and hurtful bitch. Anthony Stewart Head as Rupert Giles is still one of the coolest dudes ever, he is always there to help Buffy and company, but he is also pretty sneaky and after learning more about his past you get to appreciate him even more. Seth Green as Oz is again the guy who isn’t very emotive, but provides moments of humor and got involved in more of the active with Buffy and company while also advancing his relationship with Willow too. Oz is probably my least favourite character in the group because he isn’t as charismatic as the rest of the gang, but he does have his moments where he’s pretty cool.

Now let’s mention Eliza Dushku, who wonderfully plays Faith Lehane, damn! When she first stepped on the scene I fell in love. I was mainly familiar with Dushku from Dollhouse, so to see her so much younger here was an unexpected surprise. At first Faith is the new slayer who is a lot more aggressive, out-going and carefree than Buffy and it is fun to have her around as this massive contrast from our regular slayer, but after the series progresses and things take a turn for the worse, you see that Faith has a much darker side that starts to take over. At first I loved Faith’s spunky and more action-oriented attitude, but then she became a total bitch, but that’s what made her cool to watch as a villain. And we can’t talk about Faith without mentioning Harry Groener as Mayor Richard Wilkins. This guy is awesome, the reason I like him as the dominant villain of this season is because he’s not your conventional ‘I’m evil all the time’ kind of bad guy, he is very quirky, humourous and rarely ever demonstrates any negative thinking. That being said, the guy can get pretty unforgiving, ruthless and when things really start going badly for him the man can pretty much freak out and that’s what I really appreciated about Groener’s performance.

Kristine Sutherland is pretty good as Joyce Summers, after the events of last season she has a hard time dealing with what Buffy did and trusting her daughter is very an easy thing from then on and Joyce definitely has some fun moments in this season too especially with Giles. Alexis Denisof as Wesley Wyndam-Pryce was pretty funny, he’s the new watcher who is supposed to come in and replace Giles, but he is pretty much ignored most of the time and no one takes him seriously. He’s much like Giles (being English and have similar mannerisms), but he doesn’t have a backbone and no one really likes him, well besides Cordelia which is still the weirdest thing ever. Armin Shimerman as Principal Snyder is still a douche, but he is a pretty funny douche though, and seeing him in more humourous situations definitely helped me like him more this time around. Emma Caulfield was funny and entertaining as Anya and I was not expecting to see her so much leading up to the end of the series and Danny Strong as Jonathan Levinson has been one of my favourite hidden school characters and to see him have more screen time was awesome. And finally seeing James Marsters return briefly as Spike was an unexpected and joyful moment in time, they guy was just as funny, crazy and British as always, but he also gave a brief statement about love and relationships and I feel is one of the best bits of dialogue in the series. 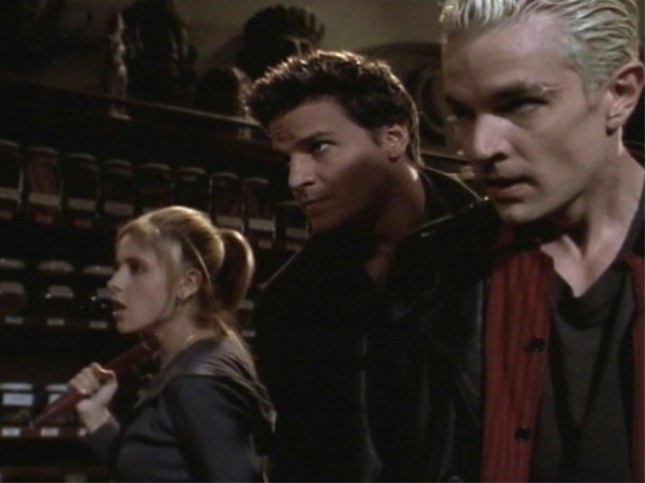 So to conclude season 3 of Buffy the Vampire Slayer is another great series of episodes that featured a great deal of action, drama and humour. While I don’t feel like this season left the same kind of dramatic impact that the previous season did, there was a great deal of character development, fun and excitement for Buffy and the rest of the main cast here and I’m interested to see what happens in season 4.

← Let’s Talk About The Guardians of the Galaxy: Awesome Mix Vol. 1
September’s Here & Summer’s Over. →