RSS
← My Favourite Music In Video Games Part 2
I’m Back Again And Ready To Rock! →

Good day to you ladies and gentlemen and welcome to another film review, today I will be doing my review on one of the last films of the summer I’ve been looking forward to, The Expendables 3. Now the first film when it came out in 2010 was a nice bit of fun and the sequel just got crazier and a lot more campy too, but was still hella fun. So here we are two years later with third film which brings back the main cast along with even more established action heroes and some new faces too. So does it succeed or is this film overkill of this series of films? Well read on and find out! 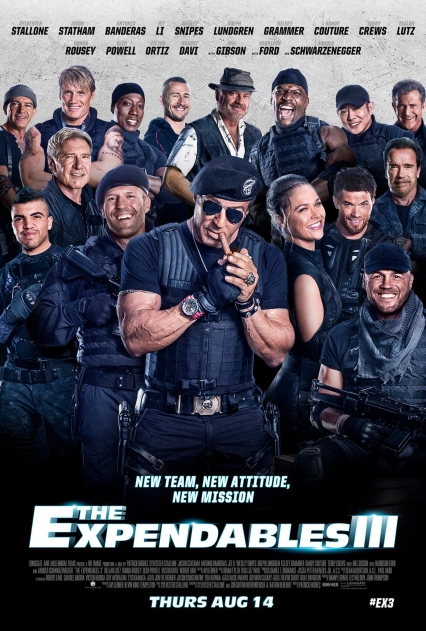 The story can be summarized as the following:

“Leader of the Expendables Barney Ross augments his team with new blood for a personal battle: to take down Conrad Stonebanks, the Expendables co-founder and notorious arms trader who is hell bent on wiping out Barney and every single one of his associates.”

I thought the story was good for the most part. In terms of tone this film kind of meets somewhere in-between the first and second film where it is kind of serious and kind of campy. The story isn’t anything special and as a tale of revenge with people of the past coming to back to cause havoc it isn’t going to win any points for originality. That being said the story was solid, had a reason for being and was better than the first film’s overly dramatic tone. The humour is definitely on display throughout and while some of the jokes fall a bit flat, most of them are pretty good with nice banter between team members and the nice self referenced. This film was probably the most modern influenced of this series of films as it not only takes on a younger set of mercenaries but also take into account how technology helps with tactical-based scenarios. Now whether I like this film more so than Expendables 2 remains to be seen as I haven’t seen it since 2012, but now I like this one better. 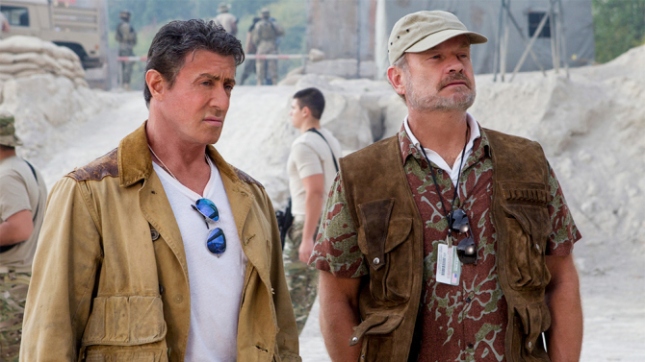 As for the cast they’re just as good as they have ever been, but some clearly stand out more than others. The best people in this film was Sylvester Stallone, Wesley Snipes, Antonio Banderas and Mel Gibson.

Firstly Sylvester Stallone as Barney Ross is pretty much the same as he was before, he’s big, gets the most screen time and while his speech is still hard to comprehend at times, the man still knows how to move for a man in his 60’s and gets the job done when it comes to action. Then there’s Wesley Snipes as Doc who I was so glad to see back on the big screen, the guy was totally charismatic and funny and I liked his banter with his other comrades, while there wasn’t too much martial arts from him, what action scenes he did were pretty cool. Antonio Banderas as Galgo was such a riot, the dude is primarily there for comic relief, but he stole every scene was in because he talked so much and was so over-the-top. And Mel Gibson as Conrad Stonebanks, damn he was cool. Gibson hasn’t been in many big films recently, but seeing him in this villain role really makes me want to see more of him. Stonebanks is your typical cold, evil and humourous bad guy that enjoys taunting and toying with his enemies and Gibson was clearly having fun with this rle which I loved.

The rest of cast are decent, Jason Statham is still badass as Lee Christmas, Dolph Lundgren as Gunnar Jensen and Randy Couture as Toll Road are fine and Terry Crews as Hale Caesar while in a smaller role was still kick ass. I enjoyed Kelsey Grammer’s appearance as Bonaparte, the man didn’t do very much but he had some cool and moments with Stallone and some of the new recruits. Arnold Schwarzenegger as Trench takes on a smaller role than the last film but is still awesome in several of his scenes especially when it comes to his dialogue. Poor Jet Li as Yin Yang, the dude barely got any screen time at all, the character was pretty much wasted. Harrison Ford as Max Drummer was cool, this is the most movement I’ve seen from him in recent films, he was fun and intimidating. Oh and shout out to Glen Powell as Thorn and Ronda Rousey as Luna (she was gorgeous and badass).

When it comes to the presentation The Expendables 3 is pretty good. Just like the previous films the action comes thick and fast and comes in the form of mainly fight fights, some hand-to-hand combat and big action set pieces with various vehicles and explosions galore. That being said some of the action wasn’t as special or memorable as what has come before, also annoying is the amount of CGI used in the film as it is so obvious when it’s used and it really takes me out of the film. As for the soundtrack, Brian Tyler comes back to score the music and it is pretty much more of the same, nothing that memorable but not too shabby. The music works for the film and elevates the action-based scenes.

In conclusion The Expendables 3 is possibly the best of the Expendables films in my opinion, while the laughs aren’t always there and the CGI is still pretty, I feel like this is the most consistent and cohesive of the films with a good balance between campiness and seriousness and when the action goes down it is totally chaotic. Any fans of these classic action stars should be satisfied with the film, it may not have the nostalgia factor or originality from the previous instalments but it is hard to deny the fun that comes from seeing some of these actors together on-screen having a good time.

So have you seen The Expendables 3 and if so what did you think of it? Well that’s been my review ladies and gentlemen, hopefully you enjoyed and drop me a comment, let me know what you thought of the film. Until next time, laters! 😀

← My Favourite Music In Video Games Part 2
I’m Back Again And Ready To Rock! →

5 responses to “The Expendables 3 Review”