Guardians of the Galaxy Review

Good day to you ladies and gents, time for a film review I was meant to have done last week Friday, I am of course talking about the film that’s on fire in the cinema right now, Guardians of the Galaxy. At this point in time I’ve already seen the film twice and I’m not going to hide the fact that I think this film is incredible and I’m going to tell you why in this review!

The story for this film can be described as the following:

“Brash adventurer Peter Quill finds himself the object of an unrelenting bounty hunt after stealing a mysterious orb coveted by Ronan, a powerful villain with ambitions that threaten the entire universe. To evade the ever-persistent Ronan, Quill is forced into an uneasy truce with a quartet of disparate misfits-Rocket, a gun-toting raccoon, Groot, a tree-like humanoid, the deadly and enigmatic Gamora and the revenge-driven Drax the Destroyer. But when Quill discovers the true power of the orb and the menace it poses to the cosmos, he must do his best to rally his ragtag rivals for a last, desperate stand-with the galaxy’s fate in the balance.”

The story in this film basically involves a group of misfits from very different backgrounds coming together to become something more and take out a common enemy. Yes this a type of story that has been done many times in the past and very recently with Marvel’s Avengers film that came out two years ago, but this film is so delightfully different in its execution that it easily stands on its own two feet. Guardians of the Galaxy is not only a very different kind of Marvel film but also a different brand of superhero film too. And in a way I wouldn’t even brand it in the superhero genre as this film is clearly of the science fiction genre and it has all the great codes and conventions of what makes the genre so fun to watch. The film is incredibly strange and quirky, it is not typical in any way, there is so much unexpected moments for humour spread throughout and luckily the humour isn’t over-bearing as it has a reason for being there. In addition to the comedy there is a surprising amount of heart to this film. I feel like Marvel Studios are diving deeper into emotional territories and producing very intriguing stories with intimate character moments that are well-crafted and engaging. This film has a great balance of humour and seriousness, and that’s the thing that I think will surprise people. For all the comedic moments there are also some moments to think and reflect, be melancholy and a lot more.

The performances were all great and the core team of heroes are probably the best set of characters together since the Avengers were assembled. Firstly Chris Pratt just ruled as Peter Quill / Star-Lord, he is a man with history and now lives life on the edge sleeping with women and obtaining special treasures. It is not until he sees the danger of the item he holds that he decides to do something that benefits the galaxy and not just himself by assembling his group of misfits. Pratt has so much energy and charisma and it makes for such an engaging, funny and well-rounded performance. Zoe Saldana as Gamora is awesome, she is deadly, sexy and a totally cool warrior. Gamora is clearly a woman with a troubled past and wants to start life anew but happens have run into some complications along the way involving her sister and Quill. Saldana is no stranger to action and sci-fi and she is so beautiful and good in this role. Bradley Cooper as the voice of Rocket Raccoon was pretty much the best thing ever. The character is the source of so much humour but also so much drama as well. Every line Rocket had been super memorable and funny as hell and Cooper’s delivery of his lines are so good as well. Vin Diesel as the voice of Groot was great, I know he just says “I am Groot” all the time, but the different ways in which he said it was very cool and versatile and just hearing Diesel scream and shout was so cool and reminiscent of The Iron Giant. One surprise for me was Dave Bautista as Drax the Destroyer as he was a lot more enjoyable in the role than I expected. Drax is a maniac driven by revenge and hatred, but he is also very literal and simple-minded and loves chaos. I loved how many funny lines and moments this character had and I really liked what Bautista did with this role, that being said there was some moments where the delivery of his lines could have been better. 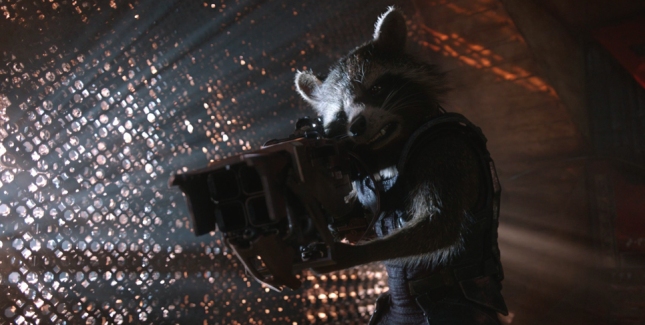 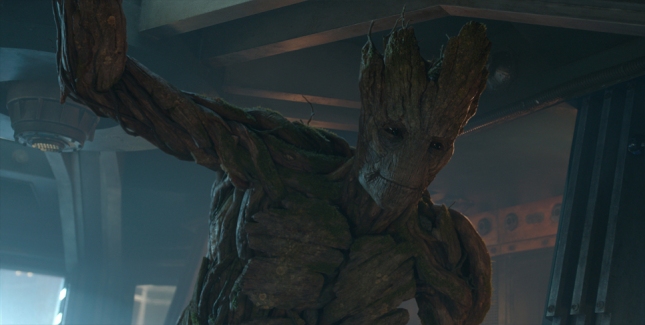 Lee Pace as Ronan The Accuser was pretty decent, he was an evil, corrupt and power-hungry individual who ultimately wanted to rule over all the inhabitants of the galaxy, he was a serviceable villain, but did fall into the trap of Nero from Star Trek and Malekith from Thor: The Dark World in the sense that he ends up not being as well-developed or as interesting as the heroes he is fighting against. Karen Gillan as Nebula was totally hot and great as this female villain who clearly has sibling rivalry with Gamora and hearing about her history with Gamora and Thanos makes her seems really intriguing. Another person of interest is Michael Rooker as Yondu, Rooker is always a joy to watch and he was just as enjoyable as ever here as a man who is closely linked to Quill’s history and a man who looks out for number one and takes out anyone in his way. Rooker was so funny, cool and charismatic, he was such a joy to watch. Benicio Del Toro was great as Taneleer Tivan / The Collector, I feel like he was a little more serious and less cartoony than he was in Thor: The Dark World. I really liked Djimon Hounsou as Korath the Pursuer, he was intimidating and badass as hell. Even though it his inclusion was small, Josh Brolin as Thanos was totally cool and gave us a wonderful look into what to expect from the Mad Titan in the future. And finally the performances from Glenn Close and John C. Reilly as Commander Rael and Rhomann Dey are pretty good too.

When it comes to the presentation I think it is incredible on both the audio and visible side of things. Visually the film is incredibly unique, distinct and just bursting with colour and detail. Along with the story, the cinematography and CGI work on space, planets and even the characters instill a great sense of wonder and mystery to the film and anyone who is well versed in sci-fi will feel glimpses of Star Wars, the J.J. Abrams Star Trek films and Serenity too. The soundtrack maybe just as impressive if not more so than the visuals. This film is filled to the max with nostalgic songs from the 1960’s and 70’s and it is a very eclectic soundtrack which is very unconventional when it comes to Marvel films, but it works on three levels, a) Because of Peter Quill’s love for the music he grew up with, b) It adds to the film’s quirky nature and c) For those who are old enough, it is like stepping into the past and having a crazy nostalgia rush with some really good music. In addition to the great selection of songs, the score by Tyler Bates is pretty good and has some beautiful and epic moments throughout.

In conclusion the Guardians of the Galaxy is definitely a different kind of superhero film, in a way it hardly a superhero film at all. It is truly a film of the science fiction genre with all sorts of humour, action and fun.  and I can’t wait to see it again lol.

So what did you think of the Guardians of the Galaxy? Did it live up to your expectations or not? Whatever your thoughts are be sure to drop them in the comments below.

9 responses to “Guardians of the Galaxy Review”