Howdy ladies and gents of the interweb, time for my late review of episode 20 of Marvel’s Agents of S.H.I.E.L.D. entitled “Nothing Personal“. I was actually gonna review this last week Wednesday but since my schedule has been messed up I haven’t gotten around to reviewing the show until now. 😦 Anyways… So now we’re finally in the final stretch of episode in AoS and it has taken a while to get to this point, but we’re here now and thing are definitely getting more and more interesting. So how has the latest episode fared? Read on and find out.

Just when there’s no one left to trust, Agent Maria Hill returns to team up with Coulson as S.H.I.E.L.D. is being destroyed around them.

This was another great episode filled with more interesting pieces of information being divulged for both the heroes and the villains too. There was more character development for Skye and Ward, Coulson, Fitz and Maria Hill in an episode that was fairly dramatic, emotional and melancholy overall.

Here’s some of my highlights:

There are some other things I wanted to about like when May was climbing out of that grave at the cemetary and that dude saw her, that was funny. Also the way the episode ended before the secret ending was a nice, if somewhat melancholy one. With Maria Hill confirms that S.H.I.E.L.D. is no more and that there is nowhere else to hide, Coulson and his team have no base of operations, no proper home or protection or any official missile. They are just people, people with skills who are being hunted for their association with an organization that has now been destroyed from the inside.

Firstly the way that Skye and Ward were acting around each other was a bit dodgy, I know that they were meant to be lying to each other but I swear the way their back and forth conversations were going, especially in the diner was just unbelievable. By that point in the real world one of them would have just said “Is there something you wanna tell me?” or “Okay let’s cut the crap”. Also I wasn’t keen on the way Adrian Pasdar has been treated, it’s too bad the dude along with the rest of his team get taken out so quickly. 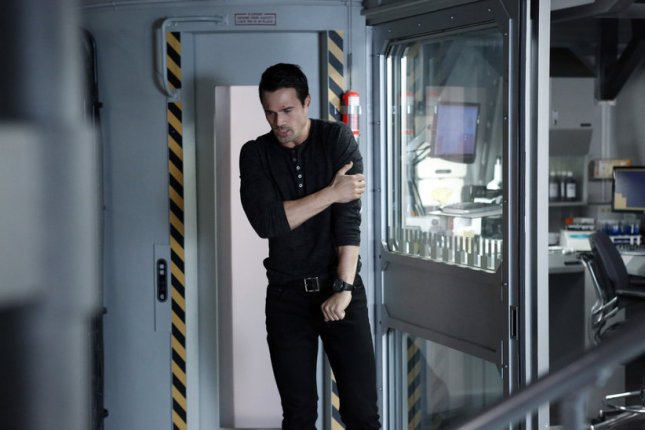 In conclusion “Nothing Personal” is another good episode. This episode had a lot of great high points like the tension and deception between Ward and Skye, seeing Deathlok again and having Coulson and company discover the hidden agenda of Ward was delightful. While the episode didn’t blow me away, it was still a great episode and I am really curious to know what’s gonna happen in the season finale because there’s still so many unanswered questions.

Rating: 8/10 (Conflict and secrets being exposed makes for a good episode)

So what did you think of “Nothing Personal“? Whatever your thoughts drop them in the comments below and I’ll see ya again for episode 21! 😀

Posted by Hypersonic55 on May 5, 2014 in Media, Reviews, Television, TV Reviews

One response to “LATE Agents of S.H.I.E.L.D. “Nothing Personal” Review”