RSS
← Captain America: The Winter Soldier Review
It’s My Birthday And I’l Do What I Want To! :D →

Good day to you ladies and gentlemen, time for a trailer review and this is one I have been wanting to see for the longest time, I am of course talking about the teaser for Teenage Mutant Ninja Turtles. Out of all the summer films that are coming out this year this is the last big one to show any footage off, so now we finally have at least a teaser to work so let’s talk about it!

Have a look at the trailer below:

So my first thoughts after seeing the trailer? Looks decent and interesting.

Now while I’m not jumping over the moon about this trailer, it does look pretty interesting and has some potential to be pretty good. That being said I’m questioning the origins of the turtles, the tone of the film and still questioning to this day the inclusion of Megan Fox.

So can I say about the trailer? Erm, well it looks like a modern, kind of darker interpretation of what has come before. It seems like there is not only a bigger level of crime in New York then ever before (especially if buildings are being destroyed and shit), but also a larger sense of scope than previous films. I mean you’re in New York at one point and then you see the turtles sliding down a snowy mountain slope, there’s definitely gonna be some travelling involved.

It also looks like April and he man who will become the Shredder play a big part in the origin of the turtles. Seems this film is changing up the origin a bit and I’m kind of in two minds about it. But in the end I don’t know how the origin is done, but it is weird to hear  William Fichtner talk about creating heroes and how he and April’s father were trying to make heroes. So clearly he’s implying something about the turtle origins but I guess we don’t know until we get a longer trailer so see the film which is still months away.

Now let’s talk about the Turtles themselves, they look pretty cool if a bit too detailed. Those models that were leaked on the internet a little while ago were a pretty good representation of the characters in the film as they look pretty spot on to how the characters are in the film. The turtles look rough as hell, dark in their shades of green, they’ve got gear and armour on and overall they look pretty nice. While we don’t hear that much of them talking, we hear Raphael, Donatello and Michelangelo speak and they sound decent enough. I think their CGI could use a little touching up, but since it was motion captured it could have looked a lot worse and obviously since the film isn’t out until August the SFX guys have a plenty of time to beef things up.

The best part of the trailer is at the end when Leonardo drops and April backs away only to bump into Michelangelo behind her. And then he tells her not freak out about his mask, he takes it off and then April faints. I liked that moment just because that seems just like something Michelangelo would do, it felt funny and reminiscent of the character.

So how this looks compared previous Ninja Turtles adaptations? Well let’s take the animated adaptations out of the equation and look back at the previous films. Now to this day I’ve only seen the first and last Ninja Turtles films, the 90’s one still holds up pretty well and I still like it a lot, where as the full-on CGI film was okay but seriously dull and lacking in any form of charm. This film looks like it’ll once again be a dark affair with sprinkles of humour and while I’m tired of everything being dark and edgy, if it the tone and atmosphere is done right then it can work so I’m gonna give this new film a chance. 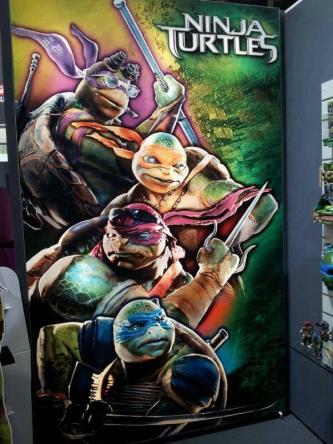 So in conclusion the first teaser trailer for Teenage Mutant Ninja Turtles looks interesting and definitely could be decent if there is the right balance between seriousness and humour. I don’t care for Megan Fox, I just want to see the turtles and so far they look good, as long as Michael Bay’s involvement doesn’t turn the film into Ninja Turtles meets Transformers in terms of the destruction of cities and explosions then I’m all good.

So what do you think of the first trailer of Teenage Mutant Ninja Turtles? Does it excite you or make you cringe with fear? Whatever your thoughts are drop them in the comments below and I’ll see ya on the next review yo. 😀

← Captain America: The Winter Soldier Review
It’s My Birthday And I’l Do What I Want To! :D →