So it seems like last night was a pretty big night for comic news on the Marvel side of town as viewers of Marvel Studios: Assembling a Universe got to see some images relating to Marvel’s upcoming Phase Two & Three films. But the main bit of visual info I want to talk about is the concept art of Scarlet Witch and Quicksilver, two key players that will be showing up in Avengers: Age of Ultron.

So here the images are: 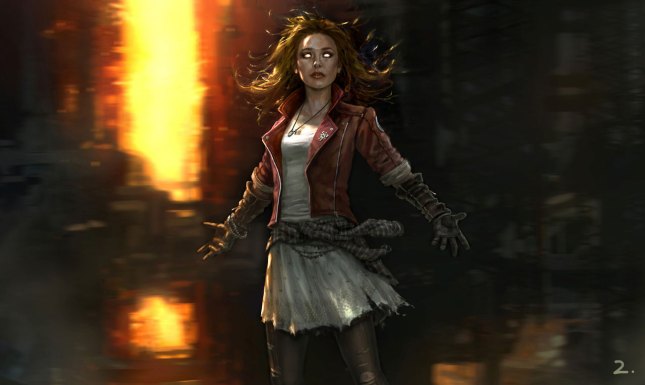 If you were to ask me about my opinion on the look of these characters I would say I like them, a lot actually and they are a lot better than I could have imagined. What I like about them is that they are familiar and yet grounded in our reality and that’s what Marvel have been doing with a lot of the more bizarre/complex superhero/villain costumes. And while I can hear many fanboys in the corners of the internet whining about the new looks of these characters, especially Scarlet Witch, for me I think the designers could have done a lot worse.

So let’s talk about the character uniforms starting with Scarlet Witch. While she is definitely a far cry from her original costume, I feel for the MCU she has a modern look that while not necessarily comic book-esque, still has a unique style to it. And then there’s Quicksilver who in all honesty looks pretty cool, he has pretty cool hair, his costume looks sleek and fast and I can see aspects of the comic character in there. And my god that this look like a better improvement over the version from X-Men: Days of Future Past, no doubt in my mind about that.

Obviously there were more concept images uploaded online related to Avengers 2, Guardians of the Galaxy and Ant-Man, but I just wanted to focus on these and give my quick thoughts on them here on my blog. If you wish to see more have a look at the gallery on superherohype yo.