Howdy ladies and gentlemen, time for another random blog instalment. Today I’m gonna be doing a quick blog post on what has become one of my favourite TV shows in recent times, Regular Show.

So yeah Regular Show, what can I say? It is a truly unique cartoon which is so close to reality and so far from it at the same time. For those of you not in the know, this cartoon centers on the lives of Mordecai and Rigby (pictured above in name order) , they’re two best friends who work together at this park along with an array of other colourful characters who are co-workers and superiors. And episodes mainly focus on Mordecai and Rigby’s everyday lives which always seems to go from normal to frigging insanely weird in just a few moments in each episode. 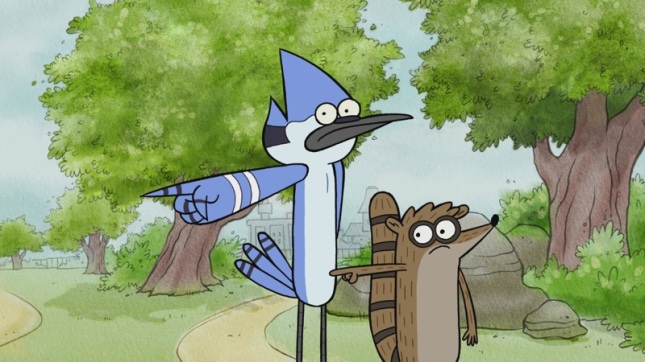 Now I think for around almost two years I’ve known about Regular Show because I sort of caught just around the time I started watching Adventure Time, and at first I thought this show was some knock-off which was alright but not nearly as good as AT. But after my flatemate told me how good RS was, every time I went home I watched a bit of it and over the course of last year it really started to grow on me, and in 2013 I feel like more appreciation for the show has gone up significantly to the point where I actually like it more than AT (I’ll discuss this more at another point).

I think what makes this cartoon so unique is that is so true to life in the sense that the two main characters are friends, their lazy, silly, bicker with each other all the time and the way they act and behave is so similar to most friends in the real world. Plus when the show’s not doing some of its supernatural-based stuff it does deal with issues that most people go through in real life like: sibling rivalry, the highs and lows of relationships, secrets, trust, father issues and so much more and while its never taken to the point where its a life-changing experience, for a kids cartoon it does get pretty deep sometimes. Oh and speaking of it being a kids show, at the same time RS rocks because it has so much stuff there that isn’t meant for kids like guns, the use of the word ‘death’, very adult references to kissing, sex and cursing, I love it. And then of course there is the over-the-top, weird, supernatural elements of the show. RS is one of the most a random shows I have ever seen, just the amount of ‘WTF?’ moments in the show are beyond counting, somehow things just go from simple to frigging unnatural in a matter of seconds and sometimes it gets worse and worse. But again that’s the reason I adore the show so much, because it leads to some absurdly funny scenarios.

In the last week and a bit I’ve been watching the show from the beginning non-stop and I can’t get enough. I’ve just started season 4 and I’m already in love with it. I have never laughed so hard at a TV show since the days when the IT Crowd used be on-air (oh and possibly PhoneShop). This is the best kind of TV for me and it is one of the few reasons why Cartoon Network (a shell of its former self) is still alive these days.

To conclude Regular Show is something I highly recommend for anyone who are either fans of Adventure Time, have lost faith in good cartoons or just fancy something weird and funny yo.