RSS
← Rant 11: Ewwww. I Can See The Snow Outside My Window Again.
Balancing My Cinema Life With My Real Life →

Yay. Finally I have som news to talk about. Sure there’s been loads of news going on recently from return of the original cast for Star Wars Episode VII to the new Star Trek Into Darkness trailer, however there hasn’t been anything I’ve really wanted to blog about… Until now! The Amazing Spider-Man 2 has new information that has caught my interest, let’s see what the deal is from the following article on superherohype:

“Last month, ComingSoon.net revealed the very first look at the new costume set to appear in next summer’s The Amazing Spider-Man 2 . Now, stuntman William Spencer, posting from the New York set, reveals that the design from Marc Webb’s 2012 original will also be used (via Spider-Man News). What, exactly, happens to Peter Parker’s duds that requires a brand new suit remains to be seen, but fans should be pleased to learn that the look of the new costume will likely be explained in the final film.

In The Amazing Spider-Man 2 , Peter Parker (Andrew Garfield) finds, life is busy – between taking out the bad guys as Spider-Man and spending time with the person he loves, Gwen (Emma Stone), high school graduation can’t come quickly enough. Peter hasn’t forgotten about the promise he made to Gwen’s father to protect her by staying away – but that’s a promise he just can’t keep. Things will change for Peter when a new villain, Electro (Jamie Foxx), emerges, an old friend, Harry Osborn (Dane DeHaan), returns, and Peter uncovers new clues about his past.” 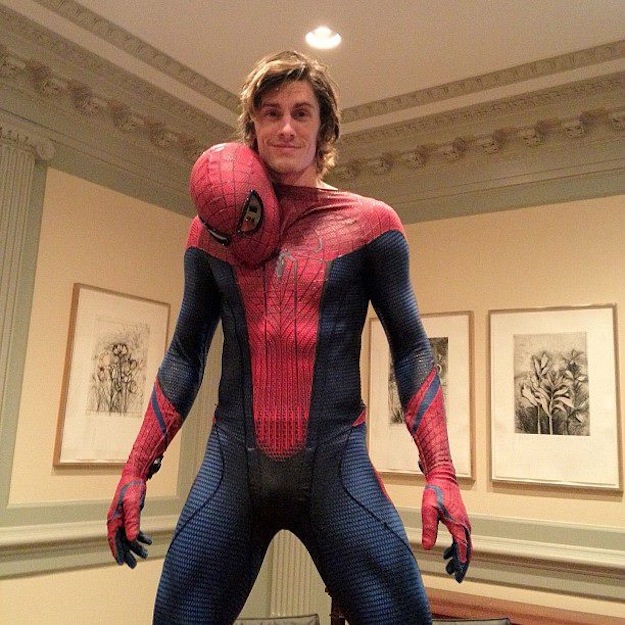 Okay excusing that strange picture, it seems like Parker is gonna go the way of Tony Stark and have more than one suit to use during one film. Now before comic book fanboys decide to attack me for that kind of comparison I am aware that Peter Parker had more than one Spidey suit, not only of his original red and blue one but of many different types depending on the situation at hand. So we now know that the costume from TASM will return but at some point will be replaced by the new one in this sequel. But when they say multiple suits does that mean we may get to see other types of suits like the Scarlet Spider or the Iron Spider? Haha okay those are a bit of stretch but it’d be interesting to see what other kinds of suits the film could produce especially if they were comic book-related.

← Rant 11: Ewwww. I Can See The Snow Outside My Window Again.
Balancing My Cinema Life With My Real Life →