Justin Timberlake Performance At The Grammys 2013 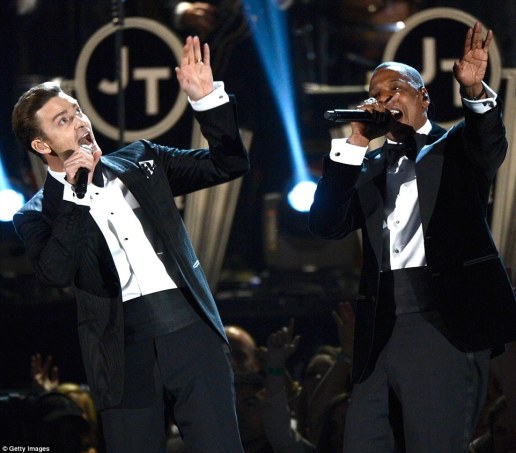 I swear I have Justin Timberlake fever or something because I am following everything that he is doing. But that’s only because I think he is awesome and have waited so long for his return to music, so after I saw what he did at the Grammys last night I just had to talk about it! So after Justin’s stellar performance at the Super Bowl a little while ago I was really looking forward to seeing what he would do at the Grammys this year and I can say that he didn’t disappoint. Check out the awesome video below:

As you can see here JT performs a slightly more condensed version of “Suit & Tie”, with some help from the awesomeness that’s Jay-Z and JT’s awesome band the Tennessee Kids. In this performance we got to see a little more a dance routine with JT and three additional dancers, it was some nice, slick, yet simple choreography that really added some style to the performance. And of course when Jay-Z stepped on the crowd blew up, it’s funny because when I first heard “Suit & Tie” I thought that Jay-Z’s contribution to the track sort of messed with the flow of the song, however now I love it and I think it’s awesome! So after once versus, a chorus and the first part of Jay-Z’s rap the song stops… And then we entered Little Pusher Love Girl (aka Pusher Love Girl)!

Ever since I saw JT’s performance of this at the Super Bowl its been ringing in my ears ever since and at the Grammys it still sounds as sexy as ever. I swear JT’s vocals set by soul on fire, that along with the amazing back vocalists and beautiful sounds of the Tennessee Kids makes for one hell of great live show. The song sounds so old-school and nostalgic with the use of its jazzy and classical instruments and the way the song just builds up towards the end is simply fantastic! You can see that everyone on that stage are having the time of their lives and just having fun. This song to me shows JT in his element with his vocals totally pitch perfect and he’s totally on fire!

In conclusion JT continues to show that he’s the coolest guy around and he still has the power to control the stage whenever he shows up. His new album couldn’t come any sooner! 😀

2 responses to “Justin Timberlake Performance At The Grammys 2013”